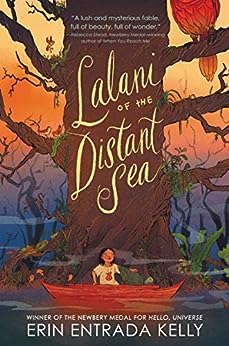 “Inspired by Filipino folklore, Newbery Award̶winner Kelly has woven her narrative with a mythology that is rich and delicious. . . . Readers will be cheering for Lalani in her unlikely quest to save her family and friends, using only the power of her wits, courage, and empathy.” -- Booklist (starred review)

“Fans of Lin’s Where the Mountain Meets the Moon will be enthralled.” -- Bulletin of the Center for Children’s Books

“Beautifully rendered . . . A journey illustrating the importance of story and the power of faith and hope.”
-- School Library Journal (starred review)

“A lush and mysterious fable, full of beauty, full of wonder.” -- —Rebecca Stead, Newbery Medal-winning author of When You Reach Me

“Newbery Medalist Kelly writes a heroic fantasy about making choices, going on a quest, and conquering evil. Scattered throughout the novel are short, beautifully illustrated second-person vignettes allowing readers to imagine they are the mythical creatures Lalani encounters . . . Fast-paced and full of wonder, this is a powerful, gripping must-read.” -- Kirkus Reviews (starred review)

“With lyricism and elegance, Erin Entrada Kelly weaves a rich tale. Powerful and gripping.” -- Soman Chainani, author of The School for Good and Evil series

“Kelly turns from the contemporary realistic settings of the Newbery–winning Hello, Universe and of You Go First to a tropical island–set fantasy world. . . . An excellent job of world-building.”  -- Horn Book (starred review)

“Unlikely but determined heroine Lalani is lovably loyal, kind-hearted, and optimistic even as she faces unspeakable dangers, and her relentless spirit makes her a worthy protagonist in this triumphant tale about fighting for the people one loves and staying true to oneself.” -- Publishers Weekly (starred review) --This text refers to an alternate kindle_edition edition.

Lalani Sarita faces an impossible future. Her mother has fallen ill and is unlikely to recover. Drum and Kul--her stepfather and stepbrother--are cruel and vindictive overlords. There is only cleaning and cooking and mending and errands--for someone such as Lalani, life on Sanlagita involves little else.

So Lalani does what only one girl on the island of Sanlagita has ever done before. She slips into a small scouting boat and sets out across the Veiled Sea, looking for a different future. That other girl never returned. Will Lalani?

Lalani Sarita faces an impossible future. Her mother has fallen ill and is unlikely to recover. Drum and Kul—her stepfather and stepbrother—are cruel and vindictive overlords. There is only cleaning and cooking and mending and errands—for someone such as Lalani, life on Sanlagita involves little else.

So Lalani does what only one girl on the island of Sanlagita has ever done before. She slips into a small scouting boat and sets out across the Veiled Sea, looking for a different future. That other girl never returned. Will Lalani?

4.6 out of 5 stars
4.6 out of 5
91 global ratings
How are ratings calculated?
To calculate the overall star rating and percentage breakdown by star, we don’t use a simple average. Instead, our system considers things like how recent a review is and if the reviewer bought the item on Amazon. It also analyses reviews to verify trustworthiness.
Top reviews

空
3.0 out of 5 stars It's not you it's me
Reviewed in Japan on 2 April 2020
Verified Purchase
I bought this thinking it would have creatures or rituals or places or mythologies that would draw from Filipino folklore, but there was none of that here. It's simply a story that has some words drawn from Tagalog (like "Isa" or "Diwata").

I felt that the writing was good and interesting - and the book was very well-designed with some special chapters that had their own illustrations - but as I didn't have the correct expectations, it was a disappointment.
Read more
Report abuse

Meredith L. Burton
5.0 out of 5 stars Empowering: A Masterpiece of Perilous Adventure in Which the Ordinary Becomes Extraordinary
Reviewed in the United States on 12 September 2019
Verified Purchase
There are certain books that feed the soul and remind readers who they truly are. Lalani of the Distant Sea is just such a masterpiece; a novel that is more than a story. Steeped in Filipino folklore, a fully realized world and vivid characters, Erin Entrada Kelly has given us an incredible gift.

Lalani Sarita lives on the island of Sanlagita, an oppressive place ruled by a vindictive mountain. Everyone is given a job and knows their place. But, a drought threatens the villagers, and Lalani's mother is stricken with mender's disease, an often fatal illness. Hope just might lie to the north on Mount Isa, a paradise of good fortune. Lalani knows she is nothing special, that she is the least likely person to accomplish a life-changing task. However, when a rash wish causes the villagers to blame her for their hardships, Lalani must find a way to help. A perilous quest ensues in which many unusual creatures are met and much adventure occurs.

This story is difficult to effectively describe. While it is clothed as a simple fairy tale, Lalani of the Distant Sea is so much more: a story of the importance of kindness, the need for courage and a journey of self-discovery. I especially love how the ordinary characters must find the courage to take a stand. Hetsbi, one of Lalani's friends, is one of my favorite characters, and I loved the chapters that explored events from his perspective. Practical Veyda, Hetsbi's sister, is also a wonderful character. In love how she nmakes medicine and is determined to help people in her village.
The novel has many complex events, and plot threads eventually culminate in an exquisite tapestry. If you are a bit confused by the many creatures and events, please be patient. All will become plain if you continue the journey.

Lalani of the Distant Sea is a must-read and an unforgettable experience. I loved all the vivid creatures, particularly the Weeping Loset, the Whenbo and the Bai. The author's imagination is amazing, and the creatures spring to life. The world seems so real, and you will be immersed in its savage and oddly hopeful embrace. Enter a world of peril where things are never what they seem. Thoroughly recommended. God bless you all.
Read more
5 people found this helpful
Report abuse

delie dell chua
5.0 out of 5 stars Good book for young readers!
Reviewed in the United States on 2 September 2020
Verified Purchase
This book reminds me of moana. A young lady whose burden is to save he mother, her village and to reach the unkown.

It was a joy to read a book filled with mythology, adventures and lessons, it would be better if there’s more illustrations :)
Read more
One person found this helpful
Report abuse

Myrna
5.0 out of 5 stars Magical Story
Reviewed in the United States on 18 February 2020
Verified Purchase
I bought this book for my daughter for Christmas, and it took me nearly two months to get my hands on it because she kept rereading it. It is amazing. If you loved "The Girl Who Drank the Moon," you'll love this one.
Read more
Report abuse

Kai Lin
5.0 out of 5 stars Courage in the face of fear
Reviewed in the United States on 27 April 2020
Verified Purchase
Loved this gentle story about how to be brave even when you are full of doubts and fears. Highly recommend!
Read more
Report abuse
See all reviews
Back to top
Get to Know Us
Connect with Us
Make Money with Us
Let Us Help You
EnglishChoose a language for shopping.
© 1996-2021, Amazon.com, Inc. or its affiliates