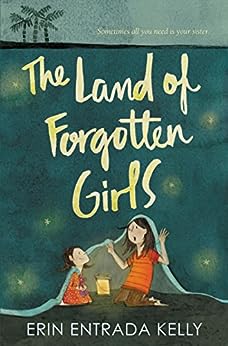 by Erin Entrada Kelly (Author) Format: Kindle Edition
See all formats and editions
Sorry, there was a problem loading this page. Try again.

In this acclaimed novel from Newbery Medalist Erin Entrada Kelly, two sisters from the Philippines, abandoned by their father and living in impoverished circumstances in Louisiana, fight to make their lives better.

School Library Journal called The Land of Forgotten Girls “A charming and affecting novel about sisterhood, the magic of imagination, and perseverance.” For readers of Pam Muñoz Ryan, Rita Williams-Garcia, and anyone searching for the true meaning of family. Winner of a Parents’ Choice Gold Award.

Soledad has always been able to escape into the stories she creates. Just like her mother always could. And Soledad has needed that escape more than ever in the five years since her mother and sister died, and her father moved Sol and her youngest sister from the Philippines to Louisiana. After her father leaves, all Sol and Ming have is their evil stepmother, Vea. Sol has protected Ming all this time, but then Ming begins to believe that Auntie Jove—their mythical, world-traveling aunt—is really going to come rescue them. Can Sol protect Ming from this impossible hope?

Acclaimed and award-winning author Erin Entrada Kelly writes masterfully about the challenges of finding hope in impossible circumstances, in this novel that will appeal to fans of Cynthia Kadohata and Thanhha Lai.

Booklist said, “Kelly’s sophomore novel is both hopeful and heartfelt, but strong emotions are only part of the successful equation here. Told in Sol’s true voice, the direct dialogue brings the diverse characters to vivid life.”

Praise for Blackbird Fly: “Each character in Kelly’s debut novel . . . is portrayed with remarkable authenticity. The awkwardness and intense feelings inherent to middle school are palpable. Children’s literature has been waiting for Apple Yengko―a strong, Asian-American girl whose ethnic identity simultaneously complicates and enriches her life.” -- Kirkus Reviews (starred review)

“Kelly deftly captures the tumultuous emotions of a preteen who is forced to grow up faster than other girls her age.” -- Kirkus Reviews

“A smart, sensitive, and resilient heroine who is authentic and relatable in her strengths and imperfections. This poignant novel would make for a particularly fine readaloud; expect visceral reactions . . . This is a must-read for those kids cringing at their own identities.” -- Bulletin of the Center for Children’s Books

“Will resonate with any student in middle school who has felt different and ostracized. The author has skillfully captured the various characters that populate Apple’s . . . school.” -- School Library Journal (starred review)

“[A] delightful debut . . . Through her love of music . . . Apple starts to soar like the eponymous blackbird of her favorite Beatles song.” -- Los Angeles Times Book Review

“Kelly’s sophomore novel is both hopeful and heartfelt, but strong emotions are only part of the successful equation here. Told in Sol’s true voice, the direct dialogue brings the diverse characters to vivid life.” -- Booklist (starred review)

“[An] enchanting plot propelled by delightful narration. This book will appeal to a broad array of readers, as it has a little bit of everything-fantasy, realism, sisterhood, friendship, suspense, and humor. A charming and affecting novel about sisterhood, the magic of imagination, and perseverance.” -- School Library Journal (starred review)

“This stirring and original story ends on a credibly hopeful note while remaining firmly rooted in reality, and readers who have embraced Sol will be cautiously optimistic for her future. …Sol’s central struggles are gripping. Fans of Rita Williams-Garcia’s family…may particularly enjoy spending time with Sol.” -- Bulletin of the Center for Children’s Books

“Kelly balances the bleak and the beautiful in a novel about the multilayered bond between sisters…Kelly’s strong heroine offers hope in the face of loss.” -- Publishers Weekly --This text refers to an alternate kindle_edition edition.

4.7 out of 5 stars
4.7 out of 5
123 global ratings
How are ratings calculated?
To calculate the overall star rating and percentage breakdown by star, we don’t use a simple average. Instead, our system considers things like how recent a review is and if the reviewer bought the item on Amazon. It also analyses reviews to verify trustworthiness.
Top reviews

Ann mc connell
5.0 out of 5 stars Five Stars
Reviewed in the United Kingdom on 2 February 2018
Verified Purchase
Start to read it, it is for a teenager group read, but enjoying it
Read more
Report abuse

Colin's mom
5.0 out of 5 stars 12 year old loves it
Reviewed in Canada on 12 September 2019
Verified Purchase
Brought it home yesterday, book is half done already- She loves it.
Read more
Report abuse

Amazon カスタマー
5.0 out of 5 stars Inspirational
Reviewed in Japan on 28 June 2021
Verified Purchase
Like a graceful swan, floats into your mind. Tells the story of a rigid life, 2 girls and one cruel stepmother. Amazing book, recommended for all ages.
Read more
Report abuse

Nancy Drew
5.0 out of 5 stars The power of story and sisterly love
Reviewed in the United States on 24 July 2017
Verified Purchase
I became a fan of Erin Entrada Kelly after reading Blackbird Fly. Again, the main character is a tween-age immigrant girl from the Philippines, living in Louisiana. Brought to the New Orleans projects by her father after the death of her mother and sister, Soledad (Sol) is left with her little sister Ming and evil-stepmother when her father returns to his native country for a "visit." A visit that has lasted five years. With a touch of magical realism, not to mention that evil stepmother, Sol uses her storytelling skills (a gift from her mother) to protect Ming from the harsh reality of their lives. She succeeds, until Ming comes to believe that one of Sol's stories is what will ultimately save them. Has Sol gone too far to protect her sister? This is not an "immigrant" story, but one about the love of sisters and story in an alien place.
Read more
4 people found this helpful
Report abuse

saltybadgerbooks
5.0 out of 5 stars Heartwarming and breaking at the same time.
Reviewed in the United States on 5 February 2019
Verified Purchase
I'm not crying, you're crying. Excuse me while I mend my broken heart! Oh my gods, this book hit me right in the feels. It was so creative and I love all the stories woven in! I couldn't help but think of my siblings when I reading. And I of course thought about my younger sister so it was really heartwarming and breaking at the same time.
Read more
One person found this helpful
Report abuse
See all reviews

Erin Entrada Kelly was raised in Lake Charles, La., but now lives in suburban Philadelphia. Her mother was the first in her family to emigrate from the Philippines. Erin's books have won several awards, including the APALA Award for Children's Literature, the Golden Kite Honor Award, and the Gold Award for Fiction from the Parents Choice Foundation.