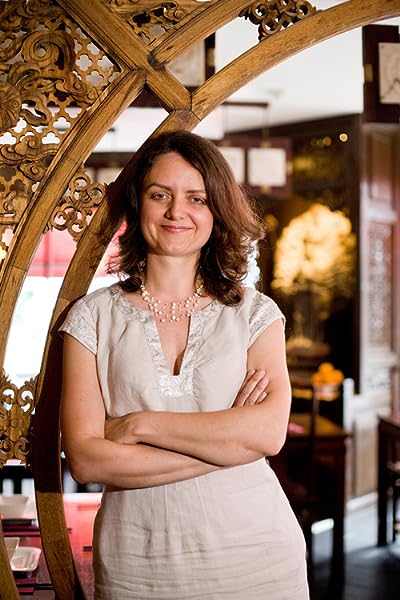 Land of Plenty: A Treasury Of Authentic Sichuan Cooking Hardcover – 27 May 2003

by Fuchsia Dunlop (Author)
4.6 out of 5 stars 182 ratings
See all formats and editions
Sorry, there was a problem loading this page. Try again.
10 Days Replacement Only
Read more Read less
Previous page
Next page

Elizabeth David had it easy. All she had to do was eat her way through France and Italy and translate the essence of the encountered cuisines for a ravenous, literate, English-speaking public. Fuschia Dunlop, on the other hand, went to Chengdu, the capital of Sichuan in China, where she ended up the first foreign student enrolled at the Sichuan Institute of Higher Cuisine. That was nearly 10 years ago. After annual return visits and endless research she has produced, in English, a magnificent introduction to the food and foodways of Sichuan. She is in every way the dharma inheritor of Elizabeth David.

You too may start to salivate halfway through the introduction to Dunlop's magnificent Land of Plenty: A Treasury of Authentic Sichuan Cooking. Perhaps it begins when she explains xian, "one of the most beautiful words in the Chinese culinary language." It describes an entire range of flavor and sensation, "the indefinable, delicious taste of fresh meat, poultry, and seafood, the scrumptious flavors of a pure chicken soup..." Before you know it you are running headlong into a world of 23 distinct flavors and 56 cooking methods (they are all listed at the end of the book). Sichuan is the place where "barbarian peppers" met up with a natural cornucopia and a literary cooking tradition stretching back to the fifth century A.D. Innovation with cooking technique and new and challenging ingredients remains a hallmark of Sichuan. After describing basic cutting skills and cooking techniques, Dunlop presents her recipes in chapters that include "Noodles, Dumplings, and Other Street Treats"; "Appetizers"; "Meat"; "Poultry"; "Fish"; "Vegetables and Bean Curd"; "Stocks and Soup"; "Sweet Dishes"; and "Hotpot." Yes, you will find Gong Bao (Kung Pao) Chicken with Peanuts--Gong Bao Ji Ding. It's named after a late 19th-century governor of Sichuan, Ding Baozhen, which brought on the wrath of the Cultural Revolution for its imperial associations. Until rehabilitation, the dish was called "fast-fried chicken cubes" or "chicken cubes with seared chilies."

Land of Plenty is literary food writing at its best, as well as a marvelous invitation to new skills and flavors for the home cook. Read it. Cook it. Eat it. And take pleasure in the emerging career of Fuschia Dunlop, a big new voice in the world of food. --Schuyler Ingle

Englishwoman Fuchsia Dunlop spent several years in Sichuan, studying first at the university, then at Chengdu's prestigious cooking school. Her fascination with the food of China's obsessively gastronomic province has resulted in Land of Plenty, a comprehensive collection of the best Sichuanese recipes. Even those conversant with Chinese ingredients may profit from Dunlop's introductory glossary of Sichuan foodstuffs and kitchen implements. Her recipes cover those delicious dumplings and other snacks often sold from pushcarts on the region's streets. From there she moves forward into main dishes on the order of Sichuan's noted Ma Pou Dou Fu, a spicy melange of bean curd, ground beef, and chilies. She offers several variations of the dry-fried green beans so popular in American Chinese restaurants. Dunlop's cerebral explanation of Sichuan's 23 flavors contributes enormously to culinary theory, and there's a glossary of Chinese terms as well. Easy-to-follow recipes use ingredients available from any well-stocked Asian American market. This is an essential volume in any world cookbook collection. Mark Knoblauch
Copyright © American Library Association. All rights reserved

With the official publication of her first book [Land of Plenty], Fuchsia Dunlop joins the ranks of literary food writers such as Elizabeth David and Claudia Roden. — The Independent

You may not think you need a book on the cooking of the Sichuan province in Southwest China but this small, perfect book is illuminating and appealing. — The Times [London]

Already one of the essential texts written in the English language. — Time Out

Fuchsia Dunlop has appeared on NPR’s "All Things Considered," "Science Friday," and "America’s Test Kitchen Radio," and is a regular contributor to publications including the Financial Times, Saveur, the Wall Street Journal, and The New Yorker. She trained as a chef in China and has won four James Beard Awards for her writing about Chinese food. She lives in London.
Read more
Tell the Publisher!
I'd like to read this book on Kindle

4.6 out of 5 stars
4.6 out of 5
182 global ratings
How are ratings calculated?
To calculate the overall star rating and percentage breakdown by star, we don’t use a simple average. Instead, our system considers things like how recent a review is and if the reviewer bought the item on Amazon. It also analyses reviews to verify trustworthiness.
Top reviews

Andrean
5.0 out of 5 stars A voyage through the pages. Indepth writing. Specific recipes. A dedicated reader of her books
Reviewed in the United Kingdom on 7 June 2018
Verified Purchase
The kind of author, once you read one of her books, that's it, you are hooked. I have high respect for her books and I'm a dedicated to her. I love this indepth, thourough, super detailed mind and madly researched book. Here is more about reading, getting lost through the pages, reading a story, not so much about photography. Her efforts to create something unique in her books is always felt when you read through the pages. I would have loved it even more if it had more photography in it so that I could learn more in depth about such good writing in this book for a specific cuisine, for a speficic area. This is like an intimate private diary of a passionate author who is willing to put all her heart into it and share it with the world.
Read more
Report abuse

Dune
5.0 out of 5 stars Confirmation
Reviewed in the United Kingdom on 3 July 2011
Verified Purchase
Just to confirm an earlier reviewer's suspicion that "Land of Plenty" is an American edition of "Sichuan Cookery". It is. The sequence of the recipes has been changed, there are no metric measurements and ingredients have been given American names where they differ from English.

There may be other differences, but as I bought this as a backup (having splashed coffee all over my copy of "Sichuan Cookery" due to being too absorbed in what I was reading and not paying attention to where the table ended and free space began) I haven't delved down deep.

mennes
5.0 out of 5 stars excellent book
Reviewed in the United Kingdom on 7 November 2019
Verified Purchase
This is an excellent book. Highly recommended
Read more
Report abuse

eve graham
5.0 out of 5 stars Perfect
Reviewed in the United Kingdom on 21 March 2017
Verified Purchase
Incredible book heaving with authentic, accessible and delicious recipes.
Read more
Report abuse
See all reviews
Back to top
Get to Know Us
Connect with Us
Make Money with Us
Let Us Help You
EnglishChoose a language for shopping.
© 1996-2021, Amazon.com, Inc. or its affiliates