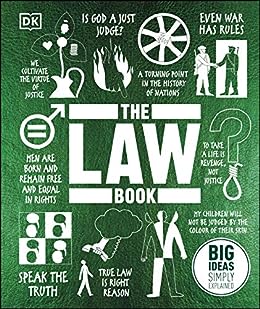 by DK (Author) Format: Kindle Edition
See all formats and editions
Sorry, there was a problem loading this page. Try again.
Read more Read less
Previous page
Next page
Due to its large file size, this book may take longer to download

Professor Paul Mitchell joined University College London as Professor of Laws in 2010, and has previously taught at King's College London, Queen Mary University of London, and Oxford University. His main research interests include tort law, Roman law, and contract law. Much of his work is historical, exploring how and why the law developed as it did. --This text refers to an out of print or unavailable edition of this title.

4.7 out of 5 stars
4.7 out of 5
306 global ratings
How are ratings calculated?
To calculate the overall star rating and percentage breakdown by star, we don’t use a simple average. Instead, our system considers things like how recent a review is and if the reviewer bought the item on Amazon. It also analyses reviews to verify trustworthiness.
Top reviews

Baby A.
3.0 out of 5 stars Hardcover wasn't in good condition
Reviewed in India on 1 July 2021
Verified Purchase
The condition of the book wasn't good, dented binding. Content wise it's a great book
Read more
One person found this helpful
Helpful
Report abuse
See all reviews

Gazza
5.0 out of 5 stars An Excellent Book
Reviewed in the United Kingdom on 3 September 2020
Verified Purchase
Like many of the books in this Big Ideas Simply Explained series, The Book of Law is easy to read and highly informative. Filled with descriptions of different laws and how they came about it begins with the ancient thinkers from over 2500 years ago and concludes with reference to many present day laws, such as Equal Pay, Same-sex marriages and Megan’s Law. Throughout there are meaningful illustrations, photographs and ‘focus boxes’, all of which summarize the text, bringing everything into context so that the reader can get a quick understanding of the text that follows.

So far, I’m about halfway through the book and I feel it is an excellent purchase, particularly for someone like myself who knows very little about the laws that govern us and how many of them came about in the first place. Highly recommended.

Hande Z
4.0 out of 5 stars Legally tuned
Reviewed in the United Kingdom on 28 December 2020
Verified Purchase
From the beginnings of the legal code in the laws of Hammurabi in 2100 BCE to the laws of the modern era that affect the internet order, this book contains not just a history of the development of law across the world, but also vital snippets that will entertain the casual reader as well as educate the law student.

The first law of the sea was the Rex Rhoda of 500 BCE see the uniting of three city states of Rhodes as one federal state, and conquered by the Romans in 146 BCE, the Rhodian Sea Law were enacted and remained influential up to the 13th century. The story and significance of the Magna Carta marks another landmark in this book.

The rise of the rule of law is explained through several chapters including one on the Hague Conventions, and the well-known English case of Donoghue v Stevenson that propelled the law of negligence into the common law world. This case is well summarised and discussed that a first-year law student might find that it is all he needs for class.

Like all books in this series by DK Penguin, every topic is supported by maps and photographs, as well as snippets of side stories. For example, in the chapter on the International Court of Justice, there is a side note on the UN Convention on the Rights of the Child. What may prove most fascinating is the role of law in the current age of seeming chaos. ‘Law in the Modern Age’ touches on subjects that affect all of us – laws concerning the environment, scientific research, and people under disability.
Read more
One person found this helpful
Report abuse

CA
4.0 out of 5 stars LAW HAS A HISTORY TOO
Reviewed in the United Kingdom on 26 March 2021
Verified Purchase
This is a great law reference with a great deal of interesting legal history.
Read more
One person found this helpful
Report abuse

NFB
2.0 out of 5 stars For Democrats only
Reviewed in the United States on 25 October 2020
Verified Purchase
Biased, one-sided, liberal Democrat presentation of legal theories and concepts.
Read more
42 people found this helpful
Report abuse
See all reviews
Back to top
Get to Know Us
Connect with Us
Make Money with Us
Let Us Help You
EnglishChoose a language for shopping.
© 1996-2021, Amazon.com, Inc. or its affiliates