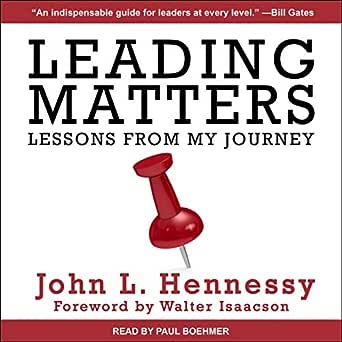 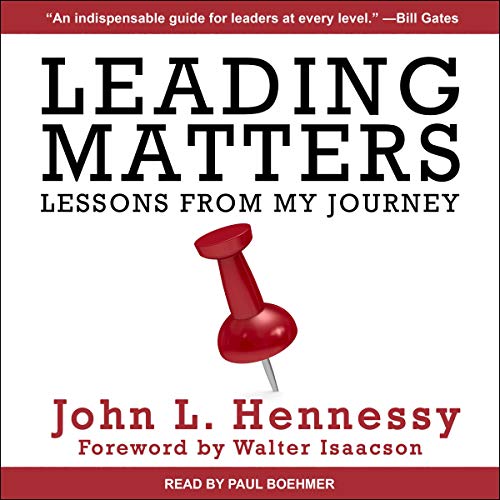 Leading Matters: Lessons from My Journey

4.6 out of 5 stars
4.6 out of 5
10 customer ratings
How does Amazon calculate star ratings?
Amazon calculates a product's star ratings based on a machine learned model instead of a raw data average. The model takes into account factors including the age of a rating, whether the ratings are from verified purchasers and factors that establish reviewer trustworthiness.

Boater
5.0 out of 5 stars From a Stanford Professor
Reviewed in the United States on 24 October 2018
Verified Purchase
A must, must read for all people in academics. I have had the good fortune to work at Stanford for much of John's tenure as President. I have seen him talk, and even had a lunch with him, when I was promoted to full professor. I can't over state how highly I have thought of him over the years. Many of the stories he relayed occurred during my time and it was so interesting to have the "inside baseball view". I highly respect what he has done during his career and what he has done for Stanford. His book gave me insight into how I can improve as a leader, as well as give a view of what leaders of academic centers handle.

If you are in the business world, all of his lessons apply. His view on the essentials of being a great leader is spot on.

The book is very easy to read, and I got through it on a short trip to give some talks.

Xi
5.0 out of 5 stars Great book about leadership
Reviewed in the United States on 13 April 2019
Verified Purchase
The author is a great scientist and a leader with great achievement. The coda in the book led to even more inspiring books!
Read more
Helpful
Sending feedback...
Thank you for your feedback.
Sorry, we failed to record your vote. Please try again
Report abuse

Greg Wientjes
5.0 out of 5 stars Principles in leadership that will help you be more effective and lead a more fulfilled life
Reviewed in the United States on 21 September 2018
Verified Purchase
I’m a big fan of John Hennessy. I knew him while I studied at Stanford, and as he led the university. I’m grateful for the support he gave me, and for the inspiration I felt watching him striving towards excellence. I’ll conclude by reinforcing his message in one word: “Innovate!”
Read more
Helpful
Sending feedback...
Thank you for your feedback.
Sorry, we failed to record your vote. Please try again
Report abuse

David Jones
2.0 out of 5 stars Fair read
Reviewed in the United States on 8 February 2020
Verified Purchase
I found this a little hard to get into and then nothing in it really was inspirational as far as the stories or lessons learned. Many other books on leadership offer more applicable situations in leadership.
Read more
Helpful
Sending feedback...
Thank you for your feedback.
Sorry, we failed to record your vote. Please try again
Report abuse

rangeoflight
5.0 out of 5 stars A landmark guide to leadership
Reviewed in the United States on 15 November 2018
Verified Purchase
Having seen up close for the past twenty years the impact that John Hennessy has had on Stanford and its environs, I can say that this book is the CliffsNotes version of it. Anyone looking to impart lasting and positive change to an organization should spend the few hours necessary to absorb this book.
Read more
Helpful
Sending feedback...
Thank you for your feedback.
Sorry, we failed to record your vote. Please try again
Report abuse

rhodes22
5.0 out of 5 stars great management tool / read
Reviewed in the United States on 1 October 2018
Verified Purchase
superb read with wonderful insights as only Hennessy could provide
Read more
Helpful
Sending feedback...
Thank you for your feedback.
Sorry, we failed to record your vote. Please try again
Report abuse

erichien
5.0 out of 5 stars Inspiration
Reviewed in the United States on 21 February 2019
Verified Purchase
This is a encouraged story from a man who started out with a very different dream but for whom the journey has been both challenging and immensely rewarding.
Read more
Helpful
Sending feedback...
Thank you for your feedback.
Sorry, we failed to record your vote. Please try again
Report abuse