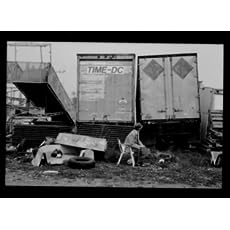 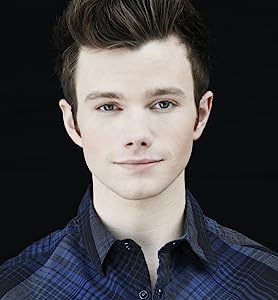 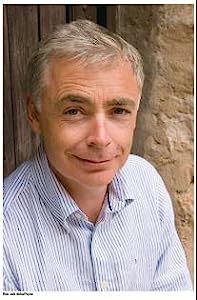 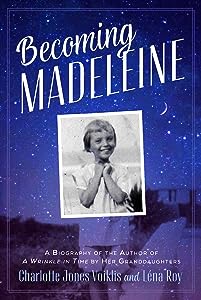 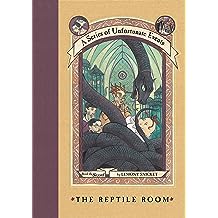 Violet, Klaus, and Sunny Baudelaire are intelligent children. They are charming, and resourceful, and have pleasant facial features. Unfortunately, they are exceptionally unlucky.

In the first two books alone, the three youngsters encounter a greedy and repulsive villain, itchy clothing, a disastrous fire, a plot to steal their fortune, a lumpy bed, a deadly serpent, a large brass reading lamp, a long knife, and a terrible odour.

In the tradition of great storytellers, from Dickens to Dahl, comes an exquisitely dark comedy that is both literary and irreverent, hilarious and deftly crafted. Never before has a tale of three likeable and unfortunate children been quite so enchanting, or quite so uproariously unhappy. 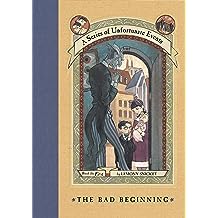 In the tradition of great storytellers, from Dickens to Dahl, comes an exquisitely dark comedy that is both literary and irreverent, hilarious and deftly crafted. Never before has a tale of three likeable and unfortunate children been quite so enchanting, or quite so uproariously unhappy.

Are you made fainthearted by death? Does fire unnerve you? Is a villain something that might crop up in future nightmares of yours? Are you thrilled by nefarious plots? Is cold porridge upsetting to you? Vicious threats? Hooks? Uncomfortable clothing?

It is likely that your answers will reveal A Series of Unfortunate Events to be ill-suited for your personal use. A librarian, bookseller, or acquaintance should be able to suggest books more appropriate for your fragile temperament. But to the rarest of readers we say, "Proceed, but cautiously." 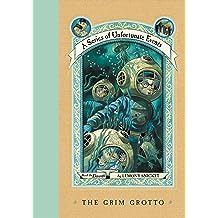 Warning: Your day will become very dark—and possibly damp—if you read this book.

Plan to spend this spring in hiding. Lemony Snicket is back with the eleventh book in his New York Times bestselling A Series of Unfortunate Events.

Lemony Snicket's saga about the charming, intelligent and grossly unlucky Baudelaire orphans continues to provoke suspicion and despair in readers the world over. In the eleventh and most alarming volume yet in the bestselling phenomenon A Series of Unfortunate Events, the intrepid siblings delve further into the dark mystery surrounding the death of their parents and the baffling VFD organisation. 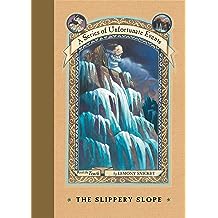 Like bad smells, uninvited weekend guests or very old eggs, there are some things that ought to be avoided.

Snicket's saga about the charming, intelligent, and grossly unlucky Baudelaire orphans continues to alarm its distressed and suspicious fans the world over. The tenth book in this outrageous publishing effort features more than the usual dose of distressing details, such as snow gnats, an organised troupe of youngsters, an evil villain with a dastardly plan, a secret headquarters and some dangerous antics you should not try at home. With the weather turning colder, this is one chilling book you would be better off without. 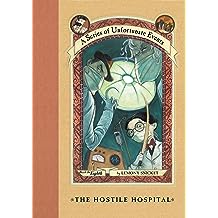 The Baudelaires need a safe place to stay—somewhere far away from terrible villains and local police. A quiet refuge where misfortune never visits. Might Heimlich Hospital be just the place?

In Lemony Snicket's eighth ghastly installment in A Series of Unfortunate Events, I'm sorry to say that the Baudelaire orphans will spend time in a hospital where they risk encountering a misleading newspaper headline, unnecessary surgery, an intercom system, anesthesia, heart-shaped balloons, and some very startling news about a fire. 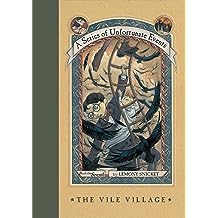 You have undoubtedly picked up this book by mistake, so please put it down. Nobody in their right mind would read this particular book about the lives of Violet, Klaus, and Sunny Baudelaire on purpose, because each dismal moment of their stay in the village of V.F.D. has been faithfully and dreadfully recorded in these pages.

I can think of no single reason why anyone would want to open a book containing such unpleasant matters as migrating crows, an angry mob, a newspaper headline, the arrest of innocent people, the Deluxe Cell, and some very strange hats. It is my solemn and sacred occupation to research each detail of the Baudelaire children's lives and write them all down, but you may prefer to do some other solemn and sacred thing, such as reading another book instead. 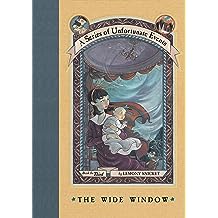 If you have not read anything about the Baudelaire orphans, then before you read even one more sentence, you should know this: Violet, Klaus, and Sunny are kindhearted and quick-witted, but their lives, I am sorry to say, are filled with bad luck and misery. All of the stories about these three children are unhappy and wretched, and this one may be the worst of them all.If you haven't got the stomach for a story that includes a hurricane, a signalling device, hungry leeches, cold cucumber soup, a horrible villain, and a doll named Pretty Penny, then this book will probably fill you with despair.I will continue to record these tragic tales, for that is what I do. You, however, should decide for yourself whether you can possibly endure this miserable story. 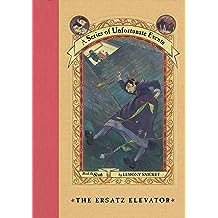 In their most daring misadventure, the Baudelaire orphans are adopted by very, very rich people, whose penthouse apartment is located mysteriously close to the place where all their misfortune began. Even though their new home in the city is fancy, and the children are clever and charming, I'm sorry to say that still, the unlucky orphans will encounter more disaster and woe.

In fact, in this sixth book in A Series of Unfortunate Events, the children will experience a darkened staircase, a red herring, an auction, parsley soda, some friends in a dire situation, a secret passageway, and pinstripe suits.

Both literary and irreverent, hilarious and deftly crafted, A Series of Unfortunate Events offers an exquisitely dark comedy in the tradition of Edward Gorey and Roald Dahl. Lemon Snicket's uproariously unhappy books continue to win readers, despite all his warnings. 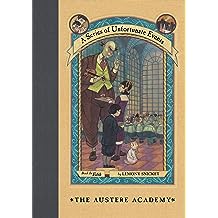 As the three Baudelaire orphans warily approach their new home Prufrock Preparatory School, they can't help but notice the enormous stone arch bearing the school's motto Memento Mori or "Remember you will die."

This is not a cheerful greeting and certainly marks an inauspicious beginning to a very bleak story just as we have come to expect from Lemony Snicket's A Series of Unfortunate Events, the deliciously morbid set of books that began with The Bad Beginning and only got worse. 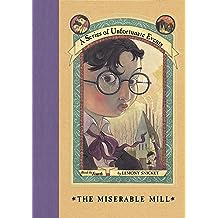 I hope, for your sake, that you have not chosen to read this book because you are in the mood for a pleasant experience. If this is the case, I advise you to put this book down instantaneously, because of all the books describing the unhappy lives of the Baudelaire orphans, The Miserable Mill might be the unhappiest yet. Violet, Klaus, and Sunny Baudelaire are sent to Paltryville to work in a lumber mill, and they find disaster and misfortune lurking behind every log. The pages of this book, I'm sorry to inform you, contain such unpleasantries as a giant pincher machine, a bad casserole, a man with a cloud of smoke where his head should be, a hypnotist, a terrible accident resulting in injury, and coupons. I have promised to write down the entire history of these three poor children, but you haven't, so if you prefer stories that are more heartwarming, please feel free to make another selection. 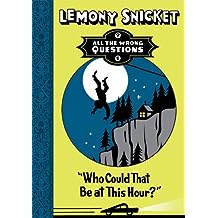 Before he wrote 'A Series of Unfortunate Events', Lemony Snicket asked all the wrong questions. Four to be exact. This is the account of the first question.

In a fading town, far from anyone he knew or trusted, a young Lemony Snicket began his apprenticeship in an organization nobody knows about. He began asking questions that shouldn’t have been on his mind. Are you curious about what is happening in a seaside town that is no longer by the sea? Do you want to know more about a stolen item that wasn’t stolen at all?

.In the tradition of great storytellers, from Dickens to Dahl, comes an exquisitely dark comedy that is both literary and irreverent. You’ll laugh only if you find humour in gothic and mysterious things involving detectives and crime solving.

Lemony’s other literary outings in, ‘A Series of Unfortunate Events’ have sold 60 million copies worldwide and been made into a Hollywood film starring Jim Carrey. And in the future things are poised to get much worse, thanks to the forthcoming Netflix series starring Neil Patrick Harris. You have been warned.

Have you read all four mysterious titles in the Wrong Questions series?

‘Who Could That Be at the This Hour?’

‘When Did You Last See Her?’

‘Shouldn’t You Be in School?’

‘Why is This Night Different from All Other Nights?’

Author Lemony Snicket was born before you were and is likely to die before you as well. He was born in a small town where the inhabitants were suspicious and prone to riot. He grew up near the sea and currently lives beneath it. Until recently, he was living somewhere else. He is a broken man, wracked with misery and despair as a result of writing 'A Series of Unfortunate Events'. He spends his days wandering the countryside weeping and moaning and his evenings eating hastily-prepared meals.

Artist Seth has portrayed suspicious circumstances and shady characters in much of his work. He is a multi-award-winning cartoonist, author and artist, whose works include Palookaville and Clyde Fans. 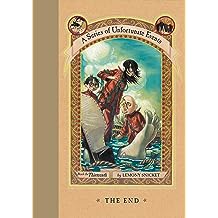 Like an off-key violin concert, the Roman Empire, or food poisoning, all things must come to an end. Thankfully, this includes A Series of Unfortunate Events by Lemony Snicket. The thirteenth and final installment in the groundbreaking series will answer readers' most burning questions: Will Count Olaf prevail? Will the Baudelaires survive? Will the series end happily? If there's nothing out there, what was that noise?

Then again, why trouble yourself with unfortunate resolutions? Avoid the thirteenth and final book of Lemony Snicket's international bestselling series and you'll never have to know what happens.