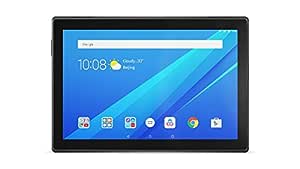 There is a newer model of this item:

Save up to 28% with GST invoice

Save Extra with 5 offers

A Tablet for Everyone in the Family

Beautifully designed, powerfully built, the Tab 4 10 is the quintessential family tablet made for sharing in the modern household. multiple users can open their own accounts for their own customized space within the tablet. And best of all, you can specialize them. The Tab 4 10 offers optional packs to transform the Lenovo Tab 4 series into dedicated kid’s tablets or productivity tablets.

Pattern: Tablet
Technical Details
Technical Specification
Additional Information
Warranty & Support
Warranty Details: 1 year manufacturer warranty for device and 6 months manufacturer warranty for in-box accessories including batteries from the date of purchase Â
Feedback
Would you like to tell us about a lower price?
If you are a seller for this product, would you like to suggest updates through seller support?

Amazon Customer
4.0 out of 5 stars Best budget Android tablet
6 November 2018
Pattern: TabletVerified Purchase
I needed a replacement for my Mi Pad. Sadly, Xiaomi has stopped selling tablets in India, and I was not willing to risk importing one from China. So I had to look elsewhere.

My usage consists of reading ebooks and watching movies. Occasionally I play some games as well.

For under ₹15k, I shortlisted 3 tablets, with requirements being: 10" screen, built-in 4G:

1. Alcatel A3 10 -- disqualified because of small battery capacity (4.6 Ah, vs 7Ah in Lenovo Tab4), Mediatek processor. Also I'm pretty sure that it will not get any OS updates. Their web site didn't do anything to ease this suspicion.

2. Huawei Honor MediaPad T3 -- small battery again (4.8 Ah). Also from online reviews, it seems like they have a heavily customized UI, which I disliked. Once again, future updates are doubtful.

3. This one -- while not perfect, by process of elimination I had no other choice.

My thoughts on this device:

* Good battery life. 7Ah will get you a long way. You can probably get 10-12 hours of usage at full brightness. However, I get worse battery life than I used to with my Mi Pad, which had a similar battery capacity. I think this is because of poorly optimized OS.

* Stock Android. Thankfully Lenovo has decided to leave the UI alone, for the most part. The few modifications it has made are actually useful -- double tap to wake, and productivity interface. The latter is a mode which turns the nav bar into something like the task bar in Windows. Each running app gets an icon there, and you can tap on them to switch between them. I suppose this feature, along with Android 7.1's split-screen feature, plus a keyboard and mouse combo, will turn this tablet into a productive device, but I have not used it this way.

* Not much preinstalled bloat. There were a few (such as Amazon Alexa), but they can be uninstalled.

* Software updates. Since I bought this in Oct. 2018, it has received two OTA updates at the time of writing this, the last of which added the double tap to wake functionality. It's good to see the device still receiving updates. As of now, it is on Android 7.1, July 2018 security patch. According to Lenovo's Upgrade Matrix, it should receive an update to 8.1 as well. Knowing Lenovo, that will probably be the last major update for this device.

* Front-facing stereo speakers. They are loud enough, and more importantly, are at the front, so you don't have to turn up the volume. Quality is strictly ok-ok. You should use earphones if you can.

* LTE capability. This device has 4G, but no VoLTE. This means that you can get internet, but can't make calls... Unless you are a Jio user! Then you can install Jio4GVoice app to make and receive calls. Better to use earphones with built-in mic for this, as it doesn't have an earpiece for calls. The audio is routed to the speakers directly.

* Display. This is one of the areas where Mi Pad is far, far better. Resolution is 1280 x 800. You can see the pixels when you are holding it a bit close during web browsing, for example. But I don't think anyone can do much about it; there are no full HD Android tablets for less than ₹20k I believe.

* No ambient brightness sensor. This was a drawback for me. I hate having to increase and decrease brightness depending on time of day.

* Expandable storage. In the 16GB version, about 8 GB is usable for apps and storage. If this is not enough, you can use Android's 'adoptable storage' feature. Basically, Android will format the SD card and treat it the same as internal storage. If you perform this action, you can move apps to SD card. But keep in mind that once you do this, the SD card contents will not be readable by any other device. This is because the contents are encrypted, and only the device which did the formatting has the key. If you destroy the device, or factory reset it, the contents of the card are lost.

* Jio Apps. Some of their apps are disabled for installation, such as JioTV and MyJio. This is a bummer, because there is no reason why they wouldn't work on this tablet. But there is a workaround. If you get the APKs from somewhere (there is a mirror for APKs... <wink>), then the apps install and run perfectly fine.

* Performance. This tablet has a fairly low end SoC -- Snapdragon 425. Don't expect too much. I see some lag and stuttering when I open heavy webpages or launch heavy apps. But I can live with it.

That's all. Overall, I am happy with the device. But I am also sad that this is the best we get in the price range. I wish Xiaomi continued to sell tablets. The Mi Pad (launched in 2014) would still have better specs than what we get now for the same price.

Ranu
1.0 out of 5 stars My worst purchase from Amazon
17 September 2018
Pattern: TabletVerified Purchase
Got the delivery on 26th August 2018 and since yesterday i.e; 16th September the tab stopped charging..very disappointed as this was a gift to my son and he is very very upset as the product cannot not be properly used for even a month. The return product window got closed on 5th September else would have returned it. Felt cheated.
Read more
205 people found this helpful
Helpful
Comment Report abuse

Hari P.
5.0 out of 5 stars Highly recommend.
12 August 2018
Pattern: TabletVerified Purchase
Its a nice 10 inch tab. It displays text well and did not find any issues with the resolution. Videos also appear great. Quality sound is a plus point. You cannot get such a value for money in any other tabs available today.
Read more
99 people found this helpful
Helpful
Comment Report abuse

MRK
3.0 out of 5 stars Best tab under 15k!!!
26 March 2019
Pattern: TabletVerified Purchase
It is a value for money but if you are using it for multi tasking it will get stuck at times. Worst camera ever. Great for educational purposes.
Read more

Jobster
1.0 out of 5 stars Avoid buying at all cost due to Lenovo support
10 November 2018
Pattern: TabletVerified Purchase
Do not buy this tablet, Lenovo has no plans to provide Android updates which is disappointing considering it has been in the market for less than two years. Currently at Android 7.1 with no offering to 8.0 (latest version 9.0 was released to this summer).

What does this mean? Tablet is a few days old, however support for apps and protection to malware or bugs\fixes will greatly reduce meaning I'm going to have to consider a replacement in another 12 months which is shocking.

My older Nexus 7 cost 15k in 2014 and worked like a charm for two years until support ended, still works on moded ROM.

Amazon Customer
1.0 out of 5 stars Bad Experience , guys don't puch
22 October 2018
Pattern: TabletVerified Purchase
Really very painful to say but it's fact Sudden This tablet stop to work display gone BLACK IN TODAY 22.10.18 VISITED AUTHORISED SERVICE BUT THEY PEOPLE CHECK ED IT AND TOLD NOW IT WORKING U CAN TAKE BUT AFTER 1 HOUR SAME ISSUE FACED