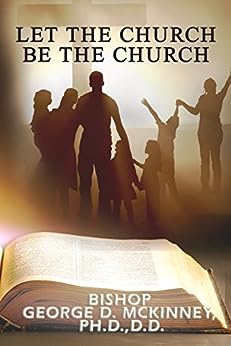 by Bishop George D. McKinney (Author), Peggy L. Rainey (Editor) Format: Kindle Edition
See all formats and editions
Sorry, there was a problem loading this page. Try again.
This book is inspired from a series of sermons delivered by Bishop George D. McKinney, PhD., at St. Stephen’s Church of God in Christ, San Diego, California.
This writing was motivated by my deep love and concern for the sleeping giant of the world – God’s church at large.
If one soul can be awakened to the urgency of the Christian’s commission to herald the Good News in a world where hopelessness is more commonplace than hope, my heart will be made glad and the Kingdom of God will be advanced.
The walls we have erected in the Body of Christ to separate us one from the other must come down. Together, we must go and tell of Jesus and the hope He gives.
Allow this book to challenge your thinking. Contemplate your role in God’s Church and evaluate your quality of involvement and commitment to Jesus Christ.
This book is written not to the unbeliever, but to the believer. It is not to the one who evaluates with a critical eye yet exerts little effort to assist in bearing the burden. Critics hurl their criticisms at the Christian church daily, resulting in little or no positive results.
The Church that is going to prevail is the Church that will not forget to praise God, for Jesus is worthy o praise. Let everything that hath breath praise the Lord. Praise Him in the morning, praise Him in the evening, and praise Him when the sun goes down. Praise Him, because He is God. Praise Him for His mighty acts of salvation. Praise Him, because He is the divine healer. Praise Him, because He leads us beside the still waters.
When the people of God praise the Lord, when we praise Him with the whole heart, when we praise Him with our lips and with our lives, and when we just keep on praising the Lord, somebody who does not have this grace, and who does not know this salvation will hear and be drawn to Him. And the Church will go on.
In today’s economic climate in America, businesses are folding at the rate of one thousand per week. Stores are being boarded up every day.
But, there is one institution that shall never die, and that is the Church. How we need to thank God that we are in this institution that in all of time and in eternity shall never die. Let the Church roll on.
Get in the Church, be in the Church, stay in the Church; and as a part of the Church, and let the Church be the Church! The Church will prevail.

5.0 out of 5 stars
5 out of 5
1 global rating
How are ratings calculated?
To calculate the overall star rating and percentage breakdown by star, we don’t use a simple average. Instead, our system considers things like how recent a review is and if the reviewer bought the item on Amazon. It also analyses reviews to verify trustworthiness.
Top reviews

It started on August 9, 1932, in Jonesboro, Arkansas; George Dallas McKinney was the ninth of fourteen children born in the middle of the depression to his parents, George D. and Rosie Thompson McKinney. His father was a sharecropper and an itinerant San Diego preacher. His parents were very unusual. Because of the poverty and being sharecroppers, time spent in school was about five to six months out of the year, and the remaining months were spent working in the field.

His father had a third-grade education, and his mother about a seventh-grade education. They had a tremendous interest seeing to it that their children received an education. But, his parents had a wonderful philosophy. They taught their children that there would be two avenues to get out of that kind of poverty and the oppression that they experienced. That was, Good Religion and Good Education. So, his parents instilled those ideas into the children, and the consequences were that all of the children that survived finished high school and went to college - some chose the careers of doctors, lawyers, authors, education, and other occupations.

He was married for 47 years to the Late Jean Brown McKinney and the father of five sons. In 2008, Bishop McKinney married First Lady Barbra Jo McKinney, an attorney and former judge. He is especially noted for his work in the area of marriage and family enrichment.

His powerful pulpit ministry has resulted in his choice as keynote speaker at leading conferences and seminars throughout the United States.

His extensive involvement in church and numerous civic affairs have earned him many honors, including listing in "Who's Who in the West," selection by the San Diego Junior Chamber of Commerce as one of the community's ten most outstanding young men in 1966, and a similar honor bestowed in 1969 by the International Association of Aerospace Workers, District 50. He has been a featured speaker at Urbana Mission Conferences and Promise Keepers. His ministry includes conducting conferences on the "Recovery of Family Life" and "Urban Ministry." He was selected as Mr. San Diego, Man of the Year 1995-96.

He has authored several best selling books in hardcopy form, and his new releases of Kindle digital books including, The Theology of Jehovah Witnesses, I Will Build My Church, The Gospel of Mark Accentuated, Let The Church Be The Church, Deepening Life Together - Praying God's Way Series (DVD, Video and Study Guides Kit), Rejoice!, On This Rock, The Azusa Street Revival Revisited, For Those Who Wonder, Christian Marriage: An Act of Faith and Commitment, Cross the Line: Reclaiming the Inner City for God, and The New Slavemasters.

A catalogue of his books and teaching tape albums may be obtained through: