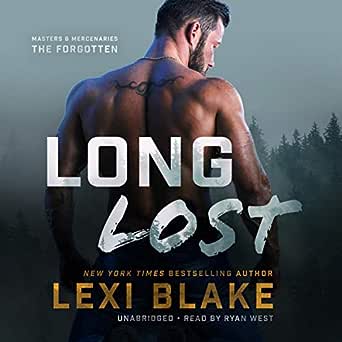 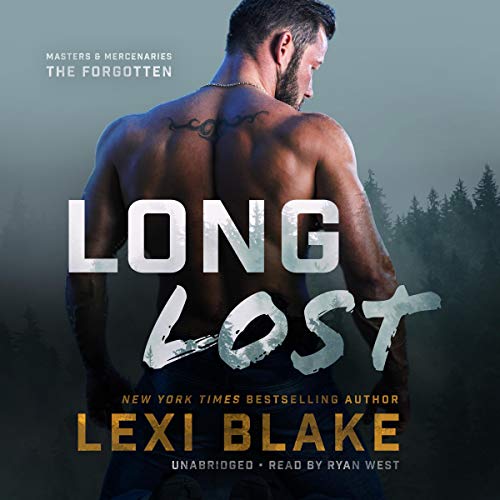 Long Lost: The Masters and Mercenaries: The Forgotten, Book 4

4.8 out of 5 stars
4.8 out of 5
236 global ratings
How are ratings calculated?
To calculate the overall star rating and percentage breakdown by star, we don’t use a simple average. Instead, our system considers things like how recent a review is and if the reviewer bought the item on Amazon. It also analyses reviews to verify trustworthiness.

Meander - Read & Roam
4.0 out of 5 stars 4.5 Stars -- ARC--- Funny Suspensful Captivating tale
Reviewed in India on 4 February 2020
This is the fourth book in the Lost Boys series. This is the first book I’m reading in this series as this can be read as standalone. I haven’t read Masters and Mercenaries series, but I did have some background about McKay Taggart as I have read about them in Lawless series. For better understanding of the book, I suggest you read the series in order if you have time or else dive into this as this can be read as standalone.
Tucker aka Steven is part of a group of 6 men who were rescued by McKay Taggart, and now travel the world searching for their true identities since their memories were wiped clean by experimental drug testing and they were used as soldiers. Even though he doesn’t remember much, he knows he was involved with Dr.Hope McDonalds and has medical knowledge as well that he was way more involved with Dr. McDonald than just as a test subject.
Roni knows him as Steven and he left her 3 years ago when she thought they were starting a new relationship. She is angry with Steven as she thinks he used her and left her for other women and a high-profile life and she ends up being a single mother.
Tucker is hoping to get his memories back and his brothers are hoping some good comes of it. Roni wants to move on with her life, but she has kept secrets from Steven. Once they face each other, Tucker starts remembering the snippets of his past life. As Tucker and Roni try to begin their relationship anew it becomes more and more apparent that there are many entities who want to get to them both in order to find out what they know. Danger lurks at every turn.
As Roni and Tucker remember their time in Paris before he disappeared, will they be able to move past and make a future together? Why is kronberg so invested in them? Will all the lost boys able to move ahead after the revelation?
The intrigue and suspense are really stepped up as the puzzle surrounding Hope McDonald and her insidious plans to using her mind-altering drug is finally is solved. Plot moves in a faster pace. Ezra, Solo, Robert, Ariel, Jax, Levi, Sandra, Rebecca and the McKay-Taggart & Knight team are there every step of the way as this all plays out. Loved several secondary characters especially Erza and Solo, waiting for their story in next book. Sandra is ---"That women is incredibly intimidating women” 😊 I just loved her.
It’s Funny, suspenseful, scintillating and captivating tale ending with an intriguing prologue for her next book. Dive in and enjoy reading.

Kindle Customer
5.0 out of 5 stars Fabulous
Reviewed in the United Kingdom on 20 September 2020
Verified Purchase
Firstly The Forgotten Book 4, Tucker or Steven, Dr Razor has his memory has been eliminated and no chance of knowing how,what who he was before it all happen. The series of the Masters and Mercenaries follows the Hope and faith McDonald storyline and Tennessee Smith. This trilogy comes to the conclusion and twists and turns at every page . Following the secrets and revenge and suspense and corruption brings the McKay and Targett family to at least find who the Lost boys are and lots of surprises thoroughly enjoyable and romance story unfolds between Tucker and Roni.
Read more
One person found this helpful
Report abuse

Charlotte Pawson
4.0 out of 5 stars Tucker’s story revealed
Reviewed in the United Kingdom on 5 March 2020
Verified Purchase
Tucker is the story you’ve been waiting for is he the nightmare of Steven Reasor before his memories were taken or does Roni paint a different story. You travel with Roni and Tucker to see if their love can be relighted or will his past blow up their world. Levi Green is still the puppet master the twisted lies he tells will not help Tucker gain Roni’s trust. Stick with the thrills and have a glimpse of another favourite couples story to be revealed.
Read more
Report abuse

linda wilson
5.0 out of 5 stars WORTH THE WAIT
Reviewed in the United Kingdom on 15 February 2020
Verified Purchase
SO WORTH THE WAIT for Tucker's story and Lexi as usual has done a brilliant job in writing it , and OMG the twist at the end had me shocked ( NO SPOILERS FROM ME) , this book will have you turning the pages until the end , but it's that twist that will have you Surprised , well done Lexi , now I have got to wait until SEPTEMBER for EZRA'S STORY which is on pre order, a 1000% must read that deserves more than 5*s
Read more
Report abuse

HWilks
4.0 out of 5 stars What's not to like
Reviewed in the United Kingdom on 20 February 2020
Verified Purchase
I will start by saying I much prefer the masters and mercenaries books. However, if you've stuck with the forgotten to this point, then like me you want to see it through. This focussed on Tucker and discoverers are revealed. This side line is coming to an end but there is a climax to come. Take that as you wish.
Read more
Report abuse

carol
5.0 out of 5 stars OMFG !!!! Best instalment yet of the Lost Boys
Reviewed in the United Kingdom on 5 February 2020
Verified Purchase
Seriously, Lexi did it again with this firecracker of a book.
The beautiful story of love and trust.
Of intrigue and deception.
Of sex and lust.
And what a shocker of an ending - I do did not see that coming and I am a Lexi expert!
Can't wait for the book
Read more
Report abuse
See all reviews
Unlimited FREE fast delivery, video streaming & more
Prime members enjoy unlimited free, fast delivery on eligible items, video streaming, ad-free music, exclusive access to deals & more.
> Get started
Back to top
Get to Know Us
Connect with Us
Make Money with Us
Let Us Help You
EnglishChoose a language for shopping.
© 1996-2020, Amazon.com, Inc. or its affiliates