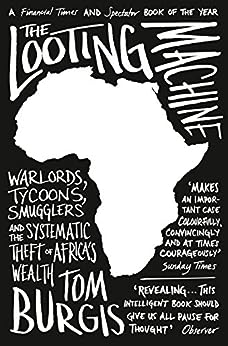 Tom Burgis won a fellowship at the Financial Times in 2006, and has worked on the paper ever since. He has reported from London, Brussels, South America and Africa, writing on the privation and conflict that accompanies the resource trade.

His work has appeared in the Telegraph, the Independent, the Observer, the New Statesman, the Big Issue and Open Democracy, and in 2010 he was shortlisted for ‘Young Journalist of the Year’ at the British Press Awards.

‘A powerful case, through anecdote and evidence, that the dirty trade in raw materials serves individuals’ own enrichment’ The Times

‘A great scrapbook of exploitation. Burgis has the good sense not to present it in an alarmist way, but with an understatement that is far more powerful … [it] is in part a means of self-exoneration, a way of making amends to those he ultimately could not help … He has done a service to some of the world’s poorest people’ Financial Times

‘Excellent. Burgis ensures that we don’t stop wondering who does what in Africa and how we are all party to what Western “investors” are up to. The post-colonial corruption and rape of African resource to the benefit of western consumption is still alive and horribly well’ Jon Snow

‘Burgis has managed to uncover a system responsible for the wholesale looting of Africa’s mineral resources for the benefit of oligarchic and state interests around the world. Burgis, a gifted young journalist, has tracked down all these characters across some of Africa’s most dangerous hotspots and beyond. Vivid, eye-popping and even at times very funny’ Misha Glenny, author of ‘McMafia’

‘Makes an important case colourfully, convincingly and at times courageously as he confronts some of those involved in the pillaging’ Observer

4.5 out of 5 stars
4.5 out of 5
226 global ratings
How are ratings calculated?
To calculate the overall star rating and percentage breakdown by star, we don’t use a simple average. Instead, our system considers things like how recent a review is and if the reviewer bought the item on Amazon. It also analyses reviews to verify trustworthiness.
Top reviews

M. Hillmann
4.0 out of 5 stars Thoughtful, informative and well researched diagnosis of corruption.
Reviewed in the United Kingdom on 30 June 2016
Verified Purchase
With a personal interest and involvement in the oil industry in the Nigerian delta I found those parts of the book about Nigeria enlightening and informative. It is clearly a heavily researched book by a well informed journalist but the detail with which he investigates the corruption and the warring factions in the oil industry in Angola or Equatorial Guinea or the mineral industry in the Congo induced me to skip complete sections.

His thesis is that the resource curse of oil, gas and mineral riches leads to corruption, ethnic violence and extreme poverty rates. The economies of any country with resource riches become distorted as their overvalued currencies emasculate other industries in the country. It is called the Dutch Disease, as experienced by Holland in 1977. As the value of local currency goes up, imports become cheaper undercutting homegrown enterprises. For example the strength of the Nigerian currency due to its oil wealth led to the undercutting and demise of the Nigerian textile industry by cheap imported Chinese garments.

Tom Burgis argues that the resource industry is hardwired for corruption. Kleptocracy, or government by theft, thrives. The revenues from licensing oil and minerals are called economic rent and do not make for good management. Pots of money are at the disposal of those who control the state. The contract between rulers and ruled breaks down because the ruling class does not need to tax the people to fund the government so has no need for their consent.

Tom Burgis is particularly enlightening about the approach and role of the Chinese. Good guanxi requires cultivation of personal ties that carry as much force as any written contract. Not to return a personal favour is a grave social transgression. When applied to politics and business guanxi can become indistinguishable from corruption or nepotism. Tom Burgis’s description of Sam Pa, a Chinese businessman, spy, arms trader who was instrumental in huge Chinese investment in China’s trade with Africa with cheap loans to fund infrastructure repaid in oil or minerals is an example of the grey area between investment and corruption.

But Tom Burgis is fair about the dilemma of the African business men and politicians. There are obligations on successful people for their family and community and the lines between, nepotism, corruption and survival are close. Fall off the looting machine and the consequences can be dire – your house can burn and you and your family can be crushed.

A thought provoking read. It does not make me stop supplying spill control equipment to the Nigerian delta even though I can be accused of complicity in the corruption. Isolation from the issues by European companies is not the solution.
Read more
17 people found this helpful
Report abuse

Kostal
5.0 out of 5 stars A very convincing analysis
Reviewed in the United Kingdom on 15 December 2019
Verified Purchase
I read this book a few years ago but I remember a lot. The analysis is supported by many case studies. It keeps away from the easy trap to blame all the issues of African countries on the former colonial country. It shows the corruption at the head of most states and describes it as the main reason why despite considerable mineral resources most countries are poverty ridden. I recently ordered this book for the son a a friend who is a young journalist, because I think it is a compulsory read to understand Africa. Congratulations to the author.
Read more
4 people found this helpful
Report abuse

Partick Potter
2.0 out of 5 stars Exhaustive but exhausting
Reviewed in the United Kingdom on 1 March 2019
Verified Purchase
This could have been a great book.

The subject matter is of huge significance, the author's passion is matched by his meticulous research. But... The author ain't no writer. The narrative is incredibly dense and poorly structured. It's like being harrangued by an academic.

A big shame as the author has attempted to bring the story of Africa's ongoing exploitation up to date in the 21st century describing the latest rapacious plunderer of Africa's resources into focus; China.

Alex
3.0 out of 5 stars Meat on the bones
Reviewed in the United Kingdom on 23 December 2020
Verified Purchase
I think we all know that Africa’s resources are being exploited by large multinational corporations and a select few of African leaders. We know that billions are made in oil and other natural resources every year and that very little, if any of this money filters down to the man on the streets of Africa. In this way, the book teaches us very little.
However, what this book does do is provide specific details of HOW this is happening- naming key people and corporations and explaining shady business deals that have taken place over the years. This can seem overwhelming to read as these deals are purposely made complicated to ensure that the people involved can make vast sums of money either illegally and/or unethically and their wrongdoings cannot be traced backed to them.
The chapters are quite long, but it is an interesting read. Well worth it if you want to better understand how corruption works in Africa.
Read more
One person found this helpful
Report abuse

Gus
4.0 out of 5 stars Something for everyone - a view of development in Afirca and its links to the rest of the world
Reviewed in the United Kingdom on 10 March 2021
Verified Purchase
There is something for everyone in this book: from the post colonial theorists blaming slow and uneven development in Africa on the evil empires (old and new) through to the other end of the ideological spectrum blaming slow development on African 'politicians' (with overtones of Fanonist Les Damnes de la Terre), all told in a way that remains of interest to the general reader. The book contributes to an emerging literature about what is happenning in Africa in this era of globalisation that also includes books like Blue Dahlia Black Gold which looks specifically at Angola and Meredith's 'The State of Africa'. An interesting question remains - what can be done about all this looting, corruption and expoliotation by the few of the many? If there is one weakness it is that Burgis is (like many other journalists) a bit soft in his critique of developments in South Africa where by time of writing it was patently clear that the looting machine did not only plunder physical resources but also the intellectual capital resources that had built the effective paratstatal economy: including the national electricity siupplier, the airlines, the water board, the land bank, the railways and harbours, etc. etc. in the name of 'cadre deployment' by the ruling alliance. This already started while Mandela was running the show and wasled by comrade Mbeki under the name of 'BEE'. Some useful books that have dealt with the topic of 'State Capture' inSouth Africa (developing a parallel state to steal the country's resources as in Angola) include 'The President's Keepers' (dealing with Zuma), Gangster State (Ace Magashule) and How to Steal a City (Port Elizabeth, recently renamed Gqeberha,in Nelson Mandela Bay). The mining sector had also already been attacked through new legislation that Burgis could have mentioned. The point is that it is not only physical resources that have been looted. But overall, a really good and useful book that will I am sure help many, like myself, to join up the dots of what we see happennin in the world today. Certainly would welcome more books like this.
Read more
Report abuse
See all reviews