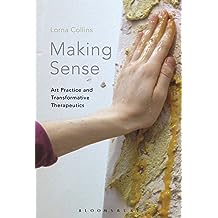 Making Sense: Art Practice and Transformative Therapeutics 25 Sep, 2014
by Lorna Collins
₹3,151.05
Making Sense utilises art practice as a pro-active way of thinking that helps us to make sense of the world. It does this by developing an applied understanding of how we can use art as a method of healing and as a critical method of research. Drawing from poststructuralist philosophy, psychoanalysis, arts therapies, and the creative processes of a range of contemporary artists, the book appeals to the fields of art theory, the arts therapies, aesthetics and art practice, whilst it opens the regenerative affects of art-making to everyone. It does this by proposing the agency of 'transformative therapeutics', which defines how art helps us to make sense of the world, by activating, nourishing and understanding a particular world view or situation therein. The purpose of the book is to question and understand how and why art has this facility and power, and make the creative and healing properties of certain modes of expression widely accessible, practical and useful.
Read more
Other Formats: Hardcover , Paperback
inclusive of all taxes 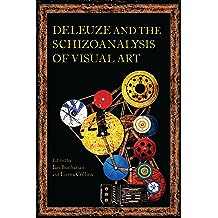 Deleuze and the Schizoanalysis of Visual Art (Schizoanalytic Applications) 31 Jul, 2014
by Ian Buchanan, Lorna Collins
₹3,705.00 ₹9,251.55
You Save: ₹5,546.55(60%)
The concept of schizoanalysis is Deleuze and Guattari's fusion of psychoanalytic-inspired theories of the self, the libido and desire with Marx-inspired theories of the economy, history and society. Schizoanalysis holds that art's function is both political and aesthetic – it changes perception. If one cannot change perception, then, one cannot change anything politically. This is why Deleuze and Guattari always insist that artists operate at the level of the real (not the imaginary or the symbolic). Ultimately, they argue, there is no necessary distinction to be made between aesthetics and politics. They are simply two sides of the same coin, both concerned with the formation and transformation of social and cultural norms. Deleuze and the Schizoanalysis of Visual Art explores how every artist, good or bad, contributes to the structure and nature of society because their work either reinforces social norms, or challenges them. From this point of view we are all artists, we all have the potential to exercise what might be called a 'aesthetico-political function' and change the world around us; or, conversely, we can not only let the status quo endure, but fight to preserve it as though it were freedom itself.

Edited by one of the world's leading scholars in Deleuze Studies and an accomplished artist, curator and critic, this impressive collection of writings by both academics and practicing artists is an exciting imaginative tool for a upper level students and academics researching and studying visual arts, critical theory, continental philosophy, and media.