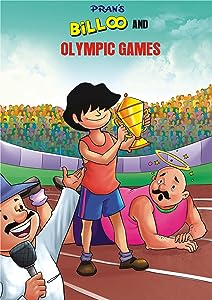 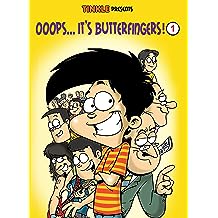 Ooops… It’s Butterfingers! Volume -1 (Tinkle Collection) 1 Feb, 2011
by Luis Fernandes
( 29 )
₹ 98.70
Meet Amar, aka Butterfingers. The clumsy boy who is so accident-prone that he’s sure to break, tear or drop whatever he’s holding. He causes total mayhem wherever he goes. So in this Collection, be prepared to be amazed, thrilled, and most of all, laugh till it hurts!
• It’s Diwali! Amar and his friends have planned a grand Diwali party in Amar’s backyard. But given his tendency to create trouble, no one knows when this grand plan will backfire… and how much trouble it will cause! Best be on your guard when celebrating Diwali with Butterfingers.
• A new girl in Amar’s school! And what’s worse, she’s the daughter of a butterfly researcher! Amar is convinced she’ll be the most boring person ever, until he meets her. And then things take a rather unexpected turn in Butterfingers and the Butterflies.
• Disaster strikes when Amar is tasked with welcoming a famous tennis player to his school! Watch Butterfingers take his clumsiness to dizzying new heights inNew Shoes for Butterfingers.
Read more
Other Formats: Paperback
inclusive of all taxes 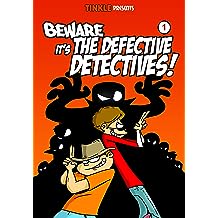 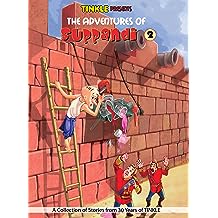 SUPPANDI (VOL 2) : TINKLE COLLECTION (SUPPANDI : TINKLE COLLECTION) 1 Jan, 1992
by Rajani Thindiath
( 250 )
₹ 98.70
If you love Suppandi and his rib-tickling antics, you have it all here! And if you are meeting Suppandi for the first time… get ready to have your sides ache as you laugh endlessly!
Join Suppandi as he hilariously blunders from one job to another!
Who is Suppandi?
Suppandi is the most popular of Tinkle Toons. He has been creating trouble and evoking laughter since January 1983, issue Tinkle 27. He’s a total goof and will make you laugh with his silly antics. Suppandi has had multiple jobs however none of them have lasted very long. He takes instructions from his employers, applies his own literal logic to them and causes total mayhem. The character of Suppandi is based on a Tamil folklore character, Chappandi. Ram Waeerkar, the legendary Tinkle artist gave form to Suppandi. Currently, his daughter, Archana Amberkar, illustrates the strip.
Meet the Cool Cast
Maddy: Suppandi’s best friend who often gives him advice and nearly always regrets it, but he is the only one who will stick with Suppandi and bears his gaffes.
Soupy: Suppandi’s admirer, who usually has Suppandi fleeing her attentions.
Frooty: Suppandi’s crush, she is the only one who understands the intent behind Suppandi’s actions and so always has a smile for Suppandi
About Tinkle
Continuously published since 1980, Tinkle is one of the oldest and most cherished children’s comics magazines in India. It boasts of a large fan following and beloved characters that include such household names as Suppandi, Shikari Shambu and Tantri the Mantri. 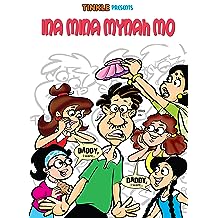 Ina Mina Mynah Mo: Tinkle Collection 1 Feb, 2011
by Luis Fernandes
( 28 )
₹ 98.70
Meet the awesome foursome sisters, Ina, Mina, Mynah and Mo! Each one of them is unique and gives their father a run for his money (literally) as they explore their varied personalities.
• Ina, Mina, Mynah and Mo want pizza for lunch, but their father, Jagannath, will do anything to not pay for it. Watch how he wriggles out of this one in Pizza Anyone?
• Jagannath promises to buy an LCD TV if Mina scores well in maths. But what he doesn’t know is how much trouble this deal will put him in!Read all about it in On Your Marks.
• It’s war between Jagannath and his neighbor! And all over the watering of plants. Who will win this battle? Find out in Green Fingers. 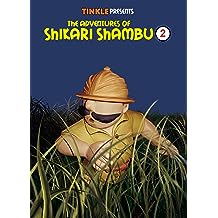 The Adventures of Shikari Shambu (Vol-2) : Tinkle Collection 1 Feb, 2011
by Luis Fernandes
( 24 )
₹ 76.00 ₹ 98.70
You Save: ₹ 22.70(23%)
Shikari Shambu is everyone’s favourite coward. Though he has a reputation as a fearless savior of animals, Shambu is no brave heart. He is terrified of them all! But luck always finds him a way out of the stickiest of situations.
• Shambu is excited to be photographed for the local newspaper.But unknown to him, there’s a bear lurking around. Watch the unexpected happen inBear with Me.
• Shambu thinks he’s outdone himself when he avoids housework by staying out late.But the jungle holds more terrors than simple household chores… Eek! Laugh out loud at Shambu’s antics in Call of the Wild.
• Shambu’s plane has been Hijacked!Will his bravado save the day or cause more chaos than there already is? 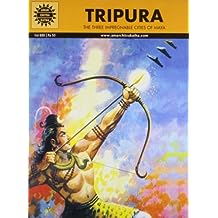 Tripura 1 Feb, 2011
by LUIS M FERNANDES , RAM WAEERKAR
( 20 )
₹ 32.76 ₹ 55.65
You Save: ₹ 22.89(41%)
The asuras rejoiced as they played havoc with both men and gods. Maya, their gifted architect, had created for them three cities fortified with iron, silver and gold and the great lord Brahma himself had decreed that these cities would be indestructible, unless struck by a single arrow. The three cities, known together as Tripura, orbited the earth and only once in a thousand years fell in a straight line, directly one above the other. Would Shiva be waiting to destroy them with a twang of his deadly bow?
Read more
Other Formats: Paperback
inclusive of all taxes 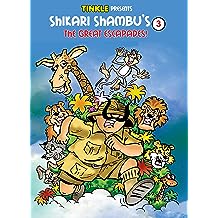 Shikari Shambu's The Great Escapades (Vol-3) : Tinkle Collection 1 Feb, 2011
by Luis Fernandes
( 14 )
₹ 98.70
• While Shambu steals the gifts meant for Shanti’s sister, a langur wreaks havoc in the town. What happens when Shambu meets the langur? Find out inThe Looting Langur.
• Shambuhas been tasked with catchinga man-eater in the forest.And unknown to him, there are also two poachers looking to catch Shambu. Who will catch whom first? Check outEasy Catch.
• Shambu’s nephew Vivekcoaxes Shambu to organize a summer camp for him and his friends. But camping out in the forest turns out to be more trouble than what Shambu signed up for in Shambu’s Summer Camp. 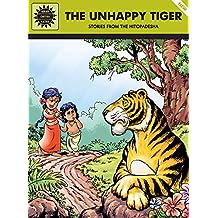 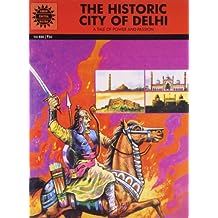 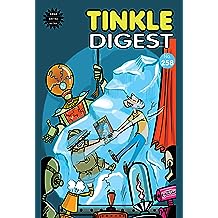 TINKLE DIGEST VOL 258 1 Jan, 1992
by Rajani Thindiath
( 43 )
₹ 55.65
For over 35 years, Tinkle has entertained generations of children with tales of humour, adventure, folklore, mystery, fantasy, and thrills.
Now take home the best stories from all these years of Tinkle in a handy Tinkle Digest. Giggle at the misadventures of our lovable fool Suppandi. Follow Shambu’s escapades as he outruns lions, tigers and bears, oh my! Uncover Tantri’s disastrous attempts to send Hooja packing and grab the throne of Hujli. Enjoy Kalia disrupting Chamataka’s wicked plans. All served alongside delightful folktales, thrillers, mysteries, educational features, and more!
Who is Suppandi?
Suppandi is the most popular Tinkle Toon. Suppandi has been creating trouble and evoking laughter since January 1983, issue Tinkle 27. He’s a total goof and will make you laugh with his silly antics. Suppandi has had multiple jobs however none of them have lasted very long. He takes instructions from his employers, applies his own literal logic to them and causes total mayhem. The character of Suppandi is based on a Tamil folklore character, Chappandi. Ram Waeerkar, the legendary Tinkle artist gave form to Suppandi. Currently, his daughter, Archana Amberkar, illustrates the strip.
Who is Shikari Shambu?
Shikari Shambu is everything he doesn’t appear to be. Just like his name. Although known as Shikari, he is no hunter. He is a conservationist and a wildlife expert. People turn to him in times of crises. Whether it is about rescuing a wild animal or catching a dangerous criminal, this forest ranger is everybody’s go-to guy. But, lo and behold, Shambu is no brave heart. He is secretly petrified of animals and has no love for adventure. All he seeks is a good, fluffy pillow to sleep on and a day that ends with a satisfied tummy. But trouble always finds its way to Shambu and luck finds him a way out. And the combination of the two creates a hilarious mad-venture! Created by former Tinkle editor, Luis Fernandes, artist V.B. Halbe brought this classic Toon to life. Currently, Tinkle’s Art Director, Savio Mascarenhas, illustrates the series.
Who is Tantri the Mantri?
Tantri is the minister who protects the King of Hujli from danger and acts of treason—he is also the man behind them! That’s right. Tantri the Mantri wants to become the King of Hujli, by hook or crook. Alas! All his plans to dethrone Hooja backfire on him in the most comical and bizarre ways. But this mantri is relentless and will try any trick, no matter how ludicrous, to get his hands on the crown.
Did you know?
The first Tinkle Digest was published in January 1992 and contained stories hand-picked by Tinkle’s founder-editor Uncle Pai himself!
About Tinkle
Continuously published since 1980, Tinkle is one of the oldest and most cherished children’s comics magazines in India. It boasts of a large fan following and beloved characters that include such household names as Suppandi, Shikari Shambu and Tantri the Mantri. 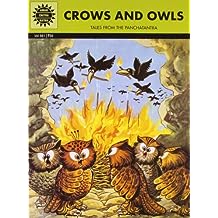 CROWS AND OWLS 22 Jan, 2009
by LUIS M. FERNANDES , M MOHANDAS
( 3 )
₹ 55.65
Pandit Vishnu Sharma found an ideal teaching tool in story- telling. He called his tales, the Panchatantra. Gently guiding his pupils towards a life of honour and nobility, his fables provided joyful entertainment as well. They are read even today 2,000 years later, in various languages, by peoples of diverse cultures. The stories in this collection reveal all that is foolish as well as unkind in the human character and also give some useful advice: pick your friends wisely!
Read more
Other Formats: Paperback
inclusive of all taxes 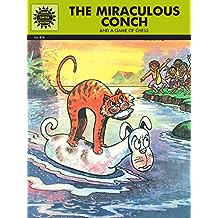