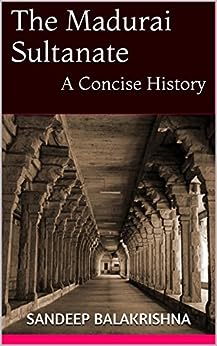 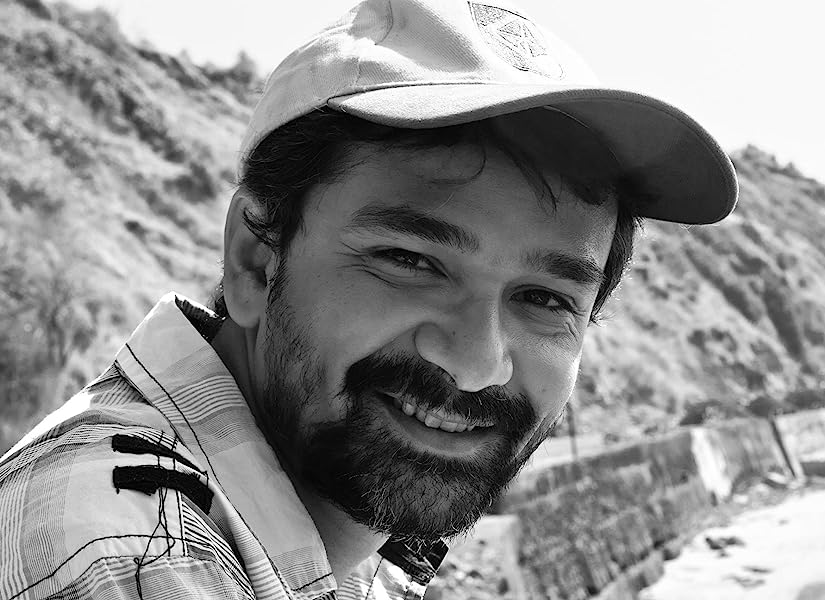 4.2 out of 5 stars
4.2 out of 5
50 global ratings
How are ratings calculated?
To calculate the overall star rating and percentage breakdown by star, we don’t use a simple average. Instead, our system considers things like how recent a review is and if the reviewer bought the item on Amazon. It also analyses reviews to verify trustworthiness.
Top reviews

Pankaj Saxena
5.0 out of 5 stars How Early Islam Ravaged Deep South and Destroyed Hinduism
Reviewed in India on 9 January 2018
Verified Purchase
Before the reader even gets onto to read this book, he is shocked by the title. The Madurai Sultanate? Was that even a real thing? The name of the city of Madurai has now become synonymous with temples and it seems that it was always so. We don’t generally associate the word ‘Sultanate’ with Madurai. Going by the present state of affairs, the south seems to be a lot less Islamic in its populations and a lot more Hindu in its temple rituals. Reading this book by Sandeep Balakrishna makes one realize it was not always so.
Sandeep Balakrishna, with penetrative writing and sharp focus tells us the story of the forgotten Madurai Sultanate, its immense destruction of Hinduism, Hindu society and Hindu culture in deep south. We get to know about the unimaginable cruelty of the Islamic Sultans of Madurai like Ghiyas-ud-Din Muhammad Damghani towards their Hindu subjects, who hunted Hindus in jungles for sport, flayed them alive, bashed the heads of their children on tree trunks and hung and impaled the women on trees. Any regular day in the life of a Madurai Sultan would put any ISIS commander to shame.
Balakrishna tells the history of the Madurai Sultanate, its legendary cruelty towards Hindus, its destruction of Hindu civilization and most of all the common mistakes that the disunited Hindu rulers made while fighting with an enemy like Islam.
Almost seven hundred years later, we seem to be making the same mistakes in 21st century India. While we are fighting on petty matters between ourselves, the long march of Islam does not seem to abate. Let this short but great book be a warning to us.

Subramanyam K.V
5.0 out of 5 stars A Must Read
Reviewed in India on 22 December 2016
Verified Purchase
Unknown to many, a sultanate existed in Madurai for a very brief period, probably 4 decades. It failed to make its impact on the canvas of the world as it was a victim of one palace coup after the other and saw as many as 8 rulers in the short span of 40 years. The rulers harbored such hatred towards the majority Hindus that they were impaled and killed en masse for no reason. These factors too contributed to the decline of the Sultanate.

The author Sandeep Balakrishna starts by giving us a glimpse of the situation in South India in the 13th and 14th Centuries and speaks about the conditions that prevailed during that time. He has done extensive research on this subject and speaks about Pandyans, Cholas, Cheras, the Kakatiyas and the Hoysalas of that day. The succession battles, the lack of unity in the Hindu Kingdoms and the way they failed in stopping the armies of Uluq Khan and Malik Kafur were very well portrayed.

Then the author speaks about the way the Sultans in Delhi squandered the wealth they got from the south and the way their dominions started declaring Independence. Madurai Sultanate was one such offshoot. The author then goes on describe the way the rulers ruled the kingdom and the way they behaved with the other kingdoms in the south. He speaks about the angst in the subjects, the frequent fights with the other kingdoms and the palace coups that plagued the sultanate. He then proceeds to tell as to how that small sultanate became history with the advent of the Vijayanagar empire.

While the core subject of the book is history, the author does not speak about history alone; he portrays the way the Hindu kings brought trouble upon themselves and failed to learn from the attacks that came from the Sultans of Delhi. The accounts of Vira Bhallala, Pratapadura and Kampilanayaka portray the way in which strong Hindu Kings made strategic mistakes and lost it all. I liked the message the author gave here.

When we look at it without any bias, the Madurai Sultanate stands as an example as to how a state should not be governed. These guys pressed the self-destruction button a little quickly and rather unknowingly. You cannot torture your subjects and expect to rule for a long time. This was brought in a very good manner by the author.

My sincere thanks to Sandeep Balakrishna for bringing this book out.

Do pick the book, it is short and is good for a quick read. It has got a lot of facts about South Indian history and is a real eye opener. Do read it when you have time, happy reading.
Read more
11 people found this helpful
Helpful
Report abuse

anonymous
5.0 out of 5 stars Interesting
Reviewed in India on 15 May 2021
Verified Purchase
A quick view of muslim rule in Madurai. Though the narrative says hardly anything about what happened in the area itself, gives an idea of happenings in the surrounding areas and the north. However this is possibly because of these sultans not doing much in their kingdom. Good and quick read.
Read more
Helpful
Report abuse

Lagrange
5.0 out of 5 stars Amazing account
Reviewed in India on 17 December 2016
Verified Purchase
Sandeep balakrishna is doing a great service to Indian history by bringing to light such forgotten facts which should have been taught in BA,MA History courses as well as in schools
Hope some so called eminent historian reads it and include it in NCERT text.
Read more
4 people found this helpful
Helpful
Report abuse

Mayur
5.0 out of 5 stars Quick glimpse of Islamic atrocities in South India
Reviewed in India on 14 November 2019
Verified Purchase
A long essay on how the ambition of Khilji and his General Malik Kufar sowed seeds of Islamic occupation of Madurai and what happened there after. It's a quick read and summarizes timelines along with main protagonists / antagonists.
Read more
Helpful
Report abuse

thanapal
5.0 out of 5 stars A TRUE EYE OPENER
Reviewed in India on 25 August 2021
Verified Purchase
When I started reading I was not at all interested first,for,upto that day I being living in Madurai never knew it was never ruled by a ‘sultanate’.I knew Malik Kafur came looted and destroyed temples.
But this,this great book puts everything crystal clear.If we learn the author’s message India maybe greater once again.
Read more
Helpful
Report abuse

SuperKings2017
4.0 out of 5 stars Very detailed and narrated in a lucid, easy to understand manner
Reviewed in India on 20 July 2020
Verified Purchase
Differentiating “Islamic” Turks from “Hindu” Southern Kings is unnecessary. Those barbaric Turks were no more Islamic than our self serving buffoon rulers who plundered away their wealth. Using religious connotations by the author could have been refined and kept to facts.
Read more
Helpful
Report abuse

Srivatsan V
5.0 out of 5 stars A brief and a quick read on the brief rule of Foreign invaders in Madursi
Reviewed in India on 7 November 2017
Verified Purchase
A least known (still unknown) history of the rule of Islamic invaders for a brief period of around 4.5 decades well researched & written by Sandeep Balakrishna. Although the rule of Sultanate in Madurai was brief, it brought its own share of doom & change in ethos in Madurai ehich is well documented by the author here. Not to be missed out by anyone interested in history
Read more
3 people found this helpful
Helpful
Report abuse
See all reviews

ashford
5.0 out of 5 stars Nice Introductory, Non-exhaustive Summary about a Neglected Part of Bharat's History
Reviewed in the United States on 24 October 2020
Verified Purchase
Sandeep Balakrishna has done fine work covering many other parts of Bharat's history with a new lens to overturn previous whitewashing of the atrocities of Bharat's invaders. This work is no exception. He does fine work summarizing a neglected part of Southern India's history during the time of the Delhi Sultanate expansionism towards the South. It partly explains why the demography of certain regions are inconsistent with their history as temple towns. It would have been nice if the book was longer and more detailed, but the author states clearly in the preface that this is not meant to be exhaustive. Good read overall and recommended for Indic History enthusiasts.
Read more

5.0 out of 5 stars Nice Introductory, Non-exhaustive Summary about a Neglected Part of Bharat's History
Reviewed in the United States on 24 October 2020
Sandeep Balakrishna has done fine work covering many other parts of Bharat's history with a new lens to overturn previous whitewashing of the atrocities of Bharat's invaders. This work is no exception. He does fine work summarizing a neglected part of Southern India's history during the time of the Delhi Sultanate expansionism towards the South. It partly explains why the demography of certain regions are inconsistent with their history as temple towns. It would have been nice if the book was longer and more detailed, but the author states clearly in the preface that this is not meant to be exhaustive. Good read overall and recommended for Indic History enthusiasts.
Images in this review

Sriharsha
4.0 out of 5 stars Would definitely recommend this.
Reviewed in the United States on 15 March 2018
Verified Purchase
A brief account of the very short lived Muhammaden rule that has wreaked havoc on the South of Vindhyas.This reminds us of the need for politocal stability to avoid destruction of civilizations.Would definitely recommend this.
Read more
Report abuse
See all reviews
Back to top
Get to Know Us
Connect with Us
Make Money with Us
Let Us Help You
EnglishChoose a language for shopping.
© 1996-2021, Amazon.com, Inc. or its affiliates