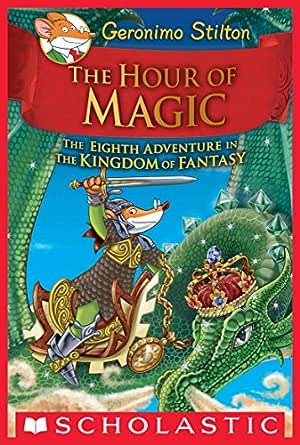 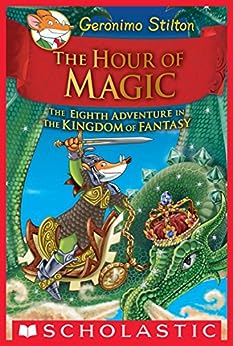 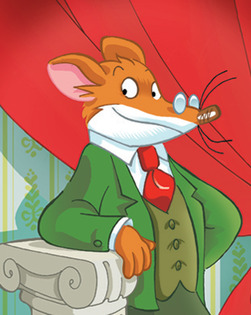 Praise for Geronimo Stilton books:"Lightning pace and full-color design with hook kids in a flash." -- Publishers Weekly --This text refers to the hardcover edition.

Geronimo’s eighth mission in the Kingdom of Fantasy!

I, Geronimo Stilton, was amazed to find myself called back to the Kingdom of Fantasy for another adventure. Blossom, Queen of the Fairies, needed my help -- time itself was under threat!

Something evil was making the hands of the magical Tick Tock Timepiece spin faster and faster. It was causing Blossom to age at an alarming rate . . . and if she perished, so would the entire Kingdom of Fantasy! Holey cheese! It was up to me to restore time and harmony to the land. Could I do it before the clock reached its final hour?
--This text refers to the hardcover edition.

4.6 out of 5 stars
4.6 out of 5
593 global ratings
How are ratings calculated?
To calculate the overall star rating and percentage breakdown by star, we don’t use a simple average. Instead, our system considers things like how recent a review is and if the reviewer bought the item on Amazon. It also analyses reviews to verify trustworthiness.

Amazon Customer
5.0 out of 5 stars G.stilton
Reviewed in India on 8 December 2018
Verified Purchase
I like it very much and it’s very good
Read more

Amazon Customer
4.0 out of 5 stars Great way to hook up kids with reading
Reviewed in India on 17 August 2018
Verified Purchase
My kid is fascinated with this series. The plot is simple and easily understood by any kid of 6 years or older. Stories are fantasy based and is a good way to hook up kids to pick up reading as a habit rather than watching mundane cartoons or spending hours on iPad/mobile. Also helps them improve their language skills in vocabulary, spelling, sentence construction - though this is due to reading a book and not necessarily from this series or author.
Read more
9 people found this helpful
Helpful
Comment Report abuse

Kindle Customer
5.0 out of 5 stars Lovely Lovely book
Reviewed in India on 7 June 2017
Verified Purchase
I have to tell you we are big fans of gerenimo. Simply love the story, feel of the pages, the way words are presented. Most of all it is just such a lovely colourful book. Stories are very good, very clean and still adventurous.
Read more
14 people found this helpful
Helpful
Comment Report abuse

Pritika
5.0 out of 5 stars it's a great book
Reviewed in India on 9 October 2018
Verified Purchase
this book is awesome because Geronimo stilton is saving Blossom ...i now Geronimo would not give up I love Geronimo's books my friends also like Geronimo's books
Read more
5 people found this helpful
Helpful
Comment Report abuse

Bina Sinha
5.0 out of 5 stars Condition of book
Reviewed in India on 25 July 2018
Verified Purchase
Came right on time and the book is new.
Read more

ASWATHY
5.0 out of 5 stars Awesome Book
Reviewed in India on 5 November 2019
Verified Purchase
A fantastic fantsy read for 6 plus kids. My daughter is a big time fan of Geronimo. She loves the colorful illustrations and the interesting plot with each and every book in the Geronimo Stilton series. Thankyou Amazon for such wonderful books !
Read more
Helpful
Comment Report abuse

Cappuccino
5.0 out of 5 stars Awesome
Reviewed in India on 30 January 2019
Verified Purchase
Stories r really interesting .. my son loved it and further ready to explore other books as well 🤫🤫thank u Amazon for such great deals ..
Read more
2 people found this helpful
Helpful
Comment Report abuse
See all reviews

Amanda van Mulligen
5.0 out of 5 stars Another Geronimo hit!
Reviewed in the United Kingdom on 10 May 2017
Verified Purchase
My seven year old loves the Geronimo books. Yet again the illustrations, story and interaction in The Hour of Magic are enchanting and my son will read this over and over for sure!
Read more
Report abuse

Norma wilson
5.0 out of 5 stars My granddaughter love it
Reviewed in the United Kingdom on 24 November 2018
Verified Purchase
Lovely
Read more
Report abuse

Sinockn
5.0 out of 5 stars Five Stars
Reviewed in the United Kingdom on 26 December 2016
Verified Purchase
I bought it for my kid and she enjoyed reading it very much
Read more
Report abuse

Faris Khan
5.0 out of 5 stars Good for multiple reads!
Reviewed in Canada on 29 August 2018
Verified Purchase
My kids love the whole Kingdom of Fantasy series of books. Two boys, 6 and 9 year olds, read the books everyday (and multiple times!) and share the stories with each other and the parents! I have not personally read the books and can only attest to the engagement and excitement of my kids with these books (Kingdom of Fantasy series).
Read more
One person found this helpful
Report abuse

Wholefood Simply
5.0 out of 5 stars Go go Geronimo
Reviewed in Australia on 1 June 2016
Verified Purchase
this book is a great reader. it is exiting and funny!!! I love it!!! you will do that too. Elise Slade
Read more
One person found this helpful
Report abuse
See all reviews
click to open popover
Unlimited FREE fast delivery, video streaming & more
Prime members enjoy unlimited free, fast delivery on eligible items, video streaming, ad-free music, exclusive access to deals & more.
> Get started
Back to top
Get to Know Us
Connect with Us
Make Money with Us
Let Us Help You
EnglishChoose a language for shopping.
© 1996-2020, Amazon.com, Inc. or its affiliates