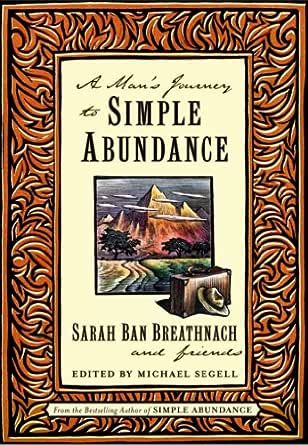 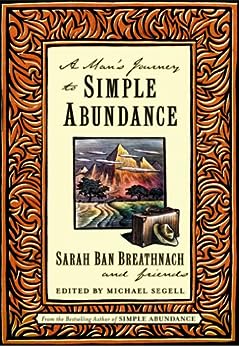 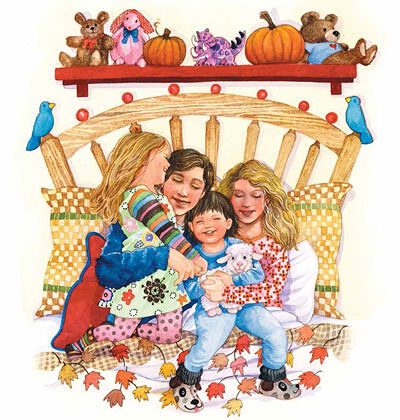 Sarah Ban Breathnach wanted to offer men the same reflective book that she offered women in Simple Abundance. Yet, she also knew that she needed a man to help her represent an authentic male experience, a book that mined beneath the "Men Are from Mars" stereotypes and "Iron John" expectations. So she joined forces with Michael Segell, former "Men's Mind" columnist for Esquire and author of Standup Guy. From there, the duo gathered these contemplative, humorous, and mature essays written by a diverse sampling of men, including a backwoods hermit, mystical rabbi, and world renowned rock star.

Segell writes the poignant introductions to the essays while Ban Breathnach inserts her personal responses at the end of particularly provocative essays. At times she sounds like an interloper in a "boy's only" tree fort club, her comments sounding out of place within these private moments of male bonding. Yet she forces readers, men and women alike, to acknowledge the feminine within the male experience, a lofty goal that we tend to resist. Contributors include Sting, who talks about the difference between thrill seeking and risk taking in "Let Your Soul Be Your Rookie." Adventure writer Tim Cahill writes about "The Bravest Thing I Ever Did"--face his panic disorder as his vomited his way through an un-aired television interview. And Thomas Moore speaks to the ecstasy of melding spirituality and sexuality. --Gail Hudson --This text refers to an alternate kindle_edition edition.

UPON READING THIS BOOK

Man and woman He created them.
Book of Genesis

From ancient times we have been told that human beings were created in Spirit's image. However, as the acclaimed television journalist Bill Moyers reminds us, "being made in the likeness of God does not mean we were made to think alike."

One of my favorite parts of the Bible is the story of Adam and Eve. I find it fascinating that there are two startling accounts of creation in the Book of Genesis, and they completely contradict each other. One could be called Eve's recollection, which has God creating both masculine and feminine energy in a single breath. In Adam's version, of course, he comes first. This original "He Says/She Says" also amused Mark Twain, who wrote The Diary of Adam and Eve, tracing the battle of the sexes back to the observation, "The new creature with the long hair is a good deal in the way. It is always hanging around and following me about. I don't like this; I am not used to company."

To tell the truth, since I'm an incurable romantic, I actually prefer Adam's version because it's the original love story. After Adam is created, he wanders through Eden and then asks the inevitable question of his Maker: "Why are there two of every living creature but me?" God realizes that it's not good for man to be alone. I have always wondered if Spirit created a companion for Adam as an afterthought, or was He just waiting patiently for Adam to have an epiphany? Something or someone was missing.

So Adam is told to take a nap and when he does he has a wild dream. In it, God uses one of his ribs to craft the first soul mate. I think this imagery is exquisite. God removes a bone from the barrier that protects a man's heart to create the woman meant to fill it. The poet e.e. cummings describes this miracle best: "One's not half of two, it's two that are halves of one."

I think A Man's Journey to Simple Abundance deepens and broadens the eternal romance between Adam and Eve. Certainly, it was written in the spirit of bringing men and women closer together by revealing our similarities, not just our differences. Part owner's manual, part guidebook, A Man's Journey to Simple Abundance examines the private pilgrimages that occur in every man's life and the compass that steers him toward life's true north.

One of the most unexpected and meaningful compliments I've received about Simple Abundance is that it has enabled men to understand what's really important to the women they love -- whether it's their wives, daughters, sisters, mothers, or friends. As one man put it, "You've given men the Rosetta stone." We've tried to accomplish the same thing here. I say "we" because this book has been a collaborative effort of the first magnitude.

There's a reason it's taken so long for there to be a men's Simple Abundance. The heart of my philosophy celebrates living authentically. Being a woman, I know how a woman thinks, feels, frets, and loves. But as much as I adore men, I understand as much about them as Eve did on her first day in Eden. Realizing and honoring the differences between the sexes, I knew that if there was to be a men's version of Simple Abundance, I'd need the right collaborator to help me explore the last great spiritual adventure, the quest for understanding male emotions. I found him in Michael Segell, the former "Male Mind" columnist for Esquire and the author of Standup Guy: Masculinity That Works, a personal and provocative dispatch from behind the front lines of the gender wars. Think of us as agents provocateurs dedicated to getting men and women together again on the page. All of the introductions before each essay were written by Michael Segell except for one, which I wrote. Frequently, though, the essays triggered such a personal reaction in me that I felt compelled to flash a feminine response afterward.

For my women readers, I believe this book will surprise you as much as it did me. To begin with, the format is completely different from the original Simple Abundance, which was written as one side of an intimate conversation between two women over the course of a year. In A Man's Journey there are more than fifty male voices illuminating what it means to be a man today with a courage and candor that is at times unsettling but always life-affirming. The topics the men explore celebrate how and where the sacred manifests in their daily lives, and often it's not where a woman might think. Some of the essays are philosophical, some heart-wrenching, some humorous, some ruminative, some just plain quirky, but all are compelling. Authenticity pushes us past our comfort zone, so please be open. The territory may seem unfamiliar at times. At the very least, after reading these essays, you and your partner can look forward to a year's worth of stimulating conversations (besides discussing the kids, money, chores, and how exhausted you both are).

For me, working on this book felt like living on a fault line of the soul; I never knew when my own tectonic plates were going to start shifting, and the aftershocks were equally profound. I believe you'll be as moved as I was by the deep emotional honesty of the writing, whether it makes you laugh or cry. Like the best books, A Man's Journey to Simple Abundance does both.

Toward the end of Adam and Eve's diary (as channeled by Mark Twain), the woman confides: "The Garden is lost, but I have found him, and am content." As for the man, he admits, "Wheresoever she was, there was Eden."

Man or woman, may this book bless you with equally surprising truths and extraordinary perceptions. Perhaps we will have another shot at experiencing Heaven on earth together. At least it's worth a read.

Copyright © 2000 by Simple Abundance, Inc. --This text refers to an alternate kindle_edition edition.

Breathnach has established something of a franchise with her best-selling Simple Abundance daybooks and journals. Here, she inaugurates her new Scribner imprint with a collection of 50-plus pieces on men's experiences, edited by Michael Segell, a former Esquire editor and columnist. The book's sections cover family, emotional and moral concerns, men's roles and obligations, success and failure, amusements and obsessions, and the deepest values in life. Most entries open with a Segell introduction and are followed by a brief reaction from Breathnach; each section closes with "Thoughts for the Road," a list of suggestions. Contributors include respected novelists (Rick Bass, Jim Harrison, Reynolds Price), journalists (Roy Blount, Harold Evans), pop-culture figures (Sting, director Garry Marshall), and representatives of religious and spiritual movements (Rabbi Shmuley Boteach, Roshi Jakusho Kwong, Thomas Moore). They also include a hermit, a surfing champion, a high-tech entrepreneur, aviators, scientists, and academics. As the sample authors suggest, while the dominant forms here are memoir and meditation, the volume's essays (most not previously published) also include humor and exhortation. Likely to circulate where Breathnach's previous works have been popular. Mary Carroll
Copyright © American Library Association. All rights reserved --This text refers to an alternate kindle_edition edition.

Sarah Ban Breathnach's work celebrates quiet joys, simple pleasures, and everyday epiphanies. What began as a personal safari to unearth her authentic self, transformed into her number one New York Times bestsellers Simple Abundance: a Daybook of Comfort and Joy, and Something More: Excavating your Authentic Self. She is the publisher of Simple Abundance Press, as well as president and CEO of Simple Abundance Inc. She divides her time between Maryland and New york. --This text refers to an alternate kindle_edition edition.
Read more

4.0 out of 5 stars
4 out of 5
16 global ratings
How are ratings calculated?
To calculate the overall star rating and percentage breakdown by star, we don’t use a simple average. Instead, our system considers things like how recent a review is and if the reviewer bought the item on Amazon. It also analyses reviews to verify trustworthiness.

monroe
5.0 out of 5 stars Looks great
Reviewed in the United Kingdom on 4 November 2014
Verified Purchase
Bought as a gift, I have bought several if the comfort and joy books for women that I thought I would try this for a relative as a gift. Arrived fast and packaged well.
Read more
Report abuse

lsanderson65
5.0 out of 5 stars Five Stars
Reviewed in the United Kingdom on 14 February 2016
Verified Purchase
bought for my husband as i like women's version,
Read more
Report abuse

Jen
5.0 out of 5 stars Really thoughtful read
Reviewed in the United Kingdom on 27 February 2014
Verified Purchase
I'm glad I bought and read this book. Certainly got me thinking. I am a woman raising a son so wanted to see what the author had to say. A worthy read.
Read more
Report abuse

Joanne Smith
3.0 out of 5 stars Not read
Reviewed in Canada on 27 January 2014
Verified Purchase
I bought the hard copy. Great book. I love this author. She is incredibly enlightening to help men become real.
Read more
Report abuse

Gentleman Farmer
3.0 out of 5 stars Limited audience due to some explicit content
Reviewed in the United States on 30 June 2018
Verified Purchase
There were many good articles in here but one or two were not to my taste being a little explicit about sexuality. I wrote the author with my comments. I had planned to give a copy to each of my sons because I really like the Simple Abundance books for women, but could not do so with these articles in the volume. I was disappointed and clearly am not the right audience for this work.
Read more
2 people found this helpful
Report abuse
See all reviews
Back to top
Get to Know Us
Connect with Us
Make Money with Us
Let Us Help You
EnglishChoose a language for shopping.
© 1996-2021, Amazon.com, Inc. or its affiliates