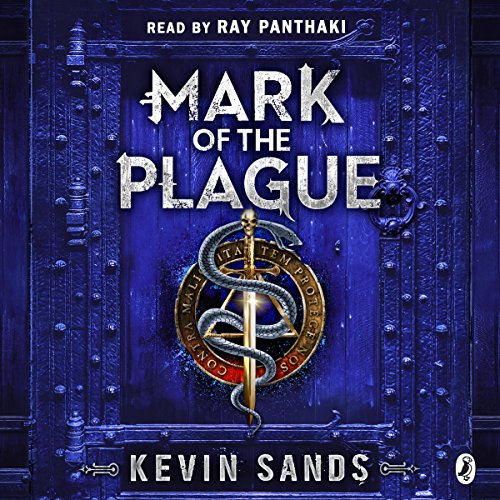 Mark of the Plague: A Blackthorn Key adventure

Penguin presents the unabridged downloadable audiobook edition of Mark of the Plague by Kevin Sands, read by Ray Panthaki.

Boils, blood and a burning fever - the black death has returned to London....

As the dreaded sickness spreads through the city, striking down rich and poor alike, an unknown man arrives with a miracle cure. But when an assassin threatens the life of the city's new saviour, young apothecary Christopher Rowe and his faithful friend Tom must risk their lives to untangle another dark conspiracy. And when the plague strikes close to home, the stakes are raised higher than ever before.

The breathtaking sequel to The Blackthorn Key - shortlisted for the Waterstones Children's Book Prize.

4.8 out of 5 stars
4.8 out of 5
198 global ratings
How are ratings calculated?
To calculate the overall star rating and percentage breakdown by star, we don’t use a simple average. Instead, our system considers things like how recent a review is and if the reviewer bought the item on Amazon. It also analyses reviews to verify trustworthiness.
Top reviews

Ritu
4.0 out of 5 stars Good but not as good as the first one
Reviewed in India 🇮🇳 on 30 November 2017
Verified Purchase
I liked this book ver much and if you have read the first one you will like this one too. I must admit that it was not as much fun as the first one.
Read more
Helpful
Report abuse

cs
5.0 out of 5 stars Ready to read
Reviewed in the United Kingdom 🇬🇧 on 22 September 2018
Verified Purchase
Very excited to have bought this second book in the series. Can't wait to get started
Read more
Report abuse

Amy M
4.0 out of 5 stars Fun even for an adult
Reviewed in Australia 🇦🇺 on 13 March 2019
Verified Purchase
The characters in these books are so likable. I enjoyed reading 1 and 2 and I'm a 35 year old adult. I liked the adventure and the codes. The first book in the series was my favourite of the two. I'm usually not into reading more than one or two in a series but I will read the third. There's enough recap in the second book to remind you of the first so it's an easy book to come back to after you read something else and have a break.
Read more
Report abuse

dolly larkin
5.0 out of 5 stars Reading is the window to your soul
Reviewed in Canada 🇨🇦 on 30 January 2020
Verified Purchase
It was for my Grandaughter and her class is doing book report on it. She loves it she has the whole set now.
Read more
Report abuse

Uumellmahaye
5.0 out of 5 stars The story continues well
Reviewed in Germany 🇩🇪 on 5 February 2019
Verified Purchase
Without wanting to reveal too much to future readers - the cliffhanger of book one is added to through the plague that opens up a new chapter in the life of Londoners. Definitely a good read.
Read more
Report abuse

Geoffrey Wiseman
3.0 out of 5 stars Enjoyable Read
Reviewed in Canada 🇨🇦 on 29 July 2018
Verified Purchase
Entertaining read with interesting puzzles, a bit of science, a touch of humor. This is the latest series I am reading with my son and we are enjoying it.
Read more
Report abuse
See all reviews