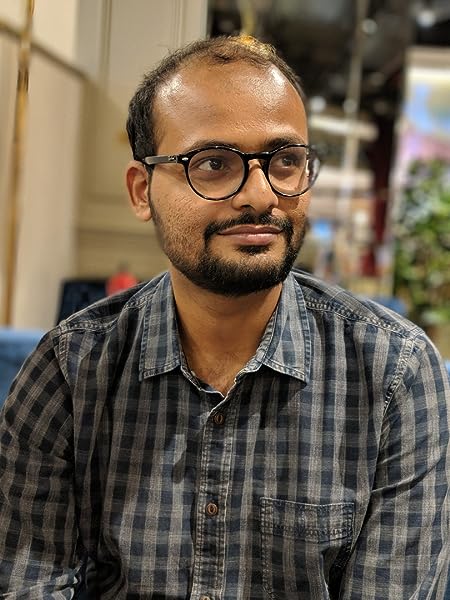 by Girish Dutt Shukla (Author)
4.5 out of 5 stars 101 ratings
See all formats and editions
Sorry, there was a problem loading this page. Try again.
FREE delivery: Thursday, Sep 30 on orders over ₹499 shipped by Amazon Details

No Cost EMI: Avail No Cost EMI on select cards for orders above ₹3000 Details
Bank Offer (2): Get up to Rs 1250 Amazon Pay Gift Card with Citi Credit EMI transactions See All
Partner Offers: Get GST invoice and save up to 28% on business purchases. Sign up for free Details
See 1 more
Pay on Delivery
10 Days Replacement Only
Amazon Delivered
No-Contact Delivery
What is Pay on Delivery (Cash/Card)?
Pay on Delivery (Cash/Card) payment method includes Cash on Delivery (COD) as well as Debit card / Credit card / Net banking payments at your doorstep.
Amazon Delivered
Amazon directly manages delivery for this product. Order delivery tracking to your doorstep is available.
No-Contact Delivery

Page 1 of 1 Start overPage 1 of 1
Previous page
Next page
Start reading Maroon In A Sky Of Blue on your Kindle in under a minute.

4.5 out of 5 stars
4.5 out of 5
101 global ratings
How are ratings calculated?
To calculate the overall star rating and percentage breakdown by star, we don’t use a simple average. Instead, our system considers things like how recent a review is and if the reviewer bought the item on Amazon. It also analyses reviews to verify trustworthiness.

Prarek Pradhan
5.0 out of 5 stars One of the best books I have read in 2020
Reviewed in India on 15 October 2020
Verified Purchase
One of the most engaging stories I have read so far. I do not typically write reviews, but this book deserves the exception. I pre-ordered this book after coming across one Instagram post by the author Girish Dutt Shukla. The whiff of mystery, grief, love and tragedy made me instantly want to read it.

The author must have spent a lot of time on this book cover because it felt like the book was meant to have this design. Kudos to the brain and execution behind it. I already had read the first three chapters from the author's website, so I had a fair idea of where this is going. The book follows the life of Onir, a boy just beginning to enjoy his life with his love Palchinn. And it is genius how the name Palchinn means a moment, and their love only lasts a moment. A terrible tragedy breaks apart these young lovers, and what follows is a thrilling saga of how Onir deals with the pain.

I believe good writers do not need complicated sentences to touch their readers' hearts, and maybe that is another reason I love this book. I was totally engrossed and invested in Onir's life. I strongly suggest that you read this book in parts, to truly enjoy the book and the harsh realities of life it portrays. This is not a typical sad love story, and it deserves all the praise and appreciation. Good job!
Read more
4 people found this helpful
Helpful
Report abuse

Tarun
5.0 out of 5 stars What A Stellar Debut!
Reviewed in India on 13 October 2020
Verified Purchase
Read the book Maroon in a Sky of Blue by debut author Girish Dutt Shukla. And boy, I was impressed. I thoroughly enjoyed every bit of this.

Now, where do I start- This one is a remarkable debut. This book has ushered in an era where this kind of fiction is in dearth quantity. But the way the author has written it weaving together loss and gain, reality and illusion, he deserves all the credit.

In hindsight, when this book came out on 11th October, the craze could be felt. Intelligently penned, fluent story-line and captivating thought process. From the moment you start reading, you are hooked into it like anything. The plot is engrossing and you never feel like keeping the book down. The literary genius in the author is seen in the way he leaves very little room for what to expect. As you leaf through the pages, you never know what is going to come to light.

In a nutshell, this stunning debut novel is what you should read if you want to indulge in a plot that is engrossing as it is stirring. For those of you who are a sucker for unexpected endings and for one’s who want to experience a mental health journey through a realistic lens of life.
Read more
4 people found this helpful
Helpful
Report abuse

Amazon Customer
5.0 out of 5 stars Loved the book Maroon In A Sky Of Blue!!
Reviewed in India on 13 October 2020
Verified Purchase
Truly an interesting read. I have just finished reading the book, and am still overwhelmed by it. I exceptionally loved the author’s ability to connect with his reader; his simple language flow just grips you. The best part of the book is its readability.

The story revolves around Onir and his dead girlfriend Palchinn. Other than that, Lavin, an amiable fellow and friend to the protagonist and Ziya are the chief characters. While you read through the pages, what really connects you with the characters is how relatable they seem. As a reader, I was able to sympathize with the characters fully. This perhaps explains why when you finish reading the book, you will feel a daunting sense of emotions. The unexpected ending to the book is profound and emotional.

All in all, the book is a gasping, desperate, powerful read that is bigger on the inside than outside. It's a little bit about dying, but more about being alive.
Read more
4 people found this helpful
Helpful
Report abuse

Mahvish Mujib
4.0 out of 5 stars Marooned my mind.
Reviewed in India on 30 October 2020
Verified Purchase
The story revolves around Onir, an adolescent who is extremely silent, shy, bottled up. His life has been devoid of fun and pleasure until Palchinn arrives and changes everything. Though, their love story cease to exist due to a drastic event which affects Onir deeply and changes his as a person.
Ziya, enters his life after a while and Onir is in dire need of someone whom he cab open up with. Now, the mystery is, who is Ziya? Is she what Onir thinks of her?

1) The writing style is easy and coherent. The book is written in such a beautiful manner that I felt myself to be in Onir's shoes. The description of grief is splendidly done. I've annotated a lot during reading. The author managed to sketch a motion picture for the readers to savour. I am deeply affected by Onir's situation. The writing is expressive and it makes the reader feel the plight of the protagonist.

2) The book is medium paced. Initially it lagged behind a little but later it managed to run at an appropriate speed.

3) The last 20 or so pages gave me a freakin panic attack. The plot turns upside down completely by the end of the story. The psychological angle in the story is astonishing. I couldn't sleep after reading the book. The protagonist's situation felt personal. I felt sweaty, gut-wrenched, suffocated. I was like, " tf, bro, what?" by the end.

4) The author has constantly talked about many issues which lead to mental health issues. Onir, the protagonist faces a lot of such issues like parental negligence, peer ignorance, inferiority complex, inability to make acquaintances etc. The book also describes how your negligence can char someone's life so deeply as to not allow a moment of recovery. Mental health stigma should be dissolved before it destroys more of us slowly.

5) The book talks about seclusion, negligence, mockery, loneliness, suffocation and mainly illusion.
The book is splendid and trust me if you want a blend of philosophy + psychological twist. I highly recommend it.
Read more
One person found this helpful
Helpful
Report abuse
See all reviews

Alok K.
5.0 out of 5 stars Uniquely Thrilling Read
Reviewed in the United States on 28 January 2021
Verified Purchase
Maroon in a Sky of Blue was a welcome break from some typical romantic fiction. In a sea of teenage/college romance books, finally I found one written for a mature audience with layers of intricacy and character development commendable for a debut book by an upcoming author.

The way characters are developed, the attention to detail around settings and scenery, the focus on what might be really interesting topics from a mental health perspective, rarely explored in Indian literature, built around a solid narrative. Easy to digest with lucid writing, hard to grasp the complete depth and breadth of with a complex narrative. It leaves you with a sense of longing for story. And an attachment towards Onir. This one is hard to put down.
Read more
Report abuse
See all reviews
Back to top
Get to Know Us
Connect with Us
Make Money with Us
Let Us Help You
EnglishChoose a language for shopping.
© 1996-2021, Amazon.com, Inc. or its affiliates