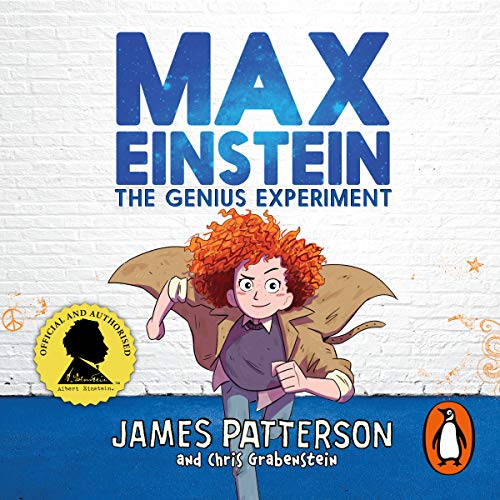 James Patterson has teamed up with the world's most famous genius to entertain and inspire a generation of children - with the first and only kids' audiobook series officially approved by the Albert Einstein Archives.

Twelve-year-old orphan Max Einstein is not your typical genius. Max hacks the computer system at NYU in order to attend college courses (even though she hates tests), builds homemade inventions to help the homeless, and plays speed chess in the park. Her not-so-normal life is crazy but predictable until...

Max is recruited by a mysterious organisation! Their mission: solve some of the world's toughest problems using science. She's helped by a diverse group of young geniuses from around the globe as they invent new ways to power the farthest reaches of the planet. But that's only if the sinister outfit known only as The Corporation doesn't get to her first....

Max Einstein is a heroine for the modern age and will be looked up to by listeners for generations to come.

PLEASE NOTE: When you purchase this title, the accompanying reference material will be available in your Library section along with the audio on our Desktop Site.

4.7 out of 5 stars
4.7 out of 5
964 global ratings
How are ratings calculated?
To calculate the overall star rating and percentage breakdown by star, we don’t use a simple average. Instead, our system considers things like how recent a review is and if the reviewer bought the item on Amazon. It also analyses reviews to verify trustworthiness.

Abhijeet Kolte
5.0 out of 5 stars Very Interesting Read !
Reviewed in India 🇮🇳 on 5 September 2020
Verified Purchase
My son just loved the book.
Read it up in a short time and now pestering me for the next one.
So very evidently, its a great read !!
Read more
One person found this helpful
Helpful
Report abuse

Rajesh v
5.0 out of 5 stars Great
Reviewed in India 🇮🇳 on 23 April 2019
Verified Purchase
Max Einstein....Good to see that optimism and over confident guy again in me through Max....Waiting for next book
Read more
One person found this helpful
Helpful
Report abuse

MariaMagdalena
2.0 out of 5 stars Kids liked it but it's poor writing
Reviewed in the United Kingdom 🇬🇧 on 21 April 2019
Verified Purchase
I bought the book to read out loud to my kids, 6 and 10, on a family holiday. They liked the book, especially my 10 year old. But I found it to be of very poor quality. Especially the second half that describes the team of kid geniuses solving the crisis in the Congo. The first half was better although the references to science laboured. But the simplification of problems and solutions in part two where just too much. My 10 year old was asking me follow up questions that I could not answer without telling him the book was overly simplistic. That aside the writing isn't great and is extremely repetetive.
Read more
One person found this helpful
Report abuse

N. D. Taylor
5.0 out of 5 stars Very good read
Reviewed in the United Kingdom 🇬🇧 on 21 November 2018
Verified Purchase
This book was great to read as it included a lot of interesting facts :) Nice to see a different style of book as supposed to james patterson's middle school books.
Read more
3 people found this helpful
Report abuse

K. J.
5.0 out of 5 stars Very happy
Reviewed in the United Kingdom 🇬🇧 on 4 October 2019
Verified Purchase
Apart from being a great read, this second hand book was in excellent condition and swiftly delivered
Read more
One person found this helpful
Report abuse

Diane 💟💞
5.0 out of 5 stars AMAZING BOOK
Reviewed in the United Kingdom 🇬🇧 on 1 July 2020
Verified Purchase
if there was i would give this book a ten out of ten
IT WAS JUST SIMPLY AMAZIND !!! i love it.
Read more
One person found this helpful
Report abuse

charlini
5.0 out of 5 stars fabulous book
Reviewed in the United Kingdom 🇬🇧 on 28 April 2019
Verified Purchase
Daughter read it in one day. Great book, as you would expect it!
Read more
Report abuse
See all reviews