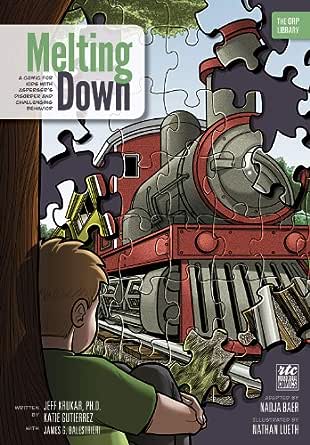 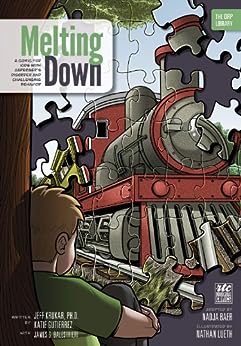 Melting Down: A Comic for Kids with Asperger's Disorder and Challenging Behavior (The ORP Library Book 2) Kindle Edition

3.8 out of 5 stars
3.8 out of 5
9 global ratings
How are ratings calculated?
To calculate the overall star rating and percentage breakdown by star, we don’t use a simple average. Instead, our system considers things like how recent a review is and if the reviewer bought the item on Amazon. It also analyses reviews to verify trustworthiness.

Spadge
5.0 out of 5 stars Five Stars
Reviewed in the United Kingdom on 12 June 2015
Verified Purchase
I love it
Read more
Report abuse

EpicFehlReader
5.0 out of 5 stars Touching way to illustrate life with Aspergers Syndrome
Reviewed in the United States on 3 May 2017
Verified Purchase
Benjamin spends his early school years struggling to make progress, not only in academics but also when it comes to social scenarios. He doesn't seem to understand the unspoken rules of the schoolyard. What is certain about Benjamin is that he does love learning! He loves all things involving history or trains, but becomes uncomfortable or even upset when asked to move away from those topics onto something else. Benjamin doesn't like interruption to his preferred daily routines and patterns and is prone to moments of intense anger, sometimes leading to physical altercations with teachers and / or students. At wit's end with the situation, his parents begin taking him to a revolving door of mental health professionals (not to mention the mountain of trial medications!), one doctor finally pinpointing Benjamin's behavior as Asperger's Syndrome. Through the doctor's recommendation, Benjamin is enrolled in Genesee Lake School, a school for students with special needs.

There, Benjamin learns proper coping skills on how to manage his feelings of anger and stress in a healthy manner, how to grade his moments of anxiety on a scale of 1 to 5 and take action accordingly, even how to do home skills such as cooking and laundry. The staff at Genesee teach Benjamin that he is not broken, he just requires a different approach to things in life. He is incredibly talented, he only needs to funnel that energy toward productive goals. Benjamin finds comfort in the new found order in his life. With the skills he learns at Genesee, he is able to finish school, take a job as a library aide, and even joins a tae kwon do class.

Genesee Lake School is a real place in Wisconsin. The school not only provides education for autistic students, but also those with mood / anxiety disorders or victims of trauma. Dr. Jeff Krukar, one of the co-authors of this graphic novel, is Genesee's resident psychologist. He helps develop books for the ORP Library, a catalog of works that offer resource books for parents and teachers of students with mental disorders. The adult works are accompanied by graphic novels that can be provided to the students themselves, the idea being that between the two a dialogue between adults and children with said disorders might be more successfully reached. Melting Down is only one of many titles within the ORP Library.

In simple, straightforward text and imagery, Melting Down gives children and adults alike a clear impression of what some of the often misdiagnosed or unaddressed challenges of Asperger's Syndrome are. The colorful artwork by Nathan Lueth keeps the reader's eyes entertained while also sucking you into the challenging life of Benjamin, a good kid who just wants to understand why life feels so hard.

I much enjoyed experiencing the graphic novel portion of Melting Down and look forward to delving into its nonfiction companion book. In fact, I am most curious to get into the other titles within the ORP library which look at not only autism but also conditions / topics such as bullying, bipolar disorder, children with PTSD, and even the conflicting emotions that can come with being an adopted child.
Read more
One person found this helpful
Report abuse

Amazon Customer
3.0 out of 5 stars Well Made, but would frighten many kids
Reviewed in the United States on 17 August 2019
Verified Purchase
The artwork and story are good, but this would terrify my child. The ASD main character must leave his home for a time to go to a group setting because his behaviors are extreme. It is probably a very realistic view for this subset of ASD families, but if my child read it, she would be terrified that she would be sent away someday. Preview before giving it to a child to read.
Read more
One person found this helpful
Report abuse
See all reviews
click to open popover
Back to top
Get to Know Us
Connect with Us
Make Money with Us
Let Us Help You
EnglishChoose a language for shopping.
© 1996-2021, Amazon.com, Inc. or its affiliates