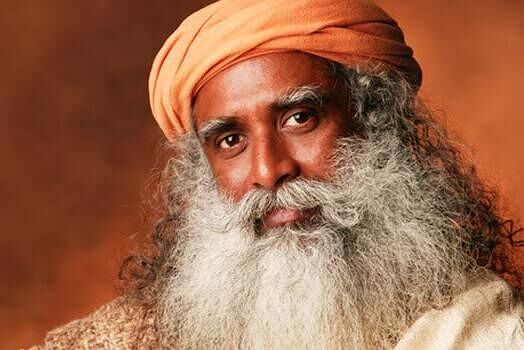 by Sadhguru (Author)
4.5 out of 5 stars 2,345 ratings
See all formats and editions
Sorry, there was a problem loading this page. Try again.
FREE delivery: Saturday, Oct 30 on first order.

Bank Offer (11): 10% Instant Discount up to INR 1500 on ICICI Bank Credit Card Transactions. Minimum purchase of INR 5000 See All
Cashback (2): Get extra ₹200 cashback as Amazon Pay balance on min purchase of ₹2,000. Valid on all prepaid orders of books, toys, video games, software, grooming & healthcare devices. This is in addition to 10% discount on HDFC bank. See All
No Cost EMI: Avail No Cost EMI on select cards for orders above ₹3000 Details
Partner Offers: Get GST invoice and save up to 28% on business purchases. Sign up for free Details
See 2 more
Pay on Delivery
10 Days Replacement Only
Amazon Delivered
No-Contact Delivery
What is Pay on Delivery (Cash/Card)?
Pay on Delivery (Cash/Card) payment method includes Cash on Delivery (COD) as well as Debit card / Credit card / Net banking payments at your doorstep.
Amazon Delivered
Amazon directly manages delivery for this product. Order delivery tracking to your doorstep is available.
No-Contact Delivery

Sadhguru is a yogi and profound mystic of our times. An absolute clarity of perception places him in a unique space in not only matters spiritual but in business, environmental and international affairs and opens a new door on all that he touches.
Start reading Mind is your Business and Body the Greatest Gadget on your Kindle in under a minute.

4.5 out of 5 stars
4.5 out of 5
2,345 global ratings
How are ratings calculated?
To calculate the overall star rating and percentage breakdown by star, we don’t use a simple average. Instead, our system considers things like how recent a review is and if the reviewer bought the item on Amazon. It also analyses reviews to verify trustworthiness.

Amazon Customer
4.0 out of 5 stars Worth a read.
Reviewed in India on 15 March 2017
Verified Purchase
Especially for someone looking for a different perspective on a situation.
" One can not solve the problem with the same thinking one used while creating it. "
Read more
37 people found this helpful
Helpful
Report abuse

Aishwarya Nair
5.0 out of 5 stars Amazing perspective!!
Reviewed in India on 20 August 2018
Verified Purchase
I would definitely recommend reading this book not just once but over and over again for better understanding each time. The insights given here are amazing and yes I cannot guarantee what this book will bring to each one of us, but for me it provided a methodology that I could imply and see to bring peace and joy specially when time is rough!
Read more
10 people found this helpful
Helpful
Report abuse

Amazon Customer
5.0 out of 5 stars Fantabulous..Great & Inspiring
Reviewed in India on 7 April 2017
Verified Purchase
Very much related to current scenarios of our life & Fabulous articulation by Sadhguru in a unique & simplestic way.
Should be read by every person who needs the direction towards wellbeing.
Read more
39 people found this helpful
Helpful
Report abuse

Gautam Sharma
4.0 out of 5 stars Must for youths
Reviewed in India on 8 February 2019
Verified Purchase
Well it's a 2 in 1 book.. I have read it on Kindle it's a pretty good book for understanding our mind and it's working...
Read more

4.0 out of 5 stars Must for youths
By Gautam Sharma on 8 February 2019
Well it's a 2 in 1 book.. I have read it on Kindle it's a pretty good book for understanding our mind and it's working...
Images in this review

Ravi
5.0 out of 5 stars Amazing read.
Reviewed in India on 13 February 2017
Verified Purchase
This book tries to solve some of the unsolved dimensions of self and its interplay with body and mind. Clarity it brings is awesome.
Read more
12 people found this helpful
Helpful
Report abuse

Kindle Customer
5.0 out of 5 stars Great book
Reviewed in India on 22 March 2018
Verified Purchase
I am reading yhis book after reading Inner engineering and found that most of the ideas are almost same as that of inner enginnering book..but overall great book to read
Read more
12 people found this helpful
Helpful
Report abuse

5.0 out of 5 stars Nice
By Kaushalendra on 18 July 2019
Nice book...nice quality of papers
Images in this review

Pradnya
3.0 out of 5 stars a good read but not a must read
Reviewed in India on 1 November 2018
Verified Purchase
Sadhguru in today's time has become a star icon but whatever he says in this book has already been said and written by many people before him so nothing new as such. the language of the book is lucid and so anybody can understand what he is saying. he is talking about yogic science and philosophy in this book in brief but there are better books on this topic than this one.
Read more
6 people found this helpful
Helpful
Report abuse
See all reviews

christine meier
5.0 out of 5 stars Accessible wisdom from a true Sage and MYSTIC
Reviewed in the United Kingdom on 13 September 2018
Verified Purchase
Sadhguru today is known at an international level, where in every area of life he is able to render accessible the most profound knowledge and intuitions. Although he generously downloads all his interviews and material on youtube and on his site, it is worthwhile buying his books. Not only to contribute to ISHA, his organisation of volunteers but in order to be able to read and re-read his books which take his genius to a more profound level.
Read more
11 people found this helpful
Report abuse

Pranab Maji
5.0 out of 5 stars Excellent Book
Reviewed in the United Kingdom on 11 January 2021
Verified Purchase
It is an outstanding book to bring changes in life. Its thought process is reflected in our real world.
Read more
2 people found this helpful
Report abuse

Amazon Customer
5.0 out of 5 stars Recommend
Reviewed in the United Kingdom on 27 August 2019
Verified Purchase
Must read. Sadhguru has always something relevant and valuable to say.
Read more
4 people found this helpful
Report abuse

cinnabon19
5.0 out of 5 stars Sadhguru is unique
Reviewed in the United Kingdom on 28 December 2020
Verified Purchase
Perfect for open minds.
He is the best.

Alison Watson
5.0 out of 5 stars Excellent
Reviewed in the United Kingdom on 6 October 2018
Verified Purchase
Sadhguru needs no words. Excellent read .
Read more
3 people found this helpful
Report abuse
See all reviews
Back to top
Get to Know Us
Connect with Us
Make Money with Us
Let Us Help You
EnglishChoose a language for shopping.
© 1996-2021, Amazon.com, Inc. or its affiliates