The Monk Who Became Chief Minister and over 2 million other books are available for Amazon Kindle . Learn more
Share <Embed> 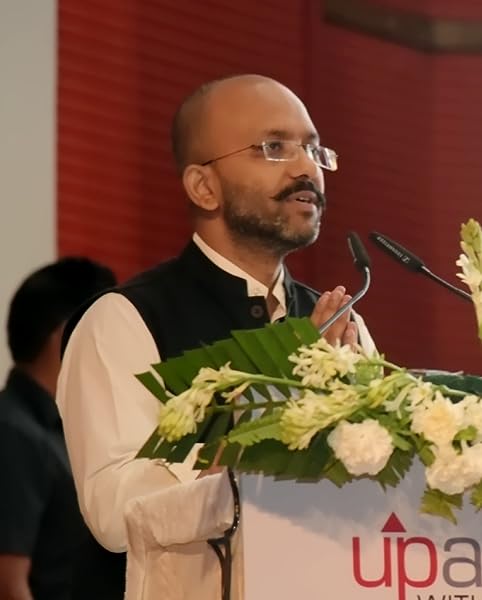 First definitive biography of a monk who has become the chief minister of the most populous state of India.
It captures the journey of a shy and introvert boy from the hills of Uttarakhand who has now become a man of consensus.

Shantanu Gupta is the founder of a leading youth based organisation, Yuva Foundation, which works with youth and spreads awareness among them, on policy, politics and social issues. In the past he has worked for a renowned think tank, Center for Civil Society (CCS). Shantanu has worked long in the hinterlands of Bundelkhand with UNICEF in Uttar Pradesh. He has also lead large-scale remedial education interventions with Naandi Foundation in Andhra Pradesh, Maharashtra and New Delhi. Shantanu has worked for a decade as a process and management consultant in many cities in India, Switzerland, Cyprus, Hungry and Israel. He has represented India in many international conferences on economy and policy, in Germany, Malaysia and Srilanka.

On 19 march 2017, Yogi Adityanath took an oath as the twenty first chief minister of Uttar Pradesh. You may know a few things about him, you may have seen some media coverage and might have read some stories; some biased, some exaggerated and some real. But there is much more that makes Yogi Adityanath.

This biography takes you through four facets of Yogi Adityanath’s life in its four sections. The book starts with Yogi’s current avatar, as chief minister of Uttar Pradesh, electoral politics of 2017 Uttar Pradesh assembly elections, dynamics behind Yogi’s selection as the CM of UP and initial days of Yogi at the Pancham Tal (CM office of UP). The second section takes you through the life of this long standing, five time parliamentarian Yogi Adityanath, his electoral victories, his meticulous interventions in parliament, the truth behind his so-called controversial speeches, the rationale behind his idea of love-jihad, re-conversion, Hindu Yuva Vahini and his relationship with the BJP. In the third section I take my readers through the life of Mahant of Gorakhnath mutt, Yogi Adityanath, his rigorous yogic routine, about gurus of Nath Panth, and socio-political activities of the mutt over the decades. In last section I will leave my readers with some very engaging first-hand accounts of the upbringing of a young boy Ajay Singh Bisht, in the hinterlands of Uttarakhand, who grew up among cows, farms, mountains and rivers to later become a Mahant, a Parliamentarian and the chief minister.

Through extensive research I have accumulated unseen pictures, unheard instances, first-time interviews, with people close to Yogi, in this biography. The book takes you through the journey of a shy and introvert boy from the hills of Uttarakhand, who had a modern education in the faculties of science from Kotdwar, later took sanyas and went through rigorous training in vedic education. From being a rebel politician inside and outside the party, he now has become a man of consensus. This book explores how a Nath Panthi monk, learnt the nuances of politics from his guru, Mahant Awaidnath, and rose to take the highest position in Uttar Pradesh’s politics. A state with 22 crore people and 80 Lok Sabha seats, is one of the very crucial political pieces in India’s electoral puzzle. With a history of producing many prime ministers for the country, the State has given yet another prospect for the prime minister’s office, in the post-Modi era in the form of Yogi Adityanath. You have in your hands the first definitive biography of a monk who has become the chief minister of the most populous state of India.

While writing this biography, I spent time in Gorakhnath Mutt, learning about Nath Panth, originating from Mahayogi Adinath Lord Shiva, learning how Guru Matsyendranātha, and Guru Goraksanātha structured the teachings of Nath Panth, I also discovered the various rituals and symbols of nath panth, the tenants of Hath Yoga and, it gave me goose bumps to realize that I am standing on such hallowed grounds. A place where once, Guru Goraksanātha practiced and taught yoga, where hundreds of Nath Panth yogis gathered on various auspicious occasions, where in modern times ‘Ram Janmbhoomi’ movement deliberations were conducted, a Mutt which was always socially and politically active and its mahants represented the region in state assembly and national parliament and the Mutt which gave a Nath Panthi yogi, a kanphata sadhu as the twenty first chief minister of Uttar Pradesh. I feel this state is blessed to have a descendent and disciple of Adinath Lord Shiva, to serve its 22 crore people and I am also equally blessed to be able to bring the story of this monk to my readers.

Start reading The Monk Who Became Chief Minister on your Kindle in under a minute.

4.0 out of 5 stars
4 out of 5
130 global ratings
How are ratings calculated?
To calculate the overall star rating and percentage breakdown by star, we don’t use a simple average. Instead, our system considers things like how recent a review is and if the reviewer bought the item on Amazon. It also analyses reviews to verify trustworthiness.

Stamewo
1.0 out of 5 stars It is full of youtube video transcripts.
Reviewed in India on 30 March 2019
Verified Purchase
I wasted 150 bucks on kindle version of this book to read what -
What i already know.
Worst kind of writing i ever saw.
The book is written for the sake of writing and finishing some sort of word deadline.
Badly edited and badly formatted.
Same data and information repeated again and again.
Can you believe there are pages and pages of yogi's speeches from parliament, his farewell speech and the most funny thing is thst the author just filled pages with yogi's new channel interviews which is freely available on youtube.
This book is waste of money and time.
The writer is simple looting its readers with lazy writing.

Nabeel Bhattacharya
3.0 out of 5 stars Watch the video by author on a YouTube channel of 9 mins called festival of bharat.
Reviewed in India on 28 February 2019
Verified Purchase
The entire book can be avoided by seeing the video by the author (9 min) on YouTube channel festival of Bharat. Don't buy and everything of value can be taken out from that video only
Read more
20 people found this helpful
Helpful
Comment Report abuse

Pratik Bora
3.0 out of 5 stars Not bad ! Could have been better.
Reviewed in India on 4 February 2018
Verified Purchase
Anyone having zero idea about Yogi can find this book very interesting.
For someone like me who keeps a close track of his activities will find nothing new.
I can say the author could have given more information about Yogi as a person and narrated some incidents that are not out in public domain and only his close one knows.
One interesting part of the book is the information about the nath panth and all the history behind it.
Anyway UP is in safe hands.
All and all a good try.
Read more
13 people found this helpful
Helpful
Comment Report abuse

Amanpreet Singh
5.0 out of 5 stars Very nice book.
Reviewed in India on 7 December 2019
Verified Purchase
It is a very nice book. I am not saying from the point of view of the riteousness of the content. I don't know whether it is right or wrong. I am saying from the point of view of intelligibility. The book is written in a simple language, very easy to grasp the content. Whatever is delivered by the author can be easily grasped by the readers. Obviously, we learn a lot about C.M. Yogi ji. How he came into power? What were the real intentions of yogi ji behind his acts and how his even good acts were tried to turn into bad acts by some bad people.
Read more
6 people found this helpful
Helpful
Comment Report abuse

V.C.Venkatesh
3.0 out of 5 stars Not worth wasting money. Just read Wikipedia about Yogi Adityanath
Reviewed in India on 3 March 2020
Verified Purchase
Absolutely useless book. It's a collection of news paper bytes, YouTube video sound bytes and miscellaneous sources. Some places I found glaring grammar mistakes which even a high school kid will not make.
I bought it because it was Yogi Adityanath, I was supposed to be reading about, who I admire. Turned out to be a disappointing book.
Read more
4 people found this helpful
Helpful
Comment Report abuse

Ramana Rajgopaul
5.0 out of 5 stars A great read.
Reviewed in India on 19 June 2019
Verified Purchase
It is a remarkable write up regarding the truth about a much maligned man. A very satisfying read.
Read more
4 people found this helpful
Helpful
Comment Report abuse

Vikas Singh
5.0 out of 5 stars Excellent first edition
Reviewed in India on 6 September 2017
Verified Purchase
Excellent book. Good to see that a lot of primary research was done on Yogi's life so far and book was not just based on available material.

Burn to death ISIS
5.0 out of 5 stars Five Stars
Reviewed in the United States on 17 January 2018
Verified Purchase
best book on yogi adityanath
Read more
3 people found this helpful
Report abuse
See all reviews
Pages with related products. See and discover other items: books in english for children
Unlimited FREE fast delivery, video streaming & more
Prime members enjoy unlimited free, fast delivery on eligible items, video streaming, ad-free music, exclusive access to deals & more.
> Get started
Back to top
Get to Know Us
Connect with Us
Make Money with Us
Let Us Help You
EnglishChoose a language for shopping.
© 1996-2020, Amazon.com, Inc. or its affiliates