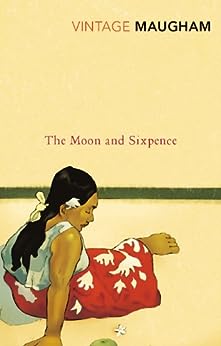 I picked it up and couldn't put it down. -- Alexander McCall Smith ― Mail on Sunday

From an era that produced George Bernard Shaw, H.G. Wells and John Galsworthy, Maugham is the great survivor ― Economist

If anyone deserves resuscitation, he does... As a teenager, I read and reread my sister's long shelf of Maughams. What I enjoyed was their atmosphere: the brooding, sensual, sinister mood of exotic locations, where his characters seemed always on the verge of mania and where no-one behaved nearly so well as they were expected to -- Rosemary Goring ― Herald --This text refers to the paperback edition.

Charles Strickland, a conventional stockbroker, abandons his wife and children for Paris and Tahiti, to live his life as a painter. Whilst his betrayal of family, duty and honour gives him the freedom to achieve greatness, his decision leads to an obsession which carries severe implications. Inspired by the life of Paul Gauguin, The Moon and Sixpence is at once a satiric caricature of Edwardian conventions and a vivid portrayal of the mentality of a genius. --This text refers to the paperback edition.

William Somerset Maugham, famous as novelist, playwright and short-story writer, was born in 1874, and lived in Paris until he was ten. He was educated at King's School, Canterbury, and at Heidelberg University. He spent some time at St. Thomas' Hospital with a view to practising medicine, but the success of his first novel, Liza of Lambeth, published in 1897, won him over to letters. Of Human Bondage, the first of his masterpieces, came out in 1915, and with the publication in 1919 of The Moon and Sixpence his reputation as a novelist was established. His position as a successful playwright was being consolidated at the same time. His first play, A Man of Honour, was followed by a series of successes just before and after World War I, and his career in the theatre did not end until 1933 with Sheppey.

His fame as a short story writer began with The Trembling of a Leaf, subtitled Little Stories of the South Sea Islands, in 1921, after which he published more than ten collections. His other works include travel books such as On a Chinese Screen, and Don Fernando, essays, criticism, and the autobiographical The Summing Up and A Writer's Notebook.

Stunningly rejacketed as part of a major reinvigoration of this neglected 20th century master --This text refers to an alternate kindle_edition edition.
Read more

4.5 out of 5 stars
4.5 out of 5
148 global ratings
How are ratings calculated?
To calculate the overall star rating and percentage breakdown by star, we don’t use a simple average. Instead, our system considers things like how recent a review is and if the reviewer bought the item on Amazon. It also analyses reviews to verify trustworthiness.
Top reviews

aditya sharma
5.0 out of 5 stars Good.
Reviewed in India on 25 December 2018
Verified Purchase
If you are searching for a kind of an epiphany, then this book is just for you. This monotonous life bores everyone of us and if you need some encouragement to jump out of your small space, do read this book. Paul Gauguin acts as an inspiration for all of those who stifled their passions for something normal in life and now want out of that situation. Mentality of a genius is vividly and colorfully painted.
Read more
One person found this helpful
Helpful
Report abuse

earnestdiscourse
5.0 out of 5 stars Just like Of Human Bondage
Reviewed in India on 22 July 2015
Verified Purchase
Just like Of Human Bondage, this too is a work of art capable of leaving its imprint on one's mind. The story of an artist in all his glorious follies. Don't think twice before getting a copy, as you seldom know how great a work could be until you see your own image in that of the protagonist. A well crafted tale from the ingenious mind of Maugham.
Read more
Helpful
Report abuse

saranya
3.0 out of 5 stars masterpiece by W. S. Maugham
Reviewed in India on 24 May 2016
Verified Purchase
The novel was really a masterpiece. It makes the readers to think about the reality of the world.
Read more
Helpful
Report abuse

Diby
5.0 out of 5 stars Brilliant
Reviewed in India on 7 October 2017
Verified Purchase
It's never late to start doing what you want to do in life. This story is all about pursuing your passion till the end of your life. A must read.
Read more
Helpful
Report abuse

Joey Dean
5.0 out of 5 stars His Finest Novel
Reviewed in the United Kingdom on 30 October 2020
Verified Purchase
I have been reading all of Somerset Maugham's novels and short stories in lockdown, and what a superb writer he was. This is my favourite of all his books. I know it is supposed to be based on the life of Paul Gaugin but I found this to be a considerable overstatement. I think the main character has the sort of self-centred manic drive and narrow focus that many great artists and writers share, but I would say Maugham wrote the novel with Gaugin at the back, rather than to the fore, of his mind. As with all Maugham's writing, the main themes are class , materialism, love and obsession, and the search for a deeper meaning in life.
Read more
Report abuse

Samuel Barber
4.0 out of 5 stars The Despicable Charles Strickland
Reviewed in the United Kingdom on 21 July 2014
Verified Purchase
This is a really good book, not because of the protagonist or the story, but because of the writing of the character, Blanche Stroeve. She really saves this book from being relegated to the dustbin. In her, you see how a supposedly happily married woman can leave her husband and end up with a despicable character like George Strickland. Her journey from being married to Dirk Stroeve to being with George is well-written. She's the only sympathetic character in the whole story, but in some ways she is an echo of Strickland who left his wife and children. Somerset Maugham should have taken this opportunity to expand the relationship between Strickland and Blanche. What did he say to her that won her over? At what point did she go from hating him to loving him? It is clear that her initial hatred of him was really a suppression of her alarming love for him, and she protests to her husband, Dirk, not to let Strickland into the house because she knows that she couldn't resist falling in love with him. This is understandable because there are some women who are aggressive and argumentative towards some men, but it is really a lopsided expression of affection. This should have been expanded more because it would give us some insights as to Strickland's journey towards leaving his wife and children. Blanche's fatal end is a foreshadowing of Strickland's fatal end.
Read more
One person found this helpful
Report abuse

S.M. Johnson
5.0 out of 5 stars Nasty person: stunning work
Reviewed in the United Kingdom on 9 August 2014
Verified Purchase
No this was not in my ten book bundle. I bought it separately. One of Maugham's best appreciated books, and rightly so. The theme is the characterisation of Charles Strickland, supposedly based on the life of Paul Gauguin. Very loosely, I would say. Really I think what fascinates Maugham here is the sort of personality and life style that goes with a huge uncompromising talent. Genius. Strickland lives a rather boring pedestrian life in London, but knows he has to be a painter. He goes to classes and then takes himself through some excruciating situations to be able to do his totally original work which cannot be understood by the people around him. After his death his genius is recognised and his work sells for telephone numbers This type of life has applied to several artists. But this it is fiction. It is Maugham, therefore it is brilliantly executed and also believable although Strickland's personality is that of someone who is quite horrible.
Read more
One person found this helpful
Report abuse

reader 451
5.0 out of 5 stars Obsessive
Reviewed in the United Kingdom on 4 July 2008
Verified Purchase
Painting, even if it uses codes, is the art of showing, whereas the writer, limited to words, can only proceed by allusion, by tickling images from the minds of his public. This was the challenge in Maugham's novel-length portrait of the cursed painter, loosely based on Gauguin's life. The result is a powerful and haunting depiction, as directly powerful as any painting.

The story follows the downward spiral of Charles Strickland from the moment he decides to leave his stockbroking job and conventional English family, or rather his upward spiral, towards artistic zenith. The victims fall one after the other around him as he sacrifices everything to painting, not just wealth and security, but all regard for fellow humans and decency physical and moral. Yet this is no stereotype of the crazed genius. Strickland is coldly conscious of his choices, pragmatic in his idolatry, clear-eyed in his determination on a ride to hell; this is what makes The Moon and Sixpence so convincing and so creepily fascinating.

Maugham avoids delving into the unknowable reasons for his protagonist's change of life. Neither does he waste time in ponderous commentary on painting or the nature of genius. At the same time, the narrator's tale, with its inevitable hearsay and conjecture, contrasts the ambiguity of storytelling with the absolutes of pictorial art. But this is essentially a white-knuckle ride from London to Paris, on to the dodgier suburbs of Marseille, and destruction in the Tahitian jungle. Almost as obsessive as Strickland's own passion.


Read more
One person found this helpful
Report abuse
See all reviews
Back to top
Get to Know Us
Connect with Us
Make Money with Us
Let Us Help You
EnglishChoose a language for shopping.
© 1996-2021, Amazon.com, Inc. or its affiliates