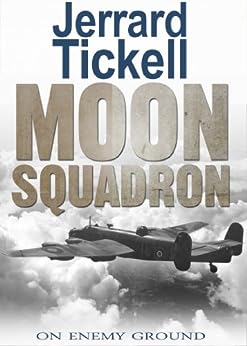 4.0 out of 5 stars
4 out of 5
32 global ratings
How are ratings calculated?
To calculate the overall star rating and percentage breakdown by star, we don’t use a simple average. Instead, our system considers things like how recent a review is and if the reviewer bought the item on Amazon. It also analyses reviews to verify trustworthiness.
Top reviews

HuddyBolly
3.0 out of 5 stars Still, in 1956, it can't be told
Reviewed in the United Kingdom on 19 June 2018
Verified Purchase
Moon Squadron was originally published in 1956, and it shows.
Written in the 'deering do' style of prose that was so popular in those days, it could have come straight from the pages of the 'Rover' boys' story comic which featured, 'I flew with Braddock'; and the frankly unbelievable exploits of it's fictional RAF superhero Sergeant Matt Braddock V.C. and Bar.
One reviewer has described the story as semi fictional, presumably because, in common with so much that was written during this period of awakening public interest in 'the war', much was still covered by the ubiquitous Official Secrets Act; a case of , 'still it can't be told!
The author's lively imagination makes up for that though in no small measure.
RAF Tempsford, from which much of the action took place is well described, but in general, names are not named; the agents being referred throughout as 'Joes', and the aircrew's exploits are dealt with in a general manner. To those versed in the subject of SOE a number of the agents are recognisable, but it stops there.
This is unfortunate as the exploits referred to were truly exceptional in many cases, but here they seem to be treated as jolly japes.
And when not confounding the dastardly Hun, references to our heroes meeting popsies for dinner at this or that expensive London hostelry are sprinkled throughout the story.
Truly, a war story 1956 style.
Read more
4 people found this helpful
Report abuse

Rob Kemp
5.0 out of 5 stars brave beyond words
Reviewed in the United Kingdom on 12 March 2015
Verified Purchase
I was hooked from start to finish. Little aware was I of these secret missions and the intense bravery of all those involved.
May the legend of the Moon Squadrons live on forever.
Read more
5 people found this helpful
Report abuse

leslie meech
4.0 out of 5 stars Spy transport
Reviewed in the United Kingdom on 30 January 2014
Verified Purchase
As I am interested in World War 2 history.I chose this book thinking I would be reading about aircrews and bombing mission's.It's not that at all.I will not say what it was about but I felt it a refreshing change to what I would usually read.
Read more
3 people found this helpful
Report abuse

nyamandhlovu
4.0 out of 5 stars Four Stars
Reviewed in the United Kingdom on 5 May 2018
Verified Purchase
Very interesting but a bit one sided
Read more
Report abuse

Richard J. Dewe
5.0 out of 5 stars Five Stars
Reviewed in the United Kingdom on 12 June 2018
Verified Purchase
good
Read more
Report abuse
See all reviews
Back to top
Get to Know Us
Connect with Us
Make Money with Us
Let Us Help You
EnglishChoose a language for shopping.
© 1996-2021, Amazon.com, Inc. or its affiliates