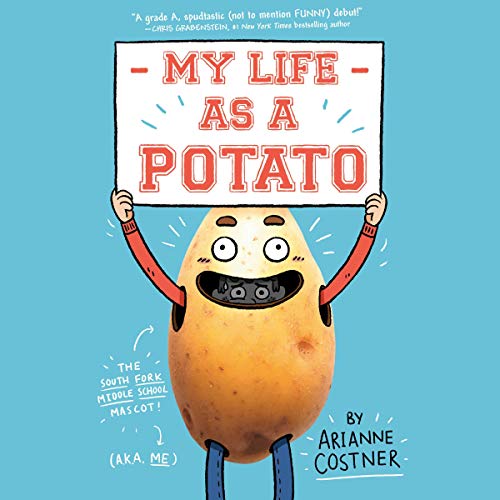 My Life as a Potato

For anyone who has ever felt like a potato in middle school, this hilarious story about a boy forced to become the dorkiest school mascot ever will have listeners cheering!

Ben Hardy believes he's cursed by potatoes. And now he's moved to Idaho, where the school's mascot is Steve the Spud! Yeah, this cannot be good.

After accidentally causing the mascot to sprain an ankle, Ben is sentenced to Spud duty for the final basketball games of the year. But if the other kids know he's the Spud, his plans for popularity are likely to be a big dud! Ben doesn't want to let the team down, so he lies to his friends to keep it a secret. No one will know it's him under the potato suit...right?

Life as a potato is all about not getting mashed!

"A hilarious, relatable story for any kid who has ever felt out of place." (Stacy McAnulty, author of The Miscalculations of Lightning Girl)

4.8 out of 5 stars
4.8 out of 5
70 global ratings
How are ratings calculated?
To calculate the overall star rating and percentage breakdown by star, we don’t use a simple average. Instead, our system considers things like how recent a review is and if the reviewer bought the item on Amazon. It also analyses reviews to verify trustworthiness.
Top reviews

Peach Family
5.0 out of 5 stars This deserves a Newbery for comedy
Reviewed in the United States on 2 April 2020
Verified Purchase
If there was an ALA award just for comedy, MY LIFE AS A POTATO would earn that gold sticker this year. This book is SO FUNNY. Multiple times while reading it I laughed to the point of tears, and other people around me came over to ask what could possibly inspire so many giggles. MY LIFE AS A POTATO, that's what!

I will be recommending this one to everyone I know, especially kids—they deserve high-quality, well-written, humorous books like this one.

Arianne Costner is an incredibly talented writer, and I eagerly look forward to her next book!
Read more
5 people found this helpful
Report abuse

Catherine A. Hamilton, author of Victoria's War
5.0 out of 5 stars You won’t want to miss Ben’s hilarious middle-school adventure.
Reviewed in the United States on 8 September 2020
Verified Purchase
My Life As A Potato – By Arianne Costner
Genre — Middle-grade fiction

According to the dustjacket of this darling book, the author “believes that writers should crack up at their own jokes.”

I’m here to tell you that my husband and I laugh more reading this book than we’ve laughed in a long time! We read it on a roadtrip through Idaho, which made it all the better, (being that we were actually IN the potato state!) Protagonist Ben lives in Idaho, only because his parents moved him there from lovely California to Idaho.

You won’t want to miss Ben’s hilarious middle-school adventure. I highly recommend this book to anyone who loves to laugh! I’m buying it for my middle school grandson for his birthday!
Read more
One person found this helpful
Report abuse

Cori Vella
5.0 out of 5 stars Spud-tacular!
Reviewed in the United States on 9 April 2020
Verified Purchase
MY LIFE AS A POTATO is hilarious, relatable, and full of heart. 7th grader Ben Hardy is trying to reinvent himself as a cool kid after a move from California to Idaho--but his new identity is threatened when he's forced to step in as the school's dorky potato mascot. Will he keep up with the popular crowd or embrace who he truly is?

Full of potato puns and #relatable middle school feels, this book had me snort-laughing all the way through. Ben's struggle is perennial and universal, and the author, Arianne Costner, channels middle school realness with ease. Perfect for kids grappling with questions of identity--or just plain wanting to have a good time!
Read more
3 people found this helpful
Report abuse

Kristen E.
5.0 out of 5 stars So fun!
Reviewed in the United States on 28 March 2020
Verified Purchase
My Life As A Potato was such a cute and fun read! There were multiple LOL moments that literally had me laughing out loud, as well as some surprisingly heart-warming scenes. Perfect for any middle schooler (or really any age!) looking for something fun and light hearted but with great messages about friendship and staying true to yourself. It was fast paced enough that it kept me reading until I’d finished it a day after getting it in the mail, and left me hoping for a sequel!
Read more
2 people found this helpful
Report abuse

L. Buckner
5.0 out of 5 stars One of the Best Children's Chapter Books of 2020
Reviewed in the United States on 13 August 2020
Verified Purchase
As an educator, I highly recommend this book. Ben, the main chracter, has a hard time fitting in at his new school. He unexpectedly gets into trouble at school and his punishment is to become the school's mascot, SPUD. Ben tries to keep it a secret because if others found out, it would only make finding friends even harder. All the throughout the book, Ben encounters obstacles but tries his best to keep it a secret.

This books is an excellent mix of humor, suspense, mixed with a captivating plot. My students and I loved this book. They were begging me to read aloud everyday. As a teacher, nothing is better than the excitement of children begging for the next chapter. This book is a great read aloud and a fantastic source of literature filled with figurative language.
Read more
One person found this helpful
Report abuse
See all reviews
Back to top
Get to Know Us
Connect with Us
Make Money with Us
Let Us Help You
EnglishChoose a language for shopping.
© 1996-2022, Amazon.com, Inc. or its affiliates