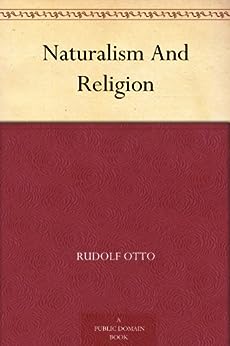 by Rudolf Otto (Author) Format: Kindle Edition
See all formats and editions
Sorry, there was a problem loading this page. Try again.
This book was converted from its physical edition to the digital format by a community of volunteers. You may find it for free on the web. Purchase of the Kindle edition includes wireless delivery.
Read more
Previous page
Next page

Rudolf Otto (September 25, 1869 March 6, 1937) was an eminent German Lutheran theologian and scholar of comparative religion. --This text refers to an alternate kindle_edition edition.

4.4 out of 5 stars
4.4 out of 5
14 global ratings
How are ratings calculated?
To calculate the overall star rating and percentage breakdown by star, we don’t use a simple average. Instead, our system considers things like how recent a review is and if the reviewer bought the item on Amazon. It also analyses reviews to verify trustworthiness.

Arjen van der Wal
3.0 out of 5 stars Interesting, but...
Reviewed in Canada 🇨🇦 on 19 April 2019
Verified Purchase
Regarding this kindle edition:
Translation by J. Arthur Thomson and Margaret R. Thomson
Editor/ Introduction: Rev. W.D. Morrison
Publishers: Williams and Norgate Ltd., 1907
The work was originally published in German in 1904.
There is no information given about the publisher of this kindle version, other than the phrase on the cover: “A public domain book”.

There is a one way live Table of Contents. You can go to the chapter, but then you can’t go back. The footnotes though, do allow you to return to your original position).

This is a very in depth recounting of contemporary debates regarding evolution and conflicting ways of interpreting the world, the religious and the scientific.

Otto starts out by contrasting the naturalistic and religious interpretations of the world, to define the relations that exist between the two, the contradictions, and the possibility of harmonizing the two. We should be able to give to natural science and to religion what is due to each. His reference to religion as religious feeling captures part of what Otto is expressing. That there is another element involved that is not suited to analysis by natural science.

The first few chapters are very well written and define naturalism (Otto defines two kinds of naturalism: one, a deification of nature that is almost animistic, and the other represented by natural science). It is the latter that he primarily deals with here.

Once Otto starts getting into arguments about natural science and more specifically about the theories of evolution and descent (which he distinguished from each other) the book gets weaker. A lot of what he writes here seems dated, not as relevant as it would have seemed to Otto’s intellectual contemporaries when first published. It involves a lot of intellectual controversies around the interpretation of Darwin’s theories and the challenges they posed to the religious conception of the world (not necessarily just the Christian). A lot of these controversies which may have been of great interest at the time, have since faded.

So the middle of the book really comes out seeming weaker and rather dated. Reading the first few chapters (1-4) and the last few chapters (10-12) is probably the most worthwhile way to approach the book. They are constantly articulate and I ended up highlighting many passages in my copy.

Something I noted while reading this book was the remarkable number of scientists and other writers in Germany who wrote on the matter and thought quite deeply on such things. Reading Otto’s survey of mostly German writers of his day makes you appreciate the depth of the German intellectual landscape in the late 19th and early 20th centuries. Something that seems quite astounding compared to today. That cultural change itself is of great interest, even if it’s not the point of this book and the author would not have foreseen it.

A great deal of concern is for teleology – the importance of not just causes but purposes. Darwin’s theory only looked at causes and seem to imply that there is nothing more than that, no purpose was present. Or at least no evidence for a purpose. Otto believes that teleology is a legitimate and justifiable path of inquiry.

Does a higher wisdom (God) guide this process? Does the progression towards complexity imply (or necessitate) a purpose guided by a higher power?

He also writes about the creative power of consciousness and it’s pre-eminence above the materialistic. That the world of the external and the material is not necessarily our first and most direct data, it’s derived from and only discoverable through consciousness.

All that just to get to the conclusion that it’s a mystery, deeper than our material knowledge. And religion knows this. This is all written with complete conviction.
Read more
Report abuse

1. THIS IS PHENOMENOLOGY: this is theology based on “experience”; and what we can understand from our experience with the “eternal”; that is veiled by time and space

2. THIS IS BUILDING-BLOCKS FOR 1923: this work is the prefatory work for his later manuscript: THE IDEA OF THE HOLY

3. TRAJECTORY: by examining this manuscript; we can see how Otto’s thinking progressed toward developing his later ideas; it still holds true to the 1923 phernomenology; but it is helpful to see how it all developed

4. NUMINOUS CONSCIOUSNESS: is called “EXALTATION OF HUMAN SPIRIT” in this earlier work

5. SIGNALS: the signals sent-out from numinous consciousness are specifically given in this manuscript as: PURPOSE; DEPENDENCE; & MYSTERY

6. SCHEMA: Otto also gives us the three moments of forming an authentic schema of the KINGDOM OF GOD as: APPREHENDING IDEAS; DISCOVERING UNDERLYING FORM; & FORMULATING THE CATEGORY OF NECESSITY

sam6959
4.0 out of 5 stars Worth adding it to your library!
Reviewed in the United States 🇺🇸 on 29 January 2013
Verified Purchase
Great addition to the collection of anyone who is keeping up with the "battle" between science and religion. My only problem is that the translation is not very fluent in my opinion. Some times I had to read a page twice to understand it.
Read more
9 people found this helpful
Report abuse

Davito
5.0 out of 5 stars Excellent
Reviewed in the United States 🇺🇸 on 16 July 2013
Verified Purchase
Material is reasonably priced and arrived timely; excellent condition, as described on seller page. Thank you so very very very much.
Read more
2 people found this helpful
Report abuse
See all reviews
Report an issue
Does this item contain inappropriate content?
Report
Do you believe that this item violates a copyright?
Report
Does this item contain quality or formatting issues?
Report