₹ 899.00
+ ₹ 100.00 Delivery charge
Sold by: Payal Books
Have one to sell?
Sell on Amazon
Flip to back Flip to front
Listen Playing... Paused   You're listening to a sample of the Audible audio edition.
Learn more.
See all 3 images 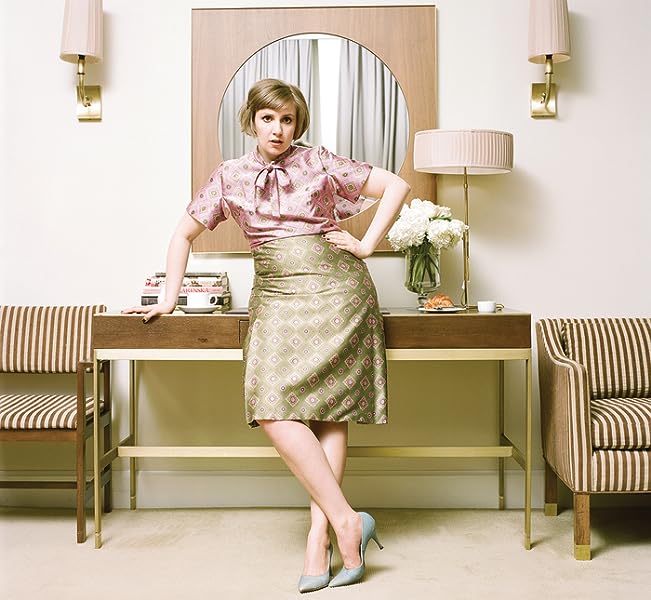 Not That Kind of Girl: A Young Woman Tells You What She’s “Learned” Hardcover – Import, 30 September 2014

‘It’s not Lena Dunham’s candour that makes me gasp. Rather, it’s her writing – which is full of surprises where you least expect them. This is a fine, subversive book’ David Sedaris

‘Always funny, sometimes wrenching, these essays are a testament to the creative wonder that is Lena Dunham’ Judy Blume

‘Dunham’s writing is just as smart, honest, sophisticated, dangerous, and charming as her work on ‘Girls’. Its essential quality is a kind of joyful super-awareness: of herself, the world, the human. Reading her makes you glad to be in the world, and glad that she’s in it with you’ George Saunders

‘Very few women have become famous for being who they actually are, nuanced and imperfect. When honesty happens, it’s usually couched in self-ridicule or self-help. Dunham doesn’t apologise like that – she simply tells her story as if it might be interesting. The result is shocking and radical because it is utterly familiar. ‘Not That Kind of Girl’ is hilarious, artful, and staggeringly intimate; I read it shivering with recognition’ Miranda July

‘Frank, fearless and funny … made me want to cry out with thanks that a talented, intelligent woman has said and done worse things than I have and is repeating them without a scrap of shame … ‘Not That Kind of Girl’ is funny, empowering and as good a millennial guide for navigating and laughing at your foggy adolescence and murky twenties as there can be. I only wish it had been around earlier’ Sunday Times

‘Very funny … and imbues the gloom with hope … “Having it all” need not mean hitting narrow markers of success – the perfect job/man/body – but instead being able to own your experiences: the good, the bad, the ugly. All of it’ Independent

At only 23 years old, Dunham wrote, directed and starred in the multi-award winning ‘Tiny Furniture’. She now stars in the HBO series, ‘Girls’, which she created and also serves as an executive producer and writer. Dunham graduated from Oberlin College in 2008 with a degree in Creative Writing and currently resides in New York City.

Start reading Not That Kind of Girl on your Kindle in under a minute.

3.9 out of 5 stars
3.9 out of 5
2,121 global ratings
How are ratings calculated?
To calculate the overall star rating and percentage breakdown by star, we don’t use a simple average. Instead, our system considers things like how recent a review is and if the reviewer bought the item on Amazon. It also analyses reviews to verify trustworthiness.

Amazon Customer
5.0 out of 5 stars Enjoyable
Reviewed in India on 28 January 2017
Verified Purchase
If you are a loudmouth, feminist with real problems and no fairy godmothers - you'll like Lena's work both in writing and on TV. She's honest, funny and direct in this novel. And it's an enjoyable and quick read.
Read more
Helpful
Report abuse

Priya
5.0 out of 5 stars Excited to read. Based on HBO series 'Girls'
Reviewed in India on 13 February 2021
Verified Purchase
Book was in very good condition. Absolutely great deal for price.
Read more

5.0 out of 5 stars Excited to read. Based on HBO series 'Girls'
By Priya on 13 February 2021
Book was in very good condition. Absolutely great deal for price.
Images in this review

Josmojo
1.0 out of 5 stars A horrible horrible book
Reviewed in India on 26 October 2015
Verified Purchase
A horrible horrible book. Just cannot understand why it has received such rave reviews. It was a Book Club choice and we all struggled with it. 10 women had to give up reading it as we were disturbed by the twisted warped mind of the author.
Read more
One person found this helpful
Helpful
Report abuse

ANKITA D.
3.0 out of 5 stars a good book
Reviewed in India on 7 March 2016
Verified Purchase
it is a nice book but gotta say this that it is a bit boring.....but I would also say that it has thought me some really important things I bought this book only because I am a big lens Dunham family so I'm like a 60%satisfied but also 40% not satisfied
Read more
Helpful
Report abuse

Aastha
1.0 out of 5 stars No.
Reviewed in India on 18 February 2016
Even if you're a huge HBO Girls/Lena Dunham fan (which I am) you would be highly disappointed by this book, it's terrible.
Read more
2 people found this helpful
Helpful
Report abuse

mshehla
5.0 out of 5 stars good standard quality
Reviewed in India on 22 January 2015
Verified Purchase
As good as buying a book at a store.
Read more
Helpful
Report abuse
See all reviews

Emma
3.0 out of 5 stars Dull
Reviewed in the United Kingdom on 27 January 2016
Verified Purchase
Pretty dull. Shame as I loved Girls Series one and Two (although I gave up on the rest of the upcoming series). Needy, self indulgent very me me me with no real concept of real life.
Read more
5 people found this helpful
Report abuse

Veebee
4.0 out of 5 stars Brilliant book
Reviewed in the United Kingdom on 4 August 2018
Verified Purchase
LOVE the book. Lena Dunham is so engaging and entertaining. As I read the book I was reminded so much of characters and situations in 'Girls', so if you enjoy the series I am certain you will love the book.
Item sold 'as new' but shouldn't have been listed like that as it has gross yellow stains on the pages inside.

4.0 out of 5 stars Brilliant book
Reviewed in the United Kingdom on 4 August 2018
LOVE the book. Lena Dunham is so engaging and entertaining. As I read the book I was reminded so much of characters and situations in 'Girls', so if you enjoy the series I am certain you will love the book.
Item sold 'as new' but shouldn't have been listed like that as it has gross yellow stains on the pages inside.

Jemma Saunders
5.0 out of 5 stars A must for any Lena Fans
Reviewed in the United Kingdom on 25 January 2018
Verified Purchase
I relate to this book on many levels, if you like the series Girls which is created by the author Lena then you will appreciate the dark humour and under tones of this book. I find myself shocked and confused in some parts which again I like! This is the reason I also like the show! It give you that uncomfortable feeling but yet captivated at the same time!
Read more
One person found this helpful
Report abuse