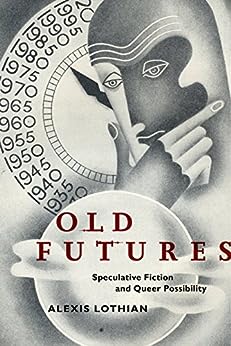 by Alexis Lothian (Author) Format: Kindle Edition
See all formats and editions
Sorry, there was a problem loading this page. Try again.

Traverses the history of imagined futures from the 1890s to the 2010s, interweaving speculative visions of gender, race, and sexuality from literature, film, and digital media

Old Futures explores the social, political, and cultural forces feminists, queer people, and people of color invoke when they dream up alternative futures as a way to imagine transforming the present. Lothian shows how queer possibilities emerge when we practice the art of speculation: of imagining things otherwise than they are and creating stories from that impulse. Queer theory offers creative ways to think about time, breaking with straight and narrow paths toward the future laid out for the reproductive family, the law-abiding citizen, and the believer in markets. Yet so far it has rarely considered the possibility that, instead of a queer present reshaping the ways we relate to past and future, the futures imagined in the past can lead us to queer the present.

Narratives of possible futures provide frameworks through which we understand our present, but the discourse of “the” future has never been a singular one. Imagined futures have often been central to the creation and maintenance of imperial domination and technological modernity; Old Futures offers a counterhistory of works that have sought—with varying degrees of success—to speculate otherwise. Examining speculative texts from the 1890s to the 2010s, from Samuel R. Delany to Sense8, Lothian considers the ways in which early feminist utopias and dystopias, Afrofuturist fiction, and queer science fiction media have insisted that the future can and must deviate from dominant narratives of global annihilation or highly restrictive hopes for redemption.

Each chapter chronicles some of the means by which the production and destruction of futures both real and imagined takes place: through eugenics, utopia, empire, fascism, dystopia, race, capitalism, femininity, masculinity, and many kinds of queerness, reproduction, and sex. Gathering stories of and by populations who have been marked as futureless or left out by dominant imaginaries, Lothian offers new insights into what we can learn from efforts to imaginatively redistribute the future.

Amassing an impressive and eclectic archive of utopian and dystopian writings under the fantastic heading of Old Futures, Alexis Lothian offers the most detailed and theoretically sophisticated account of Queer, Black, and feminist speculative fictions to date. Offering an array of futures, non-futures, un-futures, and no futures, this book shows us the precarious foundations upon which our own sense of the present sits. Lothians book is a marvel and will, I promise, never get old. -- Jack Halberstam,author of In A Queer Time and Place

Lothian's central concept of old futuresthe cast-off remains of speculations pastis both entertaining fodder and theoretically rich terrain for making queer theory new again. Theres something wonderfully bold about the books willingness to let & the future become concrete by turning to its many past versions, bringing them to light as commentary on where we are, and are not, now. -- Elizabeth Freeman,author of Time Binds: Queer Temporalities, Queer Histories

Lothian does something else entirely and opens up a new vantage point on the future by looking at it sideways, from outside its own timeline. That vantage point allows her (and us) to see the continuities, to see the way the leftover stuff of the past’s futures persists in and enlivens our present. ― Science Fiction Studies

Lothian's insistence that many speculative texts contain both liberating queer images and unsettling normative messages is one of the strongest aspects of Old Futures . . .a book that is filled with unexpected yet crucial connections. -- Melanie E.S. Kohnen, ― Transformative Works and Cultures

Through thoughtful analysis of a number of speculative stories from the last hundred years or so, Old Futures offers a solid contribution to both geek and queer studies. Lothian asks what we can learn from women, people of color, and queer-identifying people when they imagine futures for themselves free of oppression. ― The Geek Anthropologist

It would be easy for Old Futures to feel scattered, covering as it does a century’s worth of source material, three different forms of media, and theory ranging from traditional SF criticism to fan studies. Yet somehow Lothian not only pulls it off, but makes it seem effortless. ― SFRA Review

Overall, Lothian has constructed an admirable volume that I have already begun recommending to colleagues. This is her first book, and it bodes well; I look forward to seeing what Lothian does next. ― SFRA Review --This text refers to the hardcover edition.

Alexis Lothian is Assistant Professor of Women’s Studies and Core Faculty in the Design Cultures & Creativity Program at the University of Maryland, College Park. --This text refers to the hardcover edition.

4.4 out of 5 stars
4.4 out of 5
5 global ratings
How are ratings calculated?
To calculate the overall star rating and percentage breakdown by star, we don’t use a simple average. Instead, our system considers things like how recent a review is and if the reviewer bought the item on Amazon. It also analyses reviews to verify trustworthiness.

There are 0 customer reviews and 5 customer ratings.