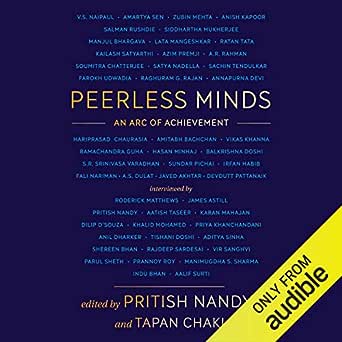 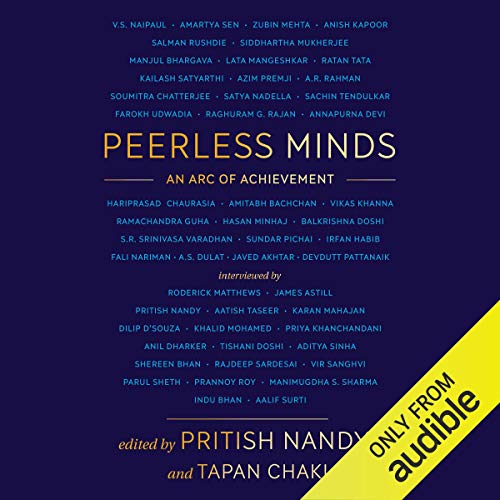 Peerless Minds: An Arc of Achievement

4.2 out of 5 stars
4.2 out of 5
9 global ratings
How are ratings calculated?
To calculate the overall star rating and percentage breakdown by star, we don’t use a simple average. Instead, our system considers things like how recent a review is and if the reviewer bought the item on Amazon. It also analyses reviews to verify trustworthiness.

Belladonnaoflavender
5.0 out of 5 stars 600 pages of achievement 🤩
Reviewed in India on 11 September 2019
🔭 I have read Pritish Nandy before. His column in TOI is rich and widely read. This book is something of the same sorts... Rich... And wide.. prize winners to more prizes.. this is a book which offers a connection.. a collection.
A discussion over a cup of tea or the pool side, twenty of the most scintillating Indian minds are put togather in this mammoth of a book. If you are wondering, no, the compilations seem non political at the most and are true to the word 'Peerless'. In a prose which flows and enriches the already enriched! And interviews which inspire. Didn't I say I was all good inspirations? And all for cherishing hard-bounds which stay? 🌻
I am so glad that @harpercollinsin decided to publish this mammoth mind of a book! This goes into my collection and I am so glad that I have this. And that I read this. Slowly, savouring. 🕸️
I just love such biographies. They teach us a lot. They leave more than the few hours we give them.

Camelia
5.0 out of 5 stars Wonderful. Absolutely worthy book to read
Reviewed in India on 22 February 2020
Absolutely a wonderful book one can have  in your collection. This book is a set of long interviews of some very eminent and greatly successful people from India.33 Interviews are there of some eminent personalities. Authors like Annapurna Devi, Toshani doshi , Salman rushdi of field prize, Nobel Peace Prize , Padma bhusan , Academy Award winners like  Manjul Bharat , VS Naipaul , Kailash Satyarthi  to CEOs of Global giants like Sundar Pichai Satya nadella , Crickets like Sachin Tendulkar ,  Two world famous  industrialists like Mr Ratan Tata , Azeem Premji who are also  greatly known  to be philanthropists have been interviewed by journalists and through these long detailed interviews we , at a glance get to  read about  the circumstances that shaped them into what they are today.I specially liked reading about Ratan Tata , Azim Premji , Manjul Bhargava and Satyarthi Kailash. Very inspiring they are ,  these interviews not only enrich our knowledge about their background and achievements but also helps us feel encouraged to do our parts as a person , feel proud of our land shaping such bright minds , go towards our dreams so we can also  play an effective role for a bright future of our world.
Read more

Simran Sharma
4.0 out of 5 stars A great investment in nonfiction
Reviewed in India on 5 November 2019
Question: Tell me your idol(s) or mentor(s) in your professional life?

Peerless Minds is an educative non-fiction comprising of interviews of "Peerless" or unequalled minds of specific professional streams. The book has 31 fantastic achievers of Indian origin who have made a mark worldwide with the skill and excellence they project in their said field of work. They talk about the inspiration, passion, struggles and journey professionally.

Intriguing facts and findings about these lovely souls are not only inspiring but also very relatable in many instances. While there's no substitute for hard work there isn't any for deference either and that's a quality of an honest achiever which reflects in every interview I've read.

It's hard for me to pick one favourite interview for the wisdom every journey entails.

Read this book if you are somebody who would like to know some amazing life lessons by these amazing minds. It is all a great choice if you are not someone who prefers memoirs this book gives you insights into 31 different lives! What more could you ask for?!

A lovely fact about this book: All editor royalties earned from this book will be donated to charity.

Gunjan Maheshwari
3.0 out of 5 stars Interviews of some of the finest minds of India
Reviewed in India on 17 October 2019
Peerless Minds: An arc of achievement is edited by Pritish Nandy and Tapan Chaki and it contains 31 interviews of some of the talented and finest minds of out times, all of them from Indian roots irrespective of where they live now.

It has ideas and philosophies by poets, singers, businessmen, CEO, actors, writers and many more other professions and it brings together different ideologies and beliefs and of course their struggle and the remarkable things they have achieved.

I like watching interviews of people whose work I have seen and someone who I admire and I really look forward to contemplate their way of thinking, how they articulate their thoughts, how quirky and witty they can be and this book did offered me some insight into the world of these renowned people but I wouldn't say that it let me help understand them on a personal level.

Some interviews were so vague and the sudden break and indifference between one question and another would just put me off and some questions were just too dumb to be even asked at the first place and I had to skimmed through some of the interviews.

But I loved interviews of Siddharth Murkherjee, Ratan Tata, Lata Mangeshkar, Hasan Minhaj, Raghuram Rajan, Ramachandra Guha and Satya Nadella. These interviews were interesting and they felt more genuine than the others. I was enjoying Devdutt Pattanaik's interview too but at a point it turned into a book about mythology more than a interview.

Overall, it was a okay read and I did enjoy some interviews thoroughly. If you are someone who just loves reading interviews, you can go for it.
Read more

Helpful
Comment Report abuse
See all reviews
Unlimited FREE fast delivery, video streaming & more
Prime members enjoy unlimited free, fast delivery on eligible items, video streaming, ad-free music, exclusive access to deals & more.
> Get started
Back to top
Get to Know Us
Connect with Us
Make Money with Us
Let Us Help You
EnglishChoose a language for shopping.
© 1996-2020, Amazon.com, Inc. or its affiliates