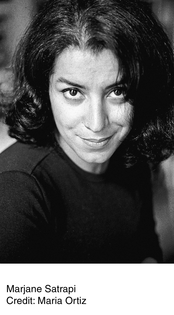 "Wildly charming . . . Like a letter from a friend, in this case a wonderful friend: honest, strong-willed, funny, tender, impulsive, and self-aware."
—Luc Sante, The New York Times Book Review

"The most original coming-of-age story from the Middle East yet."
—People

"Elegant, simple panels tell this story of growth, loneliness, and homecoming with poignant charm and wit."
—The Washington Post

"Humorous and heartbreaking . . . A welcome look beind the headlines and into the heart and mind of one very wise, wicked, and winning young woman."
—Elle

"Scary, moving, and etched out with a simplicity that speaks volumes. The arist is less a talent than a force."
—The Austin Chronicle

"Irresistible . . . Satrapi's story is too important—and too fascinating—to let go of."
—Fort Worth Star-Telegram

"Every revolution needs a chronicler like Satrapi."
—San Francisco Chronicle

"It is our good fortune that Satrapi has never stopped visiting Iran in her mind."
—Newsweek

"Persepolis 2 is much more than the chronicle of a young woman’s struggle into adulthood; it’s a brilliant, painful, rendering of the contrast between East and West, between the repression of wartime Iran and the social, political, and sexual freedoms of 1980’s Austria. There’s something universal about Satrapi’s search for self-definition, but her experiences in Vienna and Tehran are rendered with such witty particularity, and such heartbreaking honesty, that by the end of this book you’ll feel you’ve gained an intimate friend."
—Julie Orringer, author of How To Breathe Underwater

"Marjane Satrapi's books are a revelation. They're funny, they're sad, they're hugely readable. Most importantly, they remind you that the media sometimes tell you the facts but rarely tell you the truth. In one afternoon Persepolis will teach you more about Iran, about being an outsider, about being human, than you could learn from a thousand hours of television documentaries and newspaper articles. And you will remember it for a very long time."
—Mark Haddon, author of The Curious Incident of the Dog in the Night-Time

In Persepolis, heralded by the Los Angeles Times as "one of the freshest and most original memoirs of our day," Marjane Satrapi dazzled us with her heartrending memoir-in-comic-strips about growing up in Iran during the Islamic Revolution. Here is the continuation of her fascinating story. In 1984, Marjane flees fundamentalism and the war with Iraq to begin a new life in Vienna. Once there, she faces the trials of adolescence far from her friends and family, and while she soon carves out a place for herself among a group of fellow outsiders, she continues to struggle for a sense of belonging.
Finding that she misses her home more than she can stand, Marjane returns to Iran after graduation. Her difficult homecoming forces her to confront the changes both she and her country have undergone in her absence and her shame at what she perceives as her failure in Austria. Marjane allows her past to weigh heavily on her until she finds some like-minded friends, falls in love, and begins studying art at a university. However, the repression and state-sanctioned chauvinism eventually lead her to question whether she can have a future in Iran.
As funny and poignant as its predecessor, Persepolis 2 is another clear-eyed and searing condemnation of the human cost of fundamentalism. In its depiction of the struggles of growing up--here compounded by Marjane's status as an outsider both abroad and at home--it is raw, honest, and incredibly illuminating.

MARJANE SATRAPI was born in Rasht, Iran. She now lives in Paris, where she is a regular contributor to magazines and newspapers throughout the world, including The New Yorker and The New York Times. She is the author of Persepolis, Persepolis 2, Embroideries, Chicken with Plums, and several children's books. She cowrote and codirected the animated feature film version of Persepolis, which was nominated for an Academy Award for Best Animated Feature. Her  most recent film was a live-action version of Chicken with Plums.
Read more

4.7 out of 5 stars
4.7 out of 5
360 global ratings
How are ratings calculated?
To calculate the overall star rating and percentage breakdown by star, we don’t use a simple average. Instead, our system considers things like how recent a review is and if the reviewer bought the item on Amazon. It also analyses reviews to verify trustworthiness.

KL
4.0 out of 5 stars Very beautiful! ✨♥️
Reviewed in India on 20 February 2019
Verified Purchase
This is a second hand book from thriftstores. I bought it for 567. It's completely new and hardly used! It's a beautiful book and perfect sequence.
Totally recommend it for graphic readers or otherwise.

Sudeep Aradhya
4.0 out of 5 stars Loved the narration
Reviewed in India on 17 June 2019
Verified Purchase
Loved the narration and the story line. Its heart wrenching to know what Iran lost.
Read more
Helpful
Comment Report abuse

Page Turner
5.0 out of 5 stars A worthy sequel
Reviewed in the United Kingdom on 14 January 2008
Verified Purchase
Without seeing her photograph I can't be sure, but I guess that Marjane Satrapi's self-portraits - which feature throughout this book - are not flattering.

If so, that would be completely in keeping with the text which consistently reveals Satrapi candidly even when in her most immature and vain moments. She can be pretty blunt about some of her friends and relatives too.

All this brutal honesty is a fitting accompaniment to the startling tales she reveals from within the Iranian fundamentalist regime. There can be no more accessible insight into this extraordinary country.

My review of "Persepolis" described it as a "must read. "2" is more of the same so if you loved the first don't stop now!

Elizabeth Webster
5.0 out of 5 stars How to survive in Teheran
Reviewed in the United Kingdom on 1 September 2014
Verified Purchase
Marjane Satrapi's follow up to her comic book on growing to be a teenager in Iran, is cleverly written, with a wonderful sense of humour, so necessary to survive and handle a very difficult life from the point of view of her Western readers. Her drawings are wonderful, in simple and subtle ways conveying the emotional highs and lows and shocks, providing an excellent accompaniment to the text.
I saw the film a few years back, but still enjoyed the book

L. Christensen
4.0 out of 5 stars Four Stars
Reviewed in the United Kingdom on 26 June 2017
Verified Purchase
Just as well told and interesting as the first Persepolis!
Read more
Report abuse

Matilda Engelmark
5.0 out of 5 stars Absolutely beautiful.
Reviewed in the United Kingdom on 18 January 2015
Verified Purchase
You wont be able to put down these graphic novels. Absolutely beautiful.
Read more
Report abuse
See all reviews
Unlimited FREE fast delivery, video streaming & more
Prime members enjoy unlimited free, fast delivery on eligible items, video streaming, ad-free music, exclusive access to deals & more.
> Get started
Back to top
Get to Know Us
Connect with Us
Make Money with Us
Let Us Help You
EnglishChoose a language for shopping.
© 1996-2020, Amazon.com, Inc. or its affiliates