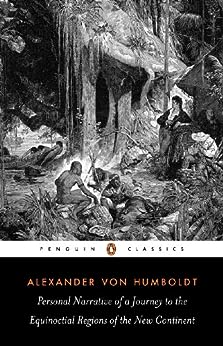 Personal Narrative of a Journey to the Equinoctial Regions of the New Continent (Penguin Classics) New Ed Edition, Kindle Edition

Alexander von Humboldt became a wholly new kind of nineteenth-century hero - the scientist-explorer - and in Personal Narrative he invented a new literary genre, the travelogue. Between 1799 and 1804 he explored the tropical Spanish Americas, by his death in 1859 he had won international fame. He was the first European to discuss, draw and speculate on Aztec art, the first to observe reverse polarity in magnetism, the first to propagate the notion of seismic waves, the first to discover why America is called America. A true Romantic, an admirer of Rousseau and close friend of Goethe, Humboldt was a passionate observer, never a colonial despoiler, and his writings made a profound impact upon the course of Victorian science. This volume contains a fascinating selection from Humboldt's original 1,997 pages of Personal Narrative, in the first English translation to appear since 1851. --This text refers to an alternate kindle_edition edition.

Alexander von Humboldt was born on the family estate at Tegel in Berlin in 1769. With his elder brother Wilhelm he was educated by tutors and then at Frankfurt, Göttingen and Hamburg Universities where he studied botany, literature, archaeology, electricity, mineralogy and the natural sciences. In 1790 he traveled abroad and published his first works in botanical and chemical journals. While at Jena he befriended Goethe. He worked in the Prussian Mining Administration until his mother died in 1796. A large inheritance enabled Humboldt to travel; after a few frustrations he was allowed by Charles IV of Spain to travel in the Spanish American colonies at his own expense, with his companion Aimé Bonpland. After five years in the New World (1799-1804) Humboldt settled in Paris to begin publishing his encyclopaedic Relation historique du voyage aux regions équinoxiales du nouveau continent, finally completed in thirty volumes in 1834, where the Personal Narrative comprised volumes 28 to 30. Humboldt was not only a prominent figure in the Parisian scientific world but also Chamberlain to Friedrich Wilhelm III, and Councilor of State to Friedrich Wilhelm IV. In 1829 he traveled to Russia and Central Asia and published his account in French in 1843. In 1834 he began his comprehensive survey of creation, Kosmos, completed posthumously in 1862. He died in 1859, a bachelor, and was buried in the family vault at Tegel, honored as one of the great speculative scientific travelers of the nineteenth century.

Jason Wilson was born in Mauritius in 1944, Was a lecturer at Kings College, London, and is currently Reader in Latin American Literature at University College, London. He has published Octavio Paz: A Study of his Poetics (1979), Octavio Paz (1986), An A-Z of Latin American Literature in English Translation (1989), the Traveler’s Literary Companion to South and Central America (1993) and essays on W.H. Hudson, Charles Darwin, Julio Cortázar and Latin American poetry. --This text refers to an alternate kindle_edition edition.

4.4 out of 5 stars
4.4 out of 5
50 global ratings
How are ratings calculated?
To calculate the overall star rating and percentage breakdown by star, we don’t use a simple average. Instead, our system considers things like how recent a review is and if the reviewer bought the item on Amazon. It also analyses reviews to verify trustworthiness.
Top reviews

acorn and oak
5.0 out of 5 stars Readable travels, brilliant access to a historical perspective
Reviewed in the United Kingdom on 1 January 2014
Verified Purchase
I admit to not reading the whole of the introductory text but what I read was useful. I then skipped to Humboldt's narrative and was pleased with how enjoyable it was to read and felt familiar with his way of discovering new places despite the centuries of time in between. Very much a travel story describing the natural environment, people and places but light on his more scientific findings. I sat with large maps of both Tenerife and Venezuela by my side which helped in understanding the scale of exploration on foot, with mules and in canoes. Would definitely recommend reading this for fireside pleasure and certainly if lucky enough to visit these places.
Read more
15 people found this helpful
Report abuse

Mr. A. Maher
4.0 out of 5 stars Interesting observations from a pioneer ecologist
Reviewed in the United Kingdom on 24 June 2021
Verified Purchase
By all accounts, Humboldt didn't know what to leave out of his book, so it makes sense to have an abridged edition.
My copy arrived in good condition, although the packaging seemed a bit basic.

After reading two outstanding biographies on Alexander Von Humboldt...Gerard Helferich’s “Humboldt’s Cosmos” and Andrea Wulf’s “The Invention of Nature...” I decided to read his personal narrative while exploring and naturalizing in Venezuela. Amazing and still significant today!

In 1799 Humboldt and botanical companion Aime Bonpland spent sixteen months combined on the coast of Venezuela and interior along the Orinoco River. His stories, descriptions, way of life and day to day existence in the tropics is striking...keep in mind, this is over two hundred years ago.
Thousands of new plant and animal species, lost and soon to be extinct cultures, astronomical and physical observations, geographical measurements... all while dodging jaguars, crocodiles, hordes of pestering and festering mosquitoes, skin boring insects, disease, venomous snakes, etc.

This is a well done abridgement of Humboldt’s narrative...if it wasn’t condensed, it would be thousands of pages.

The reason for four stars and not five? In truth, his exploits on the Venezuela coast can be somewhat tiring and redundant, but once they travel up the Orinoco the excitement begins...plus, the map is quite vague and generalized whereas in the two books cited above they are more informative.
“Everything is Interrelated”- Humboldt

B. Dutcher
4.0 out of 5 stars Adventures in the Golden age of Discovery
Reviewed in the United States on 31 March 2015
Verified Purchase
Great story narrative. Only wish there was a map or some link to the locations of his adventures.
Read more
6 people found this helpful
Report abuse
See all reviews
Back to top
Get to Know Us
Connect with Us
Make Money with Us
Let Us Help You
EnglishChoose a language for shopping.
© 1996-2021, Amazon.com, Inc. or its affiliates