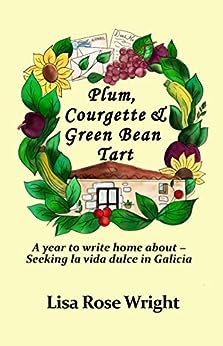 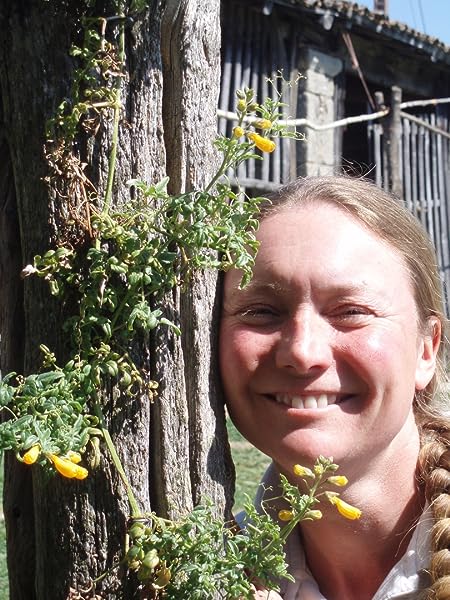 by Lisa Rose Wright (Author) Format: Kindle Edition
See all formats and editions
Sorry, there was a problem loading this page. Try again.
What people are saying about Plum, Courgette & Green Bean Tart“Pure energy on paper”“Strongly recommended book for those who enjoy restarting abroad memoirs and enjoy a twist on the genre.”“Wish you every success with your book” Bill Bryson“I found this gem of a book on Amazon and it is a brilliant read.”

Have you ever wanted to leave the rat race, move abroad and live the good life somewhere green and bountiful?

Lisa and her partner, the enigmatic S, did just that. In 2007 they left their jobs, as newt catchers, and their native English shores for beautiful green Galicia, in the remote northwest of Spain – a place of mystery and mists, Celtic legends and bagpipes, and a language of its very own. There, they set to work to self-renovate a derelict farmhouse, whilst trying to become self-sufficient and learn more about this untamed part of the Iberian peninsula.

When S suggested a three week holiday, walking one of the old pilgrim routes to Santiago de Compostela, little did they know it would change their lives totally. From the outset with too much weight and too little training they realised their Camino goal was not going to be met. With failure looming, they chose to abandon their pilgrimage to view abandoned houses instead.

“We first saw A Casa do Campo on a rainswept November morning. Mists were rising and water dripped onto the rusted kitchen range from gaping holes in the roof. There were bird’s nests in the bedrooms and bats in the hallway. Bare, dead looking trees surrounded the property which the Spanish estate agent enthusiastically promised us would be laden with fruit come August. It was love at first sight.”

If only buying it were so easy!

Deaths, taxes and even Spanish bureaucracy fail to dent their enthusiasm and eventually Lisa and S head off for their new Good Life abroad with an overloaded Ford Escort, tool bags, vegetable seeds and a trusty stereo stacking system. Oh, and two deckchairs in which to relax in the evenings.

Plum, Courgette & Green Bean Tart tells the story of that first 12 months living la vida dulce, The Good Life, in this beautiful green part of mainland Spain, Galicia, or Galiza in its own language.

This fly on the wall account uses genuine letters home and diary entries to tell a true story: a story of battles with Spanish bureaucracy and mañana timekeeping; of struggles to self-renovate a derelict home before the bats and the weather reclaim it; of learning to protect chickens against aerial assassins and precious food for the table from underground vegetable thieves; of gardening in bizarre weather conditions; of discovering how to cook delicious and sometimes interesting meals on a finally mouse-free wood burning stove; and of falling in love.

Plum, Courgette & Green Bean Tart, Book One of the ‘writing home’ series, has an immediacy which has you falling under its spell. Twelve chapters tell a story of twelve months, of four seasons, of a whole year to write home about. Also included are genuine Galician recipes plus a plum, courgette & green bean tart to make, and a free photo album to follow as the story unfolds. The interwoven information and anecdotes about Galicia are told by someone who has truly fallen in love with this little known and timeless green region with its gentle people and erratic weather, ensuring this will truly be a book to write home about.

4.3 out of 5 stars
4.3 out of 5
108 global ratings
How are ratings calculated?
To calculate the overall star rating and percentage breakdown by star, we don’t use a simple average. Instead, our system considers things like how recent a review is and if the reviewer bought the item on Amazon. It also analyses reviews to verify trustworthiness.
Top reviews

Beth Haslam
5.0 out of 5 stars A super Book!
Reviewed in the United Kingdom on 2 April 2021
Verified Purchase
What a captivating memoir!

English ecologists Lisa, and her partner, S, take time off from newt catching to go on a walking holiday. Their decision to follow a Camino route in Spain turns out to be a doomed adventure, but it is one that leads to a positive life-changing event.

The couple quickly fall in love with Galicia, a region in northwest Spain, and eventually buy a house. This isn’t an ordinary property. The building had been abandoned and the grounds badly neglected. Both need significant restoration work.

I was quickly immersed in the author’s account of their toils and joys as they strive to achieve self-sufficiency. Problems with bureaucracy, life in a leaky ruin, the endless slog to rebuild their home and initiatives to create a new income are all beautifully described with non-complaining frankness.

The author tells her story through a clever blend of narrative, diary notes and letters ‘to Mum’. This, together with her freestyle form of writing, works beautifully, as do the recipes she shares along the way.

Lisa Rose Wright’s can-do attitude is hugely inspiring, and her sunny personality shines throughout this book. I found it an intoxicating, fun memoir and will be reading her next instalment soon.
Read more
One person found this helpful
Report abuse

Judith Benson
5.0 out of 5 stars Plum, courgette and green bean tart
Reviewed in the United Kingdom on 3 October 2020
Verified Purchase
What a delightful memoir this is.
Loved the way the year is described through letters to her mum back in the UK.
Finding the property they want then all the renovations needed with the added interest of the garden , growing vegetables and fruit and using all the produce.
I always love reading about other peoples journeys of buying abroad and the trials and tribulations to accomplish this after doing this ourselves in 2003.
I loved too the read about Galicia, an area of Spain we hope to explore one of these days.
A wonderful read and hope to read more from Lisa.
Well done.
Read more
Report abuse

Diana D
5.0 out of 5 stars Descriptions
Reviewed in the United Kingdom on 27 September 2021
Verified Purchase
Although not an encouraging start, the tale does improve! I love the descriptions of endless produce and all the different recipes they try out to use it. What a wonderful lifestyle! Also, I loved the description of the matzana process. How different food production is in Galicia! I am not keen on the partner just referred to as S, as it makes him rather faceless. Glad there is a lot about people and food, as well as renovations. Next book in the series is on my list to buy!
Read more
Report abuse

Carrie D
5.0 out of 5 stars Thoroughly enjoyable read
Reviewed in the United Kingdom on 24 September 2020
Verified Purchase
A wonderful account of the beginning of Lisa and S's life in Galicia. I thoroughly enjoyed the format, switching between Lisa's narrative, letters to her mum, and her diary entries.
The information about buying a house, dealing with local bureaucracy, becoming a part of the local community, the hard work involved in renovating the house and caring for their land, was very interesting and beneficial to one who has thoughts of moving there at some point in the future.
The addition of the recipes and the picture book made this memoir extra special, really giving a feel for Lisa and S's life.
Really looking forward to reading book two!
Read more
One person found this helpful
Report abuse

Marian Quick
5.0 out of 5 stars Plum, Courgette & Green Bean Tart: A year to write home about.
Reviewed in the United Kingdom on 30 December 2020
Verified Purchase
Please don’t think that this book is just recipes, although it has some really good ones. They are such a brave couple. Buying a derelict house to renovate and live in at the same time as well as not speaking the language. They are so patient too - maybe it’s all those lovely Fiestas that keep them sane throughout it all. Well worth a read.
Read more
Report abuse
See all reviews

In 2007 Lisa left a promising career as an ecologist catching protected reptiles and amphibians, and kissing frogs, to move to beautiful green Galicia with her blue-eyed prince (who has since become her blue-eyed husband but that’s another story).

She divides her time equally between growing her own food, helping to renovate a semi-derelict house (or actually two… but that’s also another story) and getting out and about to discover more of the stunningly beautiful area she calls home.

Lisa is happiest outside in her huerta weeding, watching the antics of her chickens, or in her kitchen cooking interesting recipes on her wood burning range.