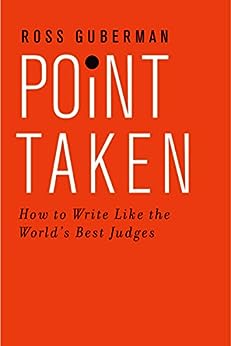 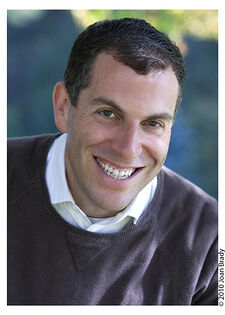 by Ross Guberman (Author) Format: Kindle Edition
See all formats and editions
Sorry, there was a problem loading this page. Try again.
In Point Taken, Ross Guberman delves into the work of the best judicial opinion-writers and offers a step-by-step method based on practical and provocative examples. Featuring numerous cases and opinions from 34 esteemed judges - from Learned Hand to Antonin Scalia - Point Taken, explores what it takes to turn "great judicial writing" into "great writing".

Guberman provides a system for crafting effective and efficient openings to set the stage, covering the pros and cons of whether to resolve legal issues up front and whether to sacrifice taut syllogistic openings in the name of richness and nuance. Guberman offers strategies for pruning clutter, adding background, emphasizing key points, adopting a narrative voice, and guiding the reader through visual cues. The structure and flow of the legal analysis is targeted through a host of techniques for organizing the discussion at the macro level, using headings, marshaling authorities, including or avoiding footnotes, and finessing transitions. Guberman shares his style "Must Haves", a bounty of edits at the word and sentence level that add punch and interest, and that make opinions more vivid, varied, confident, and enjoyable. He also outlines his style "Nice to Haves", metaphors, similes, examples, analogies, allusions, and rhetorical figures. Finally, he addresses the thorny problem of dissents, extracting the best practices for dissents based on facts, doctrine, or policy. The appendix provides a helpful checklist of practice pointers along with biographies of the 34 featured judges.
Read more
Previous page
Next page
Kindle e-Readers
Kindle Fire Tablets
Free Kindle Reading Apps
See all supported devices

If I were a judge, I'd make this required reading for my law clerks. Point Taken is an invaluable resource for any judge who cares about the craft of writing opinions." -David Lat, Managing Editor, Above the Law

In Point Taken, Guberman has done both the wonderful and the impossible. He's done a wonderful job synthesizing the craft of writing judicial opinions. His insights and techniques are extraordinary, and he demonstrates great discipline in presenting a menu of approaches rather than dictating a particular style. He provides a superb tool for judges and arbitrators (and, yes, law clerks) to do their jobs better while cultivating a style that suits them. He also achieved what I thought was impossible: he transformed legal writing into a guilty pleasure. The book is fun, which is rare for any work that teaches so much." -Noah Messing, Lecturer, Yale Law School and AAA Arbitrator --This text refers to the paperback edition.

Ross Guberman is the president of Legal Writing Pro. From Alaska to Paris and Hong Kong, he has conducted more than a thousand workshops on three continents for many of the world's largest and most prestigious law firms, for judges and courts, and for corporations and governmental agencies. He has spoken at several judicial conferences, has trained both new and experienced federal judges, and has worked with many judges abroad as well. Mr. Guberman is a graduate of Yale, the Sorbonne, and The University of Chicago Law School. He is the coauthor of Deal Struck: The World's Best Drafting Tips (Legal Writing Pro Press, 2014) and the author of Point Made: How to Write Like the Nation's Top Advocates (Now in its Second Edition, Oxford University Press, 2014). --This text refers to the paperback edition.

4.8 out of 5 stars
4.8 out of 5
59 global ratings
How are ratings calculated?
To calculate the overall star rating and percentage breakdown by star, we don’t use a simple average. Instead, our system considers things like how recent a review is and if the reviewer bought the item on Amazon. It also analyses reviews to verify trustworthiness.
Top reviews

Hande Z
5.0 out of 5 stars Good Points
Reviewed in the United States on 23 September 2016
Verified Purchase
‘Ignorance of the law is no excuse’ is a well-known phrase. Judges are responsible when the law is badly expressed in their judgments. Furthermore, it is a joy to read good writing, not just novels and essays, but judgments as well – after all, every court case is itself a story.

The rules (and their exceptions) are not much different from the rules of good writing generally, but a judgment of a court has specific objectives. It determines the rights of the parties and lays down the orders that they have to obey. To achieve this, the judgment and orders must not only be reasonable and right, they have to be clear. Secondly, the judgment ought to explain why the judge ruled as he did. To do this, the facts must be set out and the dispute clearly enunciated.

Guberman’s book helps judges perform this basic task with effective advice and some fine examples. If judges read this book and can discipline themselves to follow it recommends, there will be few badly written judgments. A judgment must not only be right; it must read right.
Read more
7 people found this helpful
Report abuse

J. H.
5.0 out of 5 stars Great for neutrals and law clerks
Reviewed in the United States on 27 May 2019
Verified Purchase
If you're a law clerk or a Judge, this is a great book to have on your shelf. Not just helpful, this book is enjoyable! Worth every penny.
Read more
5 people found this helpful
Report abuse
See all reviews

Ross Guberman is the founder and president of Legal Writing Pro, an advanced legal-writing training and consulting firm. He has conducted more than a thousand programs on three continents for many of the largest and most prestigious law firms and for dozens of state and federal agencies and bar associations.

Ross is also a Professorial Lecturer in Law at The George Washington University Law School.

He holds degrees from Yale, the Sorbonne, and The University of Chicago Law School.

An active member of the bar, Ross is also a former professional musician, translator, and award-winning journalist. After the federal takeover of Fannie Mae, Slate called his 2002 investigation of the company "brilliant and prescient."

He has commented on business, law, writing, and lawyer development for major newspapers, radio stations, and television networks, and he has also addressed several major international conferences.

The American Society for Training & Development has awarded Ross its Certified Professional in Learning and Performance™ credential for passing an eight-part test and submitting his standardized writing assessment.

A Minnesota native, Ross lives with his wife and two children outside Washington, DC. He can be reached at ross@legalwritingpro.com.