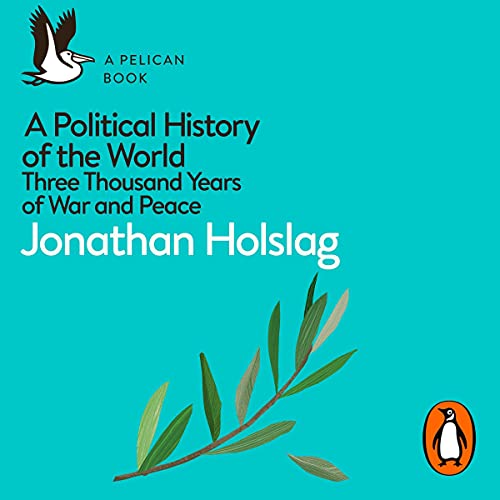 A Political History of the World: Three Thousand Years of War and Peace (A Pelican Book)

Penguin presents the audiobook edition of A Political History of the World by Jonathan Holslag, read by Roy McMillan.

In 3,000 years of history, China has spent at least 11 centuries at war. The Roman Empire was in conflict during at least 50 percent of its lifetime. Since 1776, the United States has spent over 100 years at war. The dream of peace has been universal in the history of humanity. So why have we so rarely been able to achieve it?

In A Political History of the World, Jonathan Holslag has produced a sweeping history of the world, from the Iron Age to the present, that investigates the causes of conflict between empires, nations and peoples and the attempts at diplomacy and cosmopolitanism. A bird's-eye view of 3,000 years of history, the book illuminates the forces shaping world politics from ancient Egypt to the Han Dynasty, the Pax Romana to the rise of Islam, the Peace of Westphalia to the creation of the United Nations.

This truly global approach enables Holslag to search for patterns across different eras and regions and explore larger questions about war, diplomacy, and power. Has trade fostered peace? What are the limits of diplomacy? How does environmental change affect stability? Is war a universal sin of power? At a time when the threat of nuclear war looms again, this is a much-needed history intended for students of international politics and anyone looking for a background on current events.

4.4 out of 5 stars
4.4 out of 5
86 global ratings
How are ratings calculated?
To calculate the overall star rating and percentage breakdown by star, we don’t use a simple average. Instead, our system considers things like how recent a review is and if the reviewer bought the item on Amazon. It also analyses reviews to verify trustworthiness.
Top reviews

Nirmal Patel
4.0 out of 5 stars The modern history epic
Reviewed in India on 29 May 2021
Verified Purchase
Move over, Herodotus. For today this book is the definitive work of history. No reader or watcher of today's news will have the proper context without a perspective drawn from this book.
Read more
One person found this helpful
Helpful
Report abuse

sameer
4.0 out of 5 stars Absolutely recommend
Reviewed in India on 27 April 2021
Verified Purchase
An enlightening read ! Recommend it to all those who need to learn about battles fought from the beginning of history
Read more
One person found this helpful
Helpful
Report abuse
See all reviews

Avid reader
4.0 out of 5 stars Very expensive for the quality of the print
Reviewed in the United Kingdom on 25 October 2018
Verified Purchase
This is a work of art! Well researched and written!
Very disappointed with the price! £25 for a mass market paperback quality (it got a hardcover but the pages are hair thin).
Happy I purchased the knowledge, but the means of delivering it could be better.
Shame really
Read more
One person found this helpful
Report abuse

Amazon Customer
1.0 out of 5 stars DENSE ENCYCLOPEDIA DO NOT READ
Reviewed in the United Kingdom on 5 November 2021
Verified Purchase
Extremely difficult to read. It feels like reading a dense encyclopedia without any of the interesting bits. It rarely discusses what the events meant for society and only focuses on minute details. It lists wars after wars and will randomly name societies that were never introduced. Might be ok for someone who already knows a lot about history BCE. Very disappointed with this book.
Read more
Report abuse

Rose Oxford
1.0 out of 5 stars Badly damaged
Reviewed in the United Kingdom on 26 June 2021
Verified Purchase
Too busy to organize returning this product.Very disappointed with the condition of the book:pages inside bent;the back cover marked with thick black lines.Not suitable to give as a gift.
Read more
Report abuse

elena frunzeti
5.0 out of 5 stars good price, delivered fast and in good conditions
Reviewed in the United Kingdom on 2 December 2019
Verified Purchase
it is a very good book and it was delivered in great conditions.
Read more
Report abuse
See all reviews
Back to top
Get to Know Us
Connect with Us
Make Money with Us
Let Us Help You
EnglishChoose a language for shopping.
© 1996-2022, Amazon.com, Inc. or its affiliates