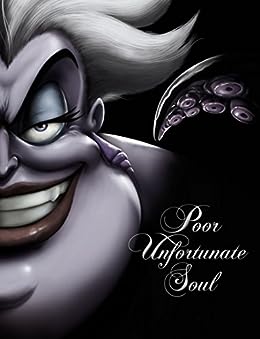 by Serena Valentino (Author), Disney Storybook Art Team (Illustrator) Format: Kindle Edition
See all formats and editions
Sorry, there was a problem loading this page. Try again.
The third novel in Serena Valentino's (Fairest of All, Beast Within) "VILLAINS" trilogy, featuring the story of the Little Mermaid from the perspective of the sea witch Ursula
Read more
Previous page
Next page

Serena Valentino has been weaving tales that combine mythos and guile for the past decade. She has earned critical acclaim in both the comic and horror domains, where she is known for her unique style of storytelling, bringing her readers into exquisitely frightening worlds filled with terror, beauty, and extraordinary protagonists. The books in her best-selling Villains series are best enjoyed when read in the following order: Fairest of All, The Beast Within, Poor Unfortunate Soul, Mistress of All Evil.
--This text refers to an alternate kindle_edition edition.

4.7 out of 5 stars
4.7 out of 5
2,093 global ratings
How are ratings calculated?
To calculate the overall star rating and percentage breakdown by star, we don’t use a simple average. Instead, our system considers things like how recent a review is and if the reviewer bought the item on Amazon. It also analyses reviews to verify trustworthiness.
Top reviews

Tobias
1.0 out of 5 stars A poor unfortunate soul of a book
Reviewed in the United Kingdom on 5 November 2018
Verified Purchase
Ursula has, and always will be one of my favourite Disney villains. The cover is beautiful, she looks divine (much like the drag queen that inspired her), with a slight look of menace in her eyes and originally I liked the idea - to fill in the back story of Ursula and figure out why she came to be who she was.

The novel opens frighteningly, with perhaps a very graphic description of Ursula’s wrath upon others, so I’m not sure if it quite fits for the opening to a Disney novel. I add that this takes place in in the (Essex) town of Ipswich no less - dare I say chosen just because of the name, nothing more...

Shortly after, new characters are introduced, three sisters who are friends with the sea witch. They’ve a cat… but we’re now at the point where things take a second flight of fancy, where their cat has the same name as the author? Pardon... Excuse me?

Elsewhere other Disney characters are mentioned and somehow the Disneyverse is intertwined? I don’t want a story featuring Snow White, Maleficent or The Beast… this is supposed to be about Ursula. Granted, I read this as a standalone novel, rather than part of a series. By this point, I think I had slightly lost the plot with the book as a whole and found great delight in picking out its flaws thereafter.

Sebastian and Flounder don’t exist in this version of the story, but somehow Scuttle does; “Mum” features a few times; Tea is taken with cream and sugar and the one that takes the biscuit is that somehow The Enchantress from Beauty and The Beast has a major plot role of The Little Mermaid.

From what originally held so much promise and could have been potentially entertaining, we end up with dialogue straight from the 1989 story in places, and the end result not really being about Ursula at all...

Perhaps someone younger than myself, would enjoy this, but me, as a diehard fan of the original 1989 classic, I feel this is a poor unfortunate soul of a book.
Read more
19 people found this helpful
Report abuse

Toni
1.0 out of 5 stars Disappointing, not what I expected
Reviewed in the United Kingdom on 12 January 2021
Verified Purchase
I was so excited to read this book! The Little Mermaid is my favourite so to see Ursula’s backstory as to why she became so full of hate fascinated me.

In the film there’s reference to her being banished by King Triton but there’s no backstory there which I think would be an interesting read... if told properly unlike in this book!

The book is more about 4 witches than it is about Ursula? So confusing and does not have much relevance to the actual story, it seems to reference a lot of people other Disney characters, it’s asif the series of books are intertwined with each other telling a story of its own instead of focusing on the villain the book is supposedly about.

In the book it references to King Triton and Ursula being brother and sister contradicting the little mermaid 2: return to the sea as Morgana is Ursula’s sister there’s no relation between them and Triton.

This book is more of a childish fantasy however, I wouldn’t recommend for children either as there are gruesome parts throughout.

I was going to buy some other books from this series but after reading this one I won’t bother. So disappointed it isn’t true.
Read more
3 people found this helpful
Report abuse

FeedMyReads
5.0 out of 5 stars You either love or hate the twisted tales
Reviewed in the United Kingdom on 15 May 2020
Verified Purchase
Disney offers up numerous books in the twisted tales series and I am aware that some people find the crossover of characters from other stories can frustrate but for me personally I think these stories are well written and an interesting take on the well known Disney characters we all know and love (or love to hate) and this is a book I really enjoyed reading and have re-read once already.
Read more
2 people found this helpful
Report abuse

Phoebs Lyle
4.0 out of 5 stars GOOD, BUT COULD HAVE BEEN BETTER
Reviewed in the United Kingdom on 27 September 2020
Verified Purchase
As a fan of Disney villains, I liked the book, and I thought it was good. But not too sure I liked the whole background thing with Cerce and Ursula. I love Ursula as a villain in her own right, and loved the background story of what Triton let happen to her Dad, but feel like that could have had a much bigger part to play in the ending than it actually did.
Read more
One person found this helpful
Report abuse

Stephen
5.0 out of 5 stars Well written story in an expanding universe
Reviewed in the United Kingdom on 21 October 2018
Verified Purchase
The wife absolutely loves these books, what should be made clear is that you need to read them in order as there are references across the series, well written and great story references she’s really enjoyed them all and is prayin that more are in the pipeline.
Read more
4 people found this helpful
Report abuse
See all reviews
Back to top
Get to Know Us
Connect with Us
Make Money with Us
Let Us Help You
EnglishChoose a language for shopping.
© 1996-2022, Amazon.com, Inc. or its affiliates