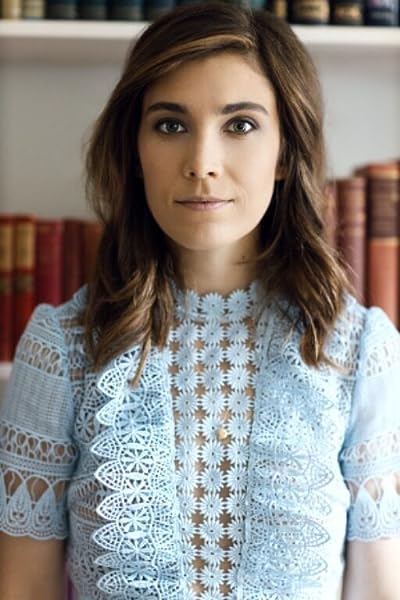 by A Natasha Joukovsky (Author), Eva Kaminsky (Reader)
4.1 out of 5 stars 40 ratings
See all formats and editions
Sorry, there was a problem loading this page. Try again.
10 Days Replacement Only
Read more Read less
Previous page
Next page

Gossip Girl meets The Secret History...Joukovsky's ability to both skewer and sympathize with her characters would impress Edith Wharton herself.

The Portrait of a Mirror is a wickedly fun debut--a novel that floats seamlessly between Ovid and dive bars, and that shows us the perils of getting exactly what we want.

-- "Grant Ginder, author of The People We Hate at the Wedding"

[A] modern retelling of the myth of Narcissus.

-- "Emily Temple, author of The Lightness"

Clever and witty and intricate...[a] richly-layered portrait of two couples caught at a crossroads.

In a wickedly fun debut you won't be able to put down, Joukovsky reinvents the myth of Narcissus for modern times.

Part sex comedy, part satire about the world's most hatable people. Joukovsky is unsparing--and hilarious--on the topics of marriage, success, and the self-absorption of the privileged class.

-- "Erin Somers, author of Stay Up with Hugo Best"

This contemporary novel of manners is so sly and sharp and well-observed, so densely witty and full of piercing offhand observation...a not-quite-love story about deceptive infatuation.

This delightful, perfectly rendered novel is filled with gossip and charged exchanges, bad decisions made by rich people, but also some pretty interesting questions about art and value...I was beyond charmed.

Two well off couples' Iives intertwine in this hilarious reinvention of the myth of Narcissus...and they're all too immersed in desire to know what they want.

A. Natasha Joukovsky holds a BA in English from the University of Virginia and an MBA from New York University's Stern School of Business. She spent five years in the art world, working at the Philadelphia Museum of Art and the Metropolitan Museum of Art in New York before pivoting into management consulting. The Portrait of a Mirror is her debut novel. She lives in Washington, DC.

Eva Kaminsky is a New York-based actor and audiobook narrator with over 150 titles to her credit. She trained at Boston University and has acted in numerous productions on television and film, including Extremely Loud and Incredibly Close, Happyish, Ugly Betty, ER, Numbers, Law & Order, and others.

Start reading The Portrait of a Mirror: A Novel on your Kindle in under a minute.

4.1 out of 5 stars
4.1 out of 5
40 global ratings
How are ratings calculated?
To calculate the overall star rating and percentage breakdown by star, we don’t use a simple average. Instead, our system considers things like how recent a review is and if the reviewer bought the item on Amazon. It also analyses reviews to verify trustworthiness.
Top reviews

MEO
5.0 out of 5 stars Loved this book - witty, thought provoking, laugh-out-loud funny
Reviewed in the United States on 1 June 2021
Verified Purchase
This book is the perfect combination of beach read (plot) and literature (the writing, the mirror to our own lives, the constant thinking back to it after finishing).

Really liked the story itself, but the writing is what I enjoyed the most; often with literature in this style, I appreciate the writing and the craft but end up skimming long descriptions and narratives to get back to the plot. Not the case here - I found myself wanting to save passages every few pages or read out loud to a friend, either because they were laugh-out-loud funny, were genuinely thought-provoking / made me question elements of my own behaviors and relationships, or were just brilliantly descriptive in a way that added to the narrative and not just the page count.

Luke Burgis
5.0 out of 5 stars A Stellar Book with Many Layers—and wildly fun at the same time
Reviewed in the United States on 7 July 2021
Verified Purchase
Joukovsky has written a brilliant book. I found the psychological depth of this novel striking, even while it was uncomfortable because it alludes to a secret at the heart of social relations: the hidden machinations of desire that we are all, at some level, caught up in. The way that Joukovsky narrates the psychological machinations of an argument between partners, for example, was chilling. It's like the author discovered a secret key to relationship dynamics that she embedded—beautifully—in a very modern story about some of the most fundamental of human questions: how do we know what to want? And how are those desires generated and shaped in the first place?

Though the characters in Portrait exist in high-society, they are subject to a universal force that Joukovsky has written about with penetrating insight, and that any attentive reader will see in themself. The book is called "The Portrait of a Mirror", and it is clearly a portrait of a mirror that a reader is meant to hold up to themselves. It works.

This book can be read at multiple levels. It could be a fun beach read on the one hand if you enjoy the witty dialogue (I have never seen text messages more true to life in a book), the corporate intrigue, the romantic whirlwind, much of it just pure fun and page-turning delight—but it's also a book that I could use to teach a seminar at my university (and I may do just that): there are three or four layers deeper that one can go for insights into human nature, from the psychological to the social and cultural and even workplace dynamics. The reader even gets a crash course in art history as one of the main characters describes several important masterpieces. I was entertained, but I also came away having learned something new about the world and about myself.

The novel is extraordinarily ambitious, but Joukovsky pulls it off based both on the strength of our prose and the depth of her experience, which becomes apparent throughout the book in the vividness of the scenes that at times made me laugh out loud and at others nearly made me cry.

Kyle M
5.0 out of 5 stars A must read - five stars!
Reviewed in the United States on 1 June 2021
Verified Purchase
A stunning debut for an author who has the writing skills necessary to delight readers for decades to come. Portrait skewers a subset of the population who largely deserves it in a rich, layered look into the ridiculous lives of two well heeled couples. Book of the summer? Book of the summer!
Read more

5.0 out of 5 stars A must read - five stars!
Reviewed in the United States on 1 June 2021
A stunning debut for an author who has the writing skills necessary to delight readers for decades to come. Portrait skewers a subset of the population who largely deserves it in a rich, layered look into the ridiculous lives of two well heeled couples. Book of the summer? Book of the summer!
Images in this review

Kyle O
5.0 out of 5 stars The book of the summer
Reviewed in the United States on 2 June 2021
Verified Purchase
Every line “The Portrait of a Mirror” is beautifully written, but it’s also a funny, eye-opening, addicting read that kept me up way too late way too many times. Highly recommend.
Read more
3 people found this helpful
Report abuse

Brian Gavron
5.0 out of 5 stars Recursion at it's best
Reviewed in the United States on 1 June 2021
Verified Purchase
The Portrait of a Mirror is truly a work of art. The prose is so clever and offers thought-provoking commentary on our (somewhat present day) society. A must read!
Read more
3 people found this helpful
Report abuse
See all reviews
Back to top
Get to Know Us
Connect with Us
Make Money with Us
Let Us Help You
EnglishChoose a language for shopping.
© 1996-2021, Amazon.com, Inc. or its affiliates