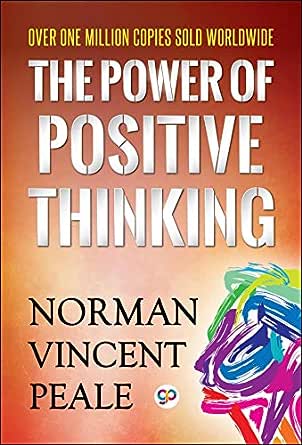 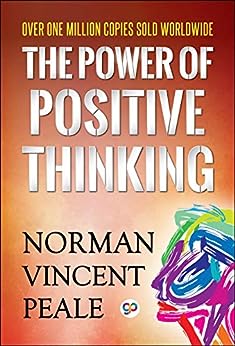 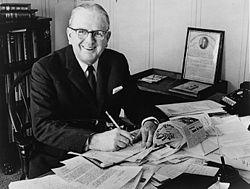 Norman Vincent Peale, an American minister and author, was a progenitor of the theory of Positive Thinking. Born in Bowersville, Ohio, Peale graduated from Bellefontaine High School. He earned degrees at Ohio Wesleyan University and Boston University School of Theology. He was brought up as a Methodist and was ordained as a Methodist minister in 1922. A decade later, Peale changed his religious affiliation to the Reformed Church in America in 1932 and thus began his 52-year tenure as pastor of Marble Collegiate Church in Manhattan. In 1935, Peale also started a radio program, “The Art of Living”, which lasted for 54 years and gained immense popularity. He was a copious writer and his most widely read book, The Power of Positive Thinking sold around 5 million copies. Peale also cofounded The Horatio Alger Association along with Peale Center, Guideposts Publications and the Positive Thinking Foundation, all of which aim to advance Peale’s theories of Positive Thinking. --This text refers to the paperback edition.

Translated into fifteen languages with more than 7 million copies sold, The Power of Positive Thinking is unparalleled in its extraordinary capacity for restoring the faltering faith of millions. In this insightful program, Dr. Peale offers the essence of his profound method for mastering the problems of everyday living. You will learn: How to eliminate that most devastating handicap---self doubt How to free yourself from worry, stress and resentment How to climb above problems to visualize solutions and then attain them Simple prayerful exercises that you can do every day, through-out the day, to reinforce your new-found habit of happiness Eliminating all the negative thoughts that prevent you from achieving happiness and success, The Power of Positive Thinking is an inspiring program that will help you create a positive change in your life. --This text refers to an alternate kindle_edition edition.

This book had an amazing impact on my life. --The Daily Express --This text refers to an alternate kindle_edition edition.

Believe in yourself! Have faith in your abilities! With sound self-confidence you can succeed. --This text refers to an alternate kindle_edition edition.

Faith in yourself makes good things happen to you. This classic guide to self-esteem and success will help you learn how to: break the worry habit; get other people to like you; avoid "the jitters" in your daily work; believe in yourself and everything you do; develop the power to reach your goals, and so much more.


From the Paperback edition. --This text refers to an alternate kindle_edition edition.

Norman Vincent Peale, one of the most influential clergymen of his time, is the author of forty-six books, including the international bestseller The Power of Positive Thinking. Dr. Peale's legacy continues today through the Peale Center for Christian Living, the Outreach Division of Guideposts, www.dailyguide posts.com/positivethinking. --This text refers to an alternate kindle_edition edition.

Beautifully crafted special edition of the international bestseller The Power of Positive Thinking, which has inspired millions through the heartfelt prescription for enjoying a more fulfilling life. --This text refers to an alternate kindle_edition edition.
Read more