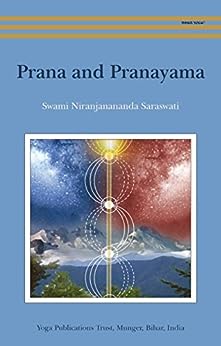 by Swami Niranjanananda Saraswati (Author) Format: Kindle Edition
See all formats and editions
Sorry, there was a problem loading this page. Try again.
Prana and Pranayama is a comprehensive text on the classical philosophy of prana, life force, and pranayama, the expansion and control of the life force. It provides a complete description of the science of pranayama as presented in the classical texts and as taught in the Satyananda Yoga tradition by Bihar School of Yoga.
The first part of the book explores the theory of prana and its related yogic concepts: koshas, chakras, nadis and mantras. Secondly, it expands upon respiratory physiology and current research undertaken by science on pranayama. In the practical section, specific guidelines for practising pranayama are given, using detailed instructions and illustrations. Throughout the text, scriptural sources further enhance the reader’s understanding, bringing to light the original essence and intent of these classical teachings.
Read more
Previous page
Next page

4.9 out of 5 stars
4.9 out of 5
60 global ratings
How are ratings calculated?
To calculate the overall star rating and percentage breakdown by star, we don’t use a simple average. Instead, our system considers things like how recent a review is and if the reviewer bought the item on Amazon. It also analyses reviews to verify trustworthiness.
Top reviews

vinay
4.0 out of 5 stars Good book on both philosophy and technicality of Pranayam
Reviewed in India on 24 April 2020
Verified Purchase
It is good for people who want a deep dive in Pranayam science. This books covers many topic sometime it feels like the reader is lost in many topics. Book is good for introduction to the Pranayam and also about the practices of the Pranayam. This book also reference many other scriptural text, if one want we can read them. This book also act as a reference book for all the Pranayam.
Read more
One person found this helpful
Helpful
Report abuse

vicky
5.0 out of 5 stars Top Class
Reviewed in India on 10 December 2017
Verified Purchase
As a person who reads lot of books, i always try to look out which would be the next miraculous book to help me gain original knowledge of our existence. I think this book surely made its way into that class of my miraculous reads. Such an indepth information. Surely recommend it.
Read more
One person found this helpful
Helpful
Report abuse

SS REVIEWS
5.0 out of 5 stars IS THERE REALLY A SIXTH DIMENSION?
Reviewed in India on 15 January 2017
Verified Purchase
If you have not read this book you are doing yourself the biggest disservice that you possibly can.

Born as a human being, you are at the peak of the evolution journey ... is this really the peak ... or is there another step?

If you are at "supposedly" at th "peak", but you have lived all your life drawing pleasures from the same 5 SENSES (Sight, Smell, Sound, Taste, Touch) that dogs, cats, monkeys have ... then maybe there is something more to think about.

There IS another DIMENSION beyond these 5 SENSES that you need to explore and the first step of this journey to this next dimension is PRANA.

Swami Niranjananda is compassionate and articulate. He holds your hand guides your through this tunnel of darkness until you see the light.
Read more
5 people found this helpful
Helpful
Report abuse

B S Gupta
5.0 out of 5 stars Excellent
Reviewed in India on 16 March 2019
Verified Purchase
Pranayama and Pranayama deals with fundamentals of our basic and essential activity pranayama the breath but we are seldom aware of it. This book describes how our pranayama affects all aspects of our life physical, physiological, mental emotional and spiritual.
Read more
One person found this helpful
Helpful
Report abuse

Kindle Customer
5.0 out of 5 stars Best book to understand science of pranayama
Reviewed in India on 4 June 2020
Verified Purchase
This is first book I read on Pranayama. Content of book gives in-depth knowledge of Pranayama science. Thanks to author.
Read more
Helpful
Report abuse

Truthseeker
4.0 out of 5 stars Great book, but issues with the Kindle version
Reviewed in India on 27 June 2019
Verified Purchase
Pages are missing, near the end at least. Other than that, a great textbook and reference to keep handy for a sadhaka
Read more
One person found this helpful
Helpful
Report abuse

Amazon Customer
5.0 out of 5 stars Excellent book.... but you need a guru to guide you..
Reviewed in India on 25 December 2018
Verified Purchase
Complete coverage of Kriya yoga...
Read more
Helpful
Report abuse

Amazon Customer
5.0 out of 5 stars Five Stars
Reviewed in India on 1 May 2017
Verified Purchase
As usual with all the BSY books, it is worth buying. Do not think.... just buy it .
Read more
Helpful
Report abuse
See all reviews

Jerry
5.0 out of 5 stars Great book
Reviewed in the United Kingdom on 3 March 2018
Verified Purchase
This is an excellent book that explains Pranayama from all angles. It explains why it's important, the different categories of exercises, and various subtleties that you wouldn't notice just from watching a demonstration (e.g. how to practice according to your level, beginner, intermediate or advanced).

Overall, a great book that any serious yoga practitioner should read.
Read more
One person found this helpful
Report abuse

Bernie Gourley
5.0 out of 5 stars The Bihar School of Yoga manual on pranayama and the requisite background information
Reviewed in the United States on 1 October 2019
Verified Purchase
This is the Bihar School of Yoga manual on pranayama, or yogic breathing exercises. The book is a one-stop reference for yoga students and teachers wishing to review the philosophy and physiology of breathing practices, as well as to put together lessons or a plan of action for practice that consists of both preparatory exercises and classical pranayama.

Students in the West may be more familiar with B.K.S. Iyengar’s “Light on Pranayama,” which offers a similar set of material and is this book’s main competitor for most readers. In my view, Swami Saraswati’s book is a bit more pragmatic and gets caught in the weeds less, but offers fewer detailed photos and is a little bit less precisely organized. If one is considering between the two books, I’d say the advantage of Iyengar is a 200-week course plan that some individuals may find a handy way to systematically advance their practice pranayama. The disadvantage of Iyengar is that he goes into vastly greater detail than most people will be able to take advantage of via book. (For example, there’s 22 pages of precise explanation of closing off one’s nostrils for digital pranayama.) In short, both books give the reader everything they’ll need in a pranayama reference, Swami Saraswati’s book is a bit more laid-back, and Iyengar’s a bit more oriented as a step-by-step instruction manual.

The twenty-one chapters of this book are organized into three parts, but we’ll call it four because the last part is divided in two sub-parts. The first part of the book is entitled, “Philosophy of Pranayama” and it dives into the definitions of prana, kosha (sheaths), chakra, nadi (channels), pranic fields, and discusses the connection between prana and chanting.

The second part of the book (ch. 8 – 13) explores the physiology of breath. This section explains the anatomy of the musculature that drives respiration (e.g. the diaphragm, intercostals, etc.), the processes of respiration and circulation, and the importance of the nose in breathing (which is more extensive than the average person could imagine.) This section also discusses the classical distinction between pranayama and rudimentary breath practices (i.e. whether there is breath retention, or kumbhaka), and has a separate chapter explaining retention. It also has a couple chapters that present the research on the benefits and effects of pranayama practice. (Full-disclosure: this isn’t up-to-date in the edition I read, and that was the 2016 -- first digital -- edition. So, I wouldn’t go here looking for information on the state of research because there’s been a virtual explosion of research that’s more recent than what is covered in the book. However, it will give one a gist what has been known for a while.)

Part III consists of two sub-parts. The first is called “Pre-Pranayama” and it includes many exercises to help one become familiar with one’s breath as well as to develop the foundational breaths (e.g. abdominal / diaphragmatic verses chest breathing) that are built upon in the final section. Part III.B presents the classic pranayama. The four chapters of this section are conveniently organized into: guidelines for practice (e.g. contraindications and general concepts to keep in mind), nadi shodhana (alternate nostril breathing), tranquilizing / calming breaths, and vitalizing / excitatory breaths.

There are five appendices as well as a glossary and two indexes (an index of practices and a general index.) The five appendices provide instruction on practices that are employed in pranayama, but are not pranayama themselves. These include supplementary practices, asana (seated postures for doing pranayama more than asana for opening the rib-cage, etc.,) mudra (“seals” postures of specific body parts), and bandha (locks). The presence of the first four appendices mean that one doesn’t have to buy other books (e.g. the APMB) to access this information. The fifth appendix gathers the sutras from “Hatha Yoga Pradipika” that deal with pranayama and provide an English translation. (HYP is a 15th century manual of Hatha Yoga that is much more detailed than Patanjali’s sutras.) There are graphics throughout the book as needed to convey information, mostly line drawings.

I found this book very useful and well presented. If there is one change that would improve the book it would be less crow-barring of science and traditional / philosophical beliefs about the body to be consistent with one another. I see the value of presenting both sets of information as both this book and the Iyengar book do, but a muddle is created by trying to force the explanations into consistency when they aren’t. (I think this book does it a bit more than Iyengar, but only because Iyengar puts much less emphasis on science than does this one.) The problem is that one ends up with low-quality pseudo-science amid the strong studies, and most readers won’t be able to tell scientific consensus and from the lunatic fringe. (e.g. The belief that kirlian photography is evidence of pranic fields or qi is far from scientifically supported.) That said, for most practitioners it doesn’t much matter as it doesn’t affect the nature of the practices, which are sound and well-described.

If you’re looking for a pranayama reference, this is a great option.
Read more
14 people found this helpful
Report abuse

Amazon Customer
5.0 out of 5 stars Five Stars
Reviewed in the United States on 16 January 2018
Verified Purchase
one of the best books out there on the subject
Read more
One person found this helpful
Report abuse

sacha Skott
5.0 out of 5 stars Five Stars
Reviewed in the United States on 24 August 2016
Verified Purchase
it is a really amazing book
Read more
One person found this helpful
Report abuse
See all reviews