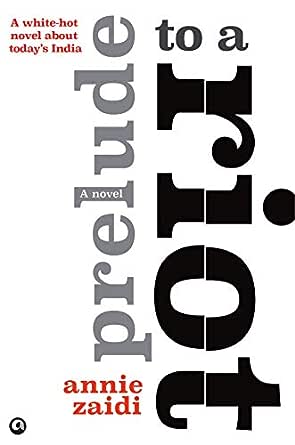 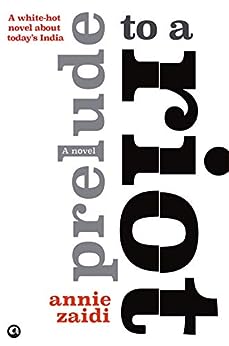 Prelude to a Riot: A Novel Kindle Edition

‘A fearless novel that speaks incisively about the divided times we live in.’– The Hindu
‘A sharp and succinct portrait of the country’s fractious present.’– Mint Lounge
‘Prelude to a Riot is marked by a keen sense of observation, a remarkable sense of place and pulsates with lithe writing, informed in no small part by Zaidi’s strength as a poet.’ – HuffPost
‘Annie Zaidi’s Prelude to a Riot captures the anger and anxiety of our times.’ – Hindustan Times
‘Zaidi’s emotionally intelligent novel is remarkable in the complexity it manages to convey.’- Open
‘A story of our times, Annie Zaidi’s new novel takes us into a peaceful town where bigots are using history as ammo to fuel hate.’ – Mid-day
‘Prelude to a Riot: A cautionary tale for the times.’ –The Hindu Business Line

Annie Zaidi is the author of Gulab, Love Stories # 1-14, and Known Turf: Bantering with Bandits and Other True Tales which was shortlisted for the Crossword Book Prize (non-fiction). She is the editor of Unbound: 2,000 Years of Indian Women’s Writing. She won The Hindu Playwright Award in 2018 for her play Untitled 1, and the Nine Dots prize in 2019 for her essay ‘Bread, Cement, Cactus’. --This text refers to the hardcover edition.

4.2 out of 5 stars
4.2 out of 5
37 global ratings
How are ratings calculated?
To calculate the overall star rating and percentage breakdown by star, we don’t use a simple average. Instead, our system considers things like how recent a review is and if the reviewer bought the item on Amazon. It also analyses reviews to verify trustworthiness.

Amazon Customer
5.0 out of 5 stars A necessary read for our dangerous times
Reviewed in India on 17 October 2019
Verified Purchase
Annie Zaidi's story could not have come sooner or at a better time. The story of simmering tensions among communities who have been living together since generations - this book presents the new found audacity of certain sections of Indian population to air their views of prejudice and bigotry with legitimacy.

The writing style is quite interesting as the reader is led on a journey of thoughts of various stakeholders involved in the game of life and death, spanning across ages, genders and geographies. No one is too young or too small to have thoughts and everyone has a story to tell. The prelude to a riot is also a necessary look at the all the actors involved in any social setting and makes you wonder about what pushes seemingly normal people over the edge. The title, too, is clever as it talks about a riot (which shows intention and action from more than one party) and the book leaves you wondering which one of these characters end up being the actors and which the acted upon.

Thank you, Annie Zaidi, for having the courage to write this.

Amazon Customer
1.0 out of 5 stars Received a Pirated copy
Reviewed in India on 4 November 2020
Verified Purchase
The book has an exact cover and is perfectly hard bound as the original , but pages are fake and of a photocopy shop quality.
Read more

Chitra Ahanthem
4.0 out of 5 stars Read this!
Reviewed in India on 4 November 2019
Complex history, convoluted present or is it convoluted history and complex present? This is foremost what Annie Zaidi positions in ‘In Prelude to aRiot’, where each character takes the reader into their most intimate personal spaces filled with their thoughts and convictions through soliloquies. Set in an unnamed location somewhere in India where there are vast estates and plantations, the focus is on the members of two families – one Hindu and one Muslims,the writing takes readers through the thoughts processes of certain characters through which one sees fissures erupting gradually.
Conversations are kept to a bare minimum between characters but each character has numerous questions and observations, perhaps mirroring the disquiet in today’s dysfunctional world where the majority has lost the art of meaningful conversations and dialogues, going instead for polarizing debates. The soliloquies are powerful and encompasses a range of pressing socio political issues we are confronted with: whose privileges comes at the cost of whom, the push and pull between ‘them’ and ‘us’ where each needs the other but is not prepared to give way.
I see this book making it to many literary award lists for next year. Go read this if you are into socio political commentary through fiction.Take this up if you are game for writing styles that break form and structure.

Mridula
4.0 out of 5 stars A very essential read. The Socio-political commentary is on point.
Reviewed in India on 14 December 2019
In an unnamed village down south, a riot is brewing. Organized with vitriolic determination by the members of the 'Self-Respect Forum', this movement is dividing people between 'them' and 'us'. Their goal is to declare themselves as the rightful owner of the land and drive out the intruders who have occupied space and ruined their peaceful settlement.
.
A powerful socio-political commentary through soliloquies, 'Prelude to a Riot' is mainly about two families, a Hindu and a Muslim family who have their ways of life but their love for their land is prominent and immense.
.
Dada's life is empty without his flowers and butterflies. After raising two grandchildren from the money from the estate, he now wants to shift his attention to his plants and live blissfully. Appa recalls the days when his clan was given guns by the Whites to bring down a Brown king. They were the 'chosen one', the rightful heir to this land they now occupy and reside in. The oldest members of these two households are unaware of the changes their ideology is about to bring and the repercussions of this war are something they cannot comprehend.
.
The youngest members of the household are struggling to pick a side and preparing themselves for the impending doom. A task that is difficult to achieve as they have grown in this community and consider each one, including the estate workers as their own. The estate workers, on the other hand, are trying to build a new world for themselves as they are exploited and treated as outcasts repeatedly.
.
"One by one, you are rent asunder. One by one, you are taught to pull in the direction of violence."
.
In a society where debate takes precedence over discussions, these soliloquies give us an insight into the minds of every significant member in the village, struggling to survive against the tides of time and shifting ideologies. As the generations change, there is a stark change in views and in spite of the differences, they are beliefs that are about to bring significant changes.
Read more
2 people found this helpful
Helpful
Comment Report abuse
See all reviews
click to open popover
Unlimited FREE fast delivery, video streaming & more
Prime members enjoy unlimited free, fast delivery on eligible items, video streaming, ad-free music, exclusive access to deals & more.
> Get started
Back to top
Get to Know Us
Connect with Us
Make Money with Us
Let Us Help You
EnglishChoose a language for shopping.
© 1996-2020, Amazon.com, Inc. or its affiliates