Share
Have one to sell?
Sell on Amazon
Flip to back Flip to front
Listen Playing... Paused   You're listening to a sample of the Audible audio edition.
Learn more.
See all 2 images 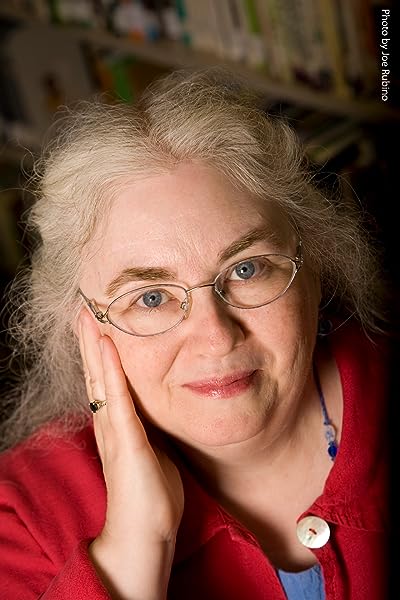 The Newbery medalist (for “Good Masters! Sweet Ladies!”) Laura Amy Schlitz’s witty writing matches perfectly with the energetic watercolors by Brian Floca, who won the Caldecott Medal for “Locomotive.” I dare you not to laugh at the pink-frocked reptile desperately trying to jump rope.
—The New York Times Book Review

Schlitz’s narrative is incredibly entertaining, with chapters that alternate between chaos at the castle and Cora’s meandering day in the woods and pastures. Featuring Floca’s hysterical full-color artwork, the book is laugh-out-loud funny...The fable is reminiscent of the finest adult-comeuppance collaborations of Roald Dahl and Quentin Blake, with the added bonus that the princess learns to speak up for herself and the grown-ups learn to listen.
—School Library Journal (starred review)

Seven spry chapters detail Cora’s much-needed day off and the crocodile’s humorous attempts to impersonate her. Copious ink, watercolor, and gouache illustrations are both delicate in their sensibility (the way princesses often are in classic tales) and witty in their execution (i.e., the crocodile is very poorly disguised).
—Horn Book

Floca’s crocodile achieves sly, good-natured ferocity tempered by the delicacy of the ink, watercolor and gouache illustrations, and the humans are just as serious and glum as they should be until Cora asserts her independence. Although divided into chapters, this standout original fairy tale can be devoured in one sitting, making it an excellent overall choice for early readers or a family readaloud.
—Bulletin of the Center for Children's Books

Readers ages 5-10 will cheer when, with the grown-ups humbled, Cora stands up for herself at last and insists on fewer baths, better books, jollier exercise—and, in place of the crocodile, a dog of her own.
—The Wall Street Journal

Hilarious art in Victorian Era style shows the crocodile cross-dress as Cora, carry on in her place (she’s off to play in the dirt) and shake up the parents, all for an important point: Princess or not, it’s worth the struggle to be yourself and make your own choices.
—San Francisco Chronicle

A Newbery Medalist (“Good Masters! Sweet Ladies!”) and a Caldecott Medalist (“Locomotive”) team up for a very entertaining feminist fairy tale of a princess who rebels against her overbearing parents in rather novel ways.
—Buffalo News

Readers will find it hard to not love this inappropriate crocodile and his Princess owner.
—School Library Connection

Timely and incisive, this one's a keeper.
—BookPage

The Dahl-esque story has a classic feel, and Floca's art blends wit and beauty. A perfect read-aloud — though adults will need a sense of humor.
—Plain Dealer

Whether you’re a Cora or a crocodile or a little bit of both, you’re bound to stand in wonder when you see what Schlitz and Floca have come up with together.
—A Fuse #8 Production (blog)

Brian Floca is the author-illustrator of the Caldecott Medal winner Locomotive, the Robert F. Sibert Honor books Moonshot and Lightship, and other picture books, and is the illustrator of many more books for young readers. Brian Floca lives and works in Brooklyn.

4.7 out of 5 stars
4.7 out of 5
96 global ratings
How are ratings calculated?
To calculate the overall star rating and percentage breakdown by star, we don’t use a simple average. Instead, our system considers things like how recent a review is and if the reviewer bought the item on Amazon. It also analyses reviews to verify trustworthiness.

Amazon Customer
3.0 out of 5 stars I Thought It Would Be Funny
Reviewed in Canada on 24 May 2020
Verified Purchase
It struck me as odd that the reviews on the book cla it as hilarious. I must have a poor sense of humour. This book wasn't funny or enjoyable for myself or my 5yo. We both found it dry.
Read more
Report abuse

ACP101010
5.0 out of 5 stars Fun and funny and wise. An instant classic.
Reviewed in the United States on 6 June 2018
Verified Purchase
Cora, who is a Very Good Girl, winds up with something she doesn’t want but truly needs: a Very Bad Crocodile! Full of joy and silliness and mischief and mayhem, it also teaches some deep and wise lessons about knowing and feeling one’s own feelings, and having the courage to speak up for one’s own needs, even when the people in charge, who are supposed to be wise, don’t want to listen. Something many children may need to hear — and may be a few grownups, too!

I would recommend this for all young readers. The language may be a little advanced for age 4, depending on the child, but the ideas and the illustrations will still carry the story; the language in the concepts could probably be interesting up through age 7 or 8, because there is enough to take from the story and the pictures as a jumping off point for further conversation. The mad, bad, wild, butt-biting crocodile also adds enough interest for any children who, on the face of it, might resist a story that seems to be about a nice princess.

On the negative side, it’s unfortunate that this is yet another children’s book that seems to show the world as consisting only of Caucasian people. The princess & castle type of story takes place in a fantasy Early Europe, when “European” was synonymous with “Caucasian.” So the author is just being consistent with this. Still, if we can imagine talking, magic crocodiles, maybe we can imagine less homogenous human characters in our contemporary books. This may be a consideration for families, like ours, that seek diversity in their reading.

Anna
3.0 out of 5 stars ”I wish I was dead"
Reviewed in the United States on 20 June 2020
Verified Purchase
It's a good story how ever the crocodile throws a temper tantrum and wishes he was dead. Then princess cora gives him cream puffs. It definitely not something I want my kids hearing, repeating, or thinking that that is ok in anyway shape or form.
Read more

4 people found this helpful
Report abuse
See all reviews
Unlimited FREE fast delivery, video streaming & more
Prime members enjoy unlimited free, fast delivery on eligible items, video streaming, ad-free music, exclusive access to deals & more.
> Get started
Back to top
Get to Know Us
Connect with Us
Make Money with Us
Let Us Help You
EnglishChoose a language for shopping.
© 1996-2020, Amazon.com, Inc. or its affiliates