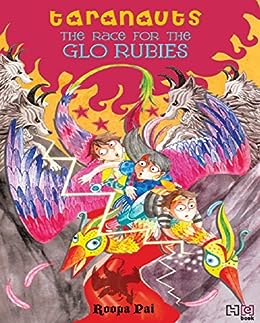 The Race for the Glo Rubies (Taranauts Book 4) Kindle Edition

by Roopa Pai (Author) Format: Kindle Edition
See all formats and editions
Sorry, there was a problem loading this page. Try again.
Three worlds shining on to the fourth!

Race away with the Taranauts to another heart-stopping adventure – at Glo! Mithya's eight worlds - Shyn Lustr Sparkl Glo Dazl Shimr Syntilla and Glytr – were plunged into darkness when the wicked Shaap Azur captured all its 32 stars. There was no hope until Zarpa Tufan and Zvala - three bright and brave Taranauts with special gifts - set out to bring back light and cheer to Mithya.

With three successful rescues under their belts the Taranauts head west determined to notch up another win against their foes. But things take a nasty turn right at the start - the Marani of Glo is taken hostage! What’s worse Ograzur Dusht now has a secret agent in the Taranauts’ camp a spy who is known only by the code name Dro Hie.

Can the Taranauts get safely across the fearsome Budbudana and the treacherous cliff paths of Pur Butte? Will they survive the motion-sensitive lightning hurlers of Wilderwolf Gorge? Does the pink-crested warbler break up Zarpa and Zvala's friendship forever? And who is the traitor Dro Hie? Will Glo get its Rubies back? Read and find out A Childrens Bookshelf Selection: Each month our editors pick the best books for children and young adults by age to be a part of the childrens bookshelf.

These are editorial recommendations made by our team of experts. Our monthly reading list includes a mix of bestsellers and top new releases and evergreen books that will help enhance a childs reading life.
Read more
Previous page
Next page

The fourth in the imaginative, witty and fast-paced adventure series for children --This text refers to an alternate kindle_edition edition.

Roopa Pai has won a children's Book Trust award for science writing. Among her published works are a four-book science series, Sister Sister (Pratham Books). When she is not dreaming up plots for her stories, she goes on long bicycle rides, and takes children on history and nature walks in Bangalore. --This text refers to an alternate kindle_edition edition.

4.7 out of 5 stars
4.7 out of 5
13 global ratings
How are ratings calculated?
To calculate the overall star rating and percentage breakdown by star, we don’t use a simple average. Instead, our system considers things like how recent a review is and if the reviewer bought the item on Amazon. It also analyses reviews to verify trustworthiness.
Top reviews

Ankur Kalita
5.0 out of 5 stars Excellent
Reviewed in India on 3 January 2020
Verified Purchase
My son has recently read and reviewed Taranauts 4 THE RACE FOR THE GLO RUBIES. Please check his book review on you tube. Simply search Aarohan Kalita on you tube
Read more
Helpful
Report abuse
See all reviews