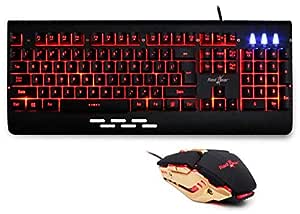 Size: 2 in 1 Combo
Technical Details
Additional Information
Warranty & Support
Warranty Details: 1 year warranty provided by the manufacturer from date of purchase
Feedback
Would you like to tell us about a lower price?
If you are a seller for this product, would you like to suggest updates through seller support?

Dinker Chaudhary
5.0 out of 5 stars Review of Redgear Manta MT21 Gaming keyboard and mouse after 7 days of usage
2 October 2017
Size: 2 in 1 ComboVerified Purchase
I got this product from amazon in 1 day delivery. Amazon never disappoints me when it comes to packaging and delivery, always on point.

Now lets talk about our keyboard and mouse.

What do we get inside the box?
1) A cd to configure our mouse
2) A quick start guide
3) A gaming mouse
4) A membrane gaming keyboard

The keyboard comes in black colour with 3 colour leds (i.e red, purple and blue). The base of the keyboard is full metal ehich gives it a sturdy and stiff look and provides it durability. It has 104 keys which are made of good quality plastic and guarantees around 10 million keystrokes. There are 3 backlid led colours provided. You can chsnge the colour of the keyboard according to your needs or you can set it to automatic colour changing by pressing the FN+Scr Lk key. The cable which will used to connect our keyboard with laptop or pc is braided cable which is going to increase its lifespan and makes it last longer. The keyboard uses floating key architecture which makes the keys sufficiently spaced and allows the user to easily distinguish between the keys and provides a good gaming experience.

Mouse
The mouse comes in black colour with gold colour at sides which gives it a premium look. The size of the mouse is perfect to fit under your palm. The shape of the mouse makes it perfect for long gaming hours.
It has 6 keys which csn be configured via the software provides in the cd which is in the box. The mouse also comes with braided cable to improve its lifespan. 5/5 for that. This gaming mouse with redgear also comes with 3 colour changing leds which changes its colours on its own.

The Manta MT21 makes use of flotaing key architecture to give players the fastest response time possible.The keys on this membrane keyboard do their best to mimic mechanical switches, and do an admirable job of it. With a stylish appearance and a reasonable price tag of ₹1700 , i would say it's both comfortable and functional.

The mouse really looks good and with those leds in dark it becomes even more beautiful. The mouse comes with six programmable buttons and the size of the mouse makes all the buttons reachable to even the tiniest hands. : The Manta gaming mouse comes with a 3200dpi optical sensor. Capable of mouse movement speeds of up to 50inches per second.

The leds on the mouse can not be fixed to one colour.
They could have added more led modes to the keyboard rather than only two modes.

Final opinion
So guys i would say that in this price range this membrane gaming keyboard is one of the best in the market, with all the features packed in and a sturdy build quality this keyboard can definitely withstand long gaming hours.

AM
2.0 out of 5 stars Only suitable for WASD gamers
31 August 2018
Size: 4 in 1 ComboVerified Purchase
(Note: I'm a hardcore gamer, not a casual gamer, so these points, though they seem silly, are very important for my gaming).

I have these primary problems:

Keyboard:
1. Key rollover doesn't work for Numpad keys. When I press Up-Arrow, Left-Arrow and Numpad-0 keys simultaneously, the Numpad-0 functionality doesn't work. This is a deal-breaker for gamers who don't use WASD, and still use the old Arrow keys for movement. Come on RedGear, even the basic Logitech K270 keyboard handles this properly, even though that is not a gaming keyboard.
2. The Numpad/Caps Lock/Windows Lock lights are ridiculously bright, and for some reason are angled to hit you directly under your eyes. Why?? There is a white coating on that LED cover, facing away from the user, covering the LED up completely would have been much easier on the eyes.
3. The keys are raised far too high. Again, probably a problem only for the Arrrow-key users, you will by mistake press the Ledt-Arrow while pressing the Up-Arrow.

Mouse:
The mouse is uncomfortable (maybe it's just me), my hand is hurting, something that many other mice have not done.

Headphone:
The headphone (as others have mentioned) isn't great at bass, but if I increase the volume to double the usual level I set it to, it seems fine. The over-head band however, is way too tight (there are two bands, the lower band is the problem). I had a headache the first day I used it, seems to be getting better the more my head is getting used to it.

I really wanted to like this product, given the good ratings, but sadly, some of us will be better off using a basic Logitech keyboard/mouse, rather than this supposedly 'gaming' gear. The fact that this is a budget gaming gear is very evident.

To make matters worse, apparently, I can't return this, I can only get this exchanged. That's 2.5k gone down the drain.
Read more
49 people found this helpful
Helpful
Comment Report abuse

M.V.GANESH
5.0 out of 5 stars Excellent quality. Don't think it's expensive. It's worth the bucks.
18 January 2018
Size: 2 in 1 ComboVerified Purchase
Its has been 3months since i bought this combo. Got it for 1500. Till now it's working fine... Will post detailed review later. Keyboard body is made out of aluminum... It's just like that old tvs mechanical keyboard except that it's not mechanical but membrane one. Mouse is made out of hard plastic (better than the cheaper ones like the basic 500 bucks dragon war mice) and the bottom is made out of stainless steel)
Read more

Build Quality: 7/10
Look: 9/10
Static color is red and it cannot be changed.
Mouse light cannot be turned off.

For 1.5k I would recommend this.
Read more
24 people found this helpful
Helpful
Comment Report abuse

I am totally satisfied....

The sound of headphones is crisp and bass is damn good...

Keyboard is also good but my spacebar key has some problems..... Because I dropped the keyboard by mistake.....

The response time is good....

The mouse mat is also very good in quality.... Although I didn't expect it to be... 😊

If you're looking for a gaming set combo.... It is the best in this price range.....
Read more

J.J.A
5.0 out of 5 stars Excellent, good and beautiful
10 September 2017
Size: 4 in 1 ComboVerified Purchase
Really very good product, my son loves the lighting effect mainly in the headphone. Very strong Keyboard and replaceable caps. In this price you won’t get any combo lower than this price. Simply go for it, if you need wired gaming keyboard combo. Worth it
Read more
18 people found this helpful
Helpful
Comment Report abuse

Shashikanth
1.0 out of 5 stars The keyboard was an utter disappointment.
29 August 2018
Size: 2 in 1 ComboVerified Purchase
I have been utterly disappointed with this product as it was damaged when I got it and some of the keys on the keyboard board were not working. So I recommend all the buyers to check all the keys after they buy this product and I am returning this product.
Read more
13 people found this helpful
Helpful
Comment Report abuse
There are 1,248 customer reviews and 1,401 customer ratings.
See all 1,248 customer reviews
Write a product review
Pages with related products. See and discover other items: mechanical keyboard, mouse and keyboard combo, mechanical gaming keyboard, Best Rated in Keyboard & Mouse Sets
Unlimited FREE fast delivery, video streaming & more
Prime members enjoy unlimited free, fast delivery on eligible items, video streaming, ad-free music, exclusive access to deals & more.
> Get started
Back to top
Get to Know Us
Connect with Us
Make Money with Us
Let Us Help You
EnglishChoose a language for shopping.
© 1996-2020, Amazon.com, Inc. or its affiliates