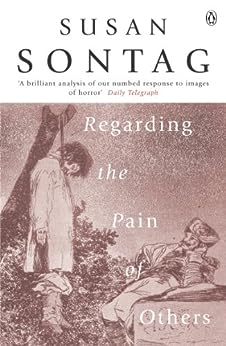 Regarding the Pain of Others Kindle Edition

Susan Sontag was the author of four novels, including The Benefactor, Death Kit, The Volcano Lover, and In America, which won the 2000 National Book Award for fiction; a collection of stories, I, etcetera; several plays, including Alice in Bed; and nine works of essays, among then On Photography, which won the National Books Critics Circle Award for criticism. In 2001, Sontag was awarded the Jerusalem Prize for the body of her work. She died in New York City in 2004. --This text refers to the paperback edition.

“Wise and somber. . .Sontag's closing words acknowledge that there are realities which no picture can convey.” ―Los Angeles Times Book Review

“The history of sensibility in a culture shaped by the mechanical reproduction of imagery....has always been one of the guiding preoccupations of her best work, from Against Interpretation to The Volcano Lover....Regarding the Pain of Others invites, and rewards, more than one reading.” ―Newsday

“For 30 years, Susan Sontag has been challenging an entire generation to think about the things that frighten us most: war, disease, death. Her books illuminate without simplifying, complicate without obfuscating, and insist above all that to ignore what threatens us is both irresponsible and dangerous.” ―O, The Oprah Magazine

“A timely meditation on politics and ethics. . .extraordinary . . .Sontag's insight and erudition are profound.” ―The Atlanta Journal-Constitution

“Regarding the Pain of Others bristles with a sense of commitment--to seeing the world as it is, to worrying about the ways it is represented, even to making some gesture in the direction of changing it. . .the performance is thrilling to witness.” ―The New York Times Magazine

Sontag, one of our most perceptive and valiant thinkers, offered a seminal critique of camera-mediated images in On Photography. Now, 25 years later, photographs and video of the bloody consequences of terrorism and war routinely fill the media, and Sontag offers a fresh, meticulous, and deeply affecting dissection of the role images of suffering play in our lives. Do photographs and television footage of the injured and dead serve as "shock therapy" or merely elicit a momentary shudder before they're forgotten? Do images of systematic violence engender compassion and antiwar sentiments or arouse hunger for revenge? Writing with electrifying clarity and conciseness, Sontag traces the evolution of the "iconography of suffering" from paintings by Goya, to photographs of concentration camps, to the first live and in-color war coverage to rage across television screens, that of the Vietnam War, to images of the destruction of the World Trade Center taken by amateurs and professionals alike. Sontag parses the difference in our response to images of terrorism at home versus abroad, and forthrightly addresses our pornographic fascination with images of the wounded and dead. Ultimately, Sontag, scrupulous in her reasoning and exhilarating in her arguments, arrives at a paradox: although we're inundated more than ever before by stark visual evidence of the "pain of others," we've yet to increase our capacity to do something about it. Donna Seaman
Copyright © American Library Association. All rights reserved --This text refers to the hardcover edition.
Read more

4.6 out of 5 stars
4.6 out of 5
314 global ratings
How are ratings calculated?
To calculate the overall star rating and percentage breakdown by star, we don’t use a simple average. Instead, our system considers things like how recent a review is and if the reviewer bought the item on Amazon. It also analyses reviews to verify trustworthiness.

mansi mudgal
5.0 out of 5 stars To better understand the book and her views
Reviewed in India on 18 March 2018
This is the second volume by Sontag on photography, and it is in many ways a continuation of the investigations of the first book. To better understand the book and her views, I'd suggest that the reader needs to read 'On Photography' first.
Sontag starts her essay by talking about Virginia Woolf’s Three Guineas, and Woolf's rejection of the assumption that all feel the same way about war.
The book talks about the history of war photography, which is intimately bound with the history of public tolerance of violent photos, During the course of reading, I had to look up several examples cited by the author, the horrors of Vietnam War, World War, the 1857 Sepoy rebellion in India etc. which turned out to be difficult but necessary and eye opening.
While Sontag does not provide any revolutionary ideas, the essay is a succinct and thorough examination of the issues surrounding photography.
A photograph cannot immediately transmit understanding. A photograph cannot help us understand what it is to fight and kill in war or to have to dig up bombs or lose loved ones. A photograph, though a means of objectifying and transmitting memories, lacks context for a more complete individual understanding of events. It is equally about what does not make it to the frame than what does! What are we not seeing? Is the left out version not equally important? Or even more important?
Even though Sontag does not offer us a grand thesis to keep in mind or a solution to the issues that plague photo journalism, she gives us thought-provoking observations. She notes, for example, that displaying photos of dead bodies is less taboo the more foreign and exotic those bodies are, how staged photos in today's time are used to generate distrust and enmity between communities and countries

Tariki
5.0 out of 5 stars Well worth reading
Reviewed in the United Kingdom on 28 October 2019
Verified Purchase
For anyone shocked, even ashamed, by their very own prurience in observing the suffering and pain of others, this is worth reading. We are bombarded with images of war, of the agony of other human beings. It seems whatever reaction we have, or even how perversely attractive such observation is, we can perhaps never actually fully know the reality of any "other". I believe - is it faith? - that in knowing ourselves in our full depths we CAN come to know. "The Tao can be shared but never divided", and "differentiation does not mean separation". In knowing, we act, rather than merely feel.
Read more
One person found this helpful
Report abuse

Josh H
3.0 out of 5 stars A good read but flawed
Reviewed in the United Kingdom on 12 November 2020
Verified Purchase
An interesting analysis by sontag, but lacking in good argument and reason to back up her ideas. Well written and an interesting read for those concerned with the ethics of photography.
Read more
Report abuse

Pat Garrett
4.0 out of 5 stars wonderful
Reviewed in the United Kingdom on 26 May 2017
Verified Purchase
a worthy addition to the Sontag collection of works.....wonderful insight
Read more
2 people found this helpful
Report abuse

moeva rinaldo
5.0 out of 5 stars Five Stars
Reviewed in the United Kingdom on 17 August 2018
Verified Purchase
A lovely book thanks.
Read more
Report abuse
See all reviews
Back to top
Get to Know Us
Connect with Us
Make Money with Us
Let Us Help You
EnglishChoose a language for shopping.
© 1996-2021, Amazon.com, Inc. or its affiliates