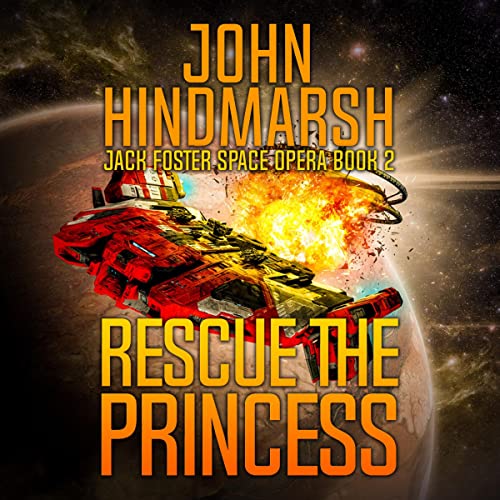 Jack suffered from an attack by the Blue Caps. He sued the RSN and won. He also sued the Royal Family and won. Now he’s acquired his own warship and his first mission is to rescue the princess. What? Yes, Sofia is missing. The Queen has taken an intense dislike to her daughter’s ambitions, and Sofia has disappeared. Jack sets out to rescue her with the assistance of Black Company marines. The task is not as easy as it seems. Join Jack and his bot and AI friends as they search for the missing princess. First, they must survive sabotage and alien threats. In the meantime, has Sofia, battered and bruised, rescued herself?

4.5 out of 5 stars
4.5 out of 5
2,835 global ratings
How are ratings calculated?
To calculate the overall star rating and percentage breakdown by star, we don’t use a simple average. Instead, our system considers things like how recent a review is and if the reviewer bought the item on Amazon. It also analyses reviews to verify trustworthiness.
Top reviews

Big John
5.0 out of 5 stars Jack Foster for President
Reviewed in the United Kingdom 🇬🇧 on 18 November 2021
Verified Purchase
Without a doubt this story is calling out to be into a film. This second instalment fairly leaps along, keeping you the reader enthralled with all his setting do!
Ably supported by his AI bots who keep everything running along nicely.
Rescuing the Princess was quite easy but keeping her is another part of the story.
If the next book follows on like this book then everyone is in for a right rollicking adventure.
Thoroughly recommended.
Read more
Report abuse

Jim Needham
5.0 out of 5 stars Wayhay, what a brilliant read.
Reviewed in the United Kingdom 🇬🇧 on 24 November 2021
Verified Purchase
I thought the first Jack Foster was a good read, but I think this one caps it.
It keeps you locked in all the way through, with twists and turns you just don’t expect.
A brilliant story line full of danger and intrigue, space travel and battle grounds. The kind of book that is hard to put down.
Read more
Report abuse

Haywain
5.0 out of 5 stars Fast pace from start
Reviewed in the United Kingdom 🇬🇧 on 13 January 2022
Verified Purchase
Absorbing from the start
Twist and turn drawing you in surprisingly fun and interesting directions
Great read 2nd in series as good as 1st
Read more
Report abuse

Iain Gold
5.0 out of 5 stars Yes it does hit the spot...
Reviewed in the United Kingdom 🇬🇧 on 6 July 2022
Verified Purchase
It's great when you've got the next one to jump to; yes implausible, but great read. Interesting angle on friendly and otherwise ais
Read more
Report abuse

Adrian Hannam
5.0 out of 5 stars Loving this series
Reviewed in the United Kingdom 🇬🇧 on 25 March 2022
Verified Purchase
If you like an exciting, action packed space opera then this series is for you. I can't wait to read no 3 in the series!
Read more
Report abuse
See all reviews