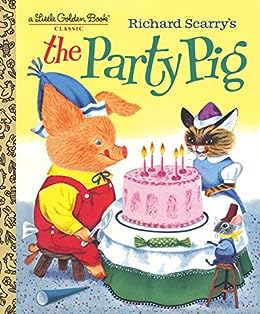 This sweet story about a kindly little pig who gives away all the food that has been set aside for his birthday party—and about his friends who make it up to him with the best party ever—is back in print in the Little Golden Book line! Originally published in 1954 and one of Scarry's early projects for Golden Books, it has not been available for decades. This fun read-aloud with adorable animal characters is sure to become a new family favorite!
Read more
Previous page
Next page
Kindle Fire Tablets
Free Kindle Reading Apps
Available on these devices

Kathryn Jackson wrote hundreds of lively, witty stories for Golden Books, most of which were coauthored with her husband, Byron. The Saggy Baggy Elephant is one of the pair's most famous titles. Golden Books that Kathryn Jackson wrote on her own include Tawny Scrawny Lion, Nurse Nancy, Pantaloon, Richard Scarry's The Animals' Merry Christmas, and Richard Scarry's A Story a Day: 365 Stories and Rhymes.

Byron Jackson (1899–1949), along with his wife Kathryn Jackson, wrote hundreds of classic and well-known stories, poems, and books for Golden Books, including The Saggy Baggy Elephant, Tawny Scrawny Lion, and A Day at the Seashore.

4.9 out of 5 stars
4.9 out of 5
44 global ratings
How are ratings calculated?
To calculate the overall star rating and percentage breakdown by star, we don’t use a simple average. Instead, our system considers things like how recent a review is and if the reviewer bought the item on Amazon. It also analyses reviews to verify trustworthiness.
Top reviews

EricTheFish
5.0 out of 5 stars So cute
Reviewed in Canada on 22 July 2020
Verified Purchase
This is SUCH. A. CUTE. BOOK! Got it for my daughter’s birthday and it turned out she and Party Pig turned 5 the same day:) A very charming story about generosity and selflessness, with beautiful illustrations. They really don’t write ‘em like this anymore. There’s nothing like the Little Golden Books classics... they are the kids favorite books every time, and mine too.
Read more
Report abuse

Maddiemoiselle
5.0 out of 5 stars Charming tale of generosity
Reviewed in Canada on 25 August 2021
Verified Purchase
What a sweet little story! I was so invested in kind little pig’s happiness —he truly deserved his happy ending.
Read more
Report abuse

Homeschool Mom
4.0 out of 5 stars Plot holes
Reviewed in the United States on 29 December 2021
Verified Purchase
Like the shrewd manager in Luke 16, a poor pig gives away all of his birthday supplies and gains friends that can help him in his time of need. His generosity is rewarded many times over. My 2 year old loves this book-- I suspect for the pictures and key words/phrases "birthday", "party", "I'm hungry." The trite tone is a lot like Watty Piper's The Little Engine That Could. As a reader, I have a lot of questions. Why are these supposedly needy people raiding Pig's pantry, only to return with more later that very day? Don't they have parents? Why does Pig give a small mouse ALL the cheese and CANDY? Cheese maybe, but CANDY?! Why doesn't he give the hen just 1 egg? A hen is not going to lay 12 eggs in a day. Why doesn't Pig's mother go back to the store when there are still 5+ hours until the party? Why is she leaving this naive little Pig alone at home when he clearly cannot make good decisions. This book was not made to be analyzed. Maybe this plot line is what drove Richard Scarry to write his own books...
Read more
Report abuse

Cheryl Boyd
5.0 out of 5 stars A trip down memory lane
Reviewed in the United States on 24 September 2021
Verified Purchase
Doing some decluttering and came across a very tattered copy of this book. I remembered how much I loved this book as a kid (I'm 72). Went to Amazon immediately and was thrilled to find out it had been reissued several years ago
Read more
One person found this helpful
Report abuse

ken
5.0 out of 5 stars Love this story
Reviewed in the United States on 22 January 2020
Verified Purchase
I have an original copy (1954) and have kept it from my childhood. I ordered this for a friends grandchildren.
Read more
Report abuse
See all reviews
Back to top
Get to Know Us
Connect with Us
Make Money with Us
Let Us Help You
EnglishChoose a language for shopping.
© 1996-2022, Amazon.com, Inc. or its affiliates