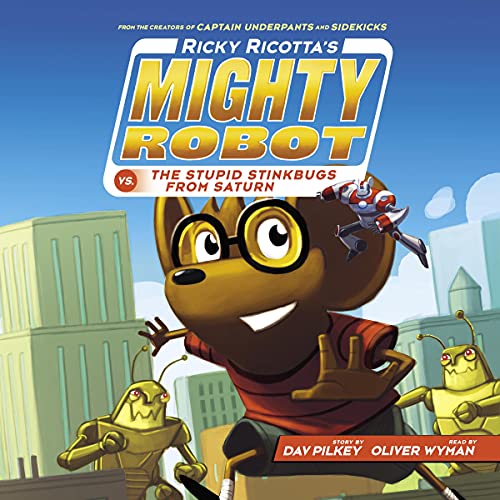 Ricky Ricotta and his mighty robot are in another stinky situation!

Ricky's family is headed to Cousin Lucy's house for lunch - how boring! Ricky and his robot are hoping to have a little fun with Lucy's pet Jurassic Jackrabbits, but when they get there, Lucy makes them play princess with her instead! What could be worse?

An invasion of Stupid Stinkbugs from Saturn, that's what! Smelly Sergeant Stinkbug has arrived on Earth with a plan to kidnap its ruler, and Princess Lucy fits the bill. Now it's up to Ricky and his mighty robot to plug their noses and send those stinkers back into space!

4.8 out of 5 stars
4.8 out of 5
561 global ratings
How are ratings calculated?
To calculate the overall star rating and percentage breakdown by star, we don’t use a simple average. Instead, our system considers things like how recent a review is and if the reviewer bought the item on Amazon. It also analyses reviews to verify trustworthiness.

se1tuse1tu
5.0 out of 5 stars Great stories..
Reviewed in the United Kingdom 🇬🇧 on 6 January 2016
Verified Purchase
These are great books and the boys love them
Read more
Report abuse