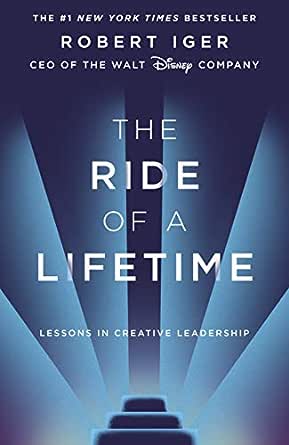 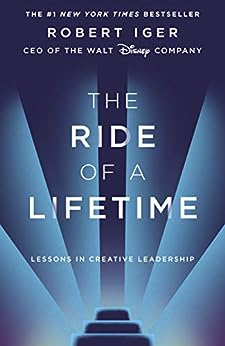 The Ride of a Lifetime: Lessons in Creative Leadership from the CEO of the Walt Disney Company Kindle Edition

“I expected a book written by the person who has led Disney for decades to be defined by both gripping storytelling and deep leadership wisdom. Bob Iger delivers, and then some! The Ride of a Lifetime is leadership gold—you won’t forget the stories or the lessons.”—Brené Brown, #1 New York Times bestselling author of Dare to Lead

“Nurturing creativity is less a skill than an art—especially at a company where the brand alone is synonymous with creativity. That’s a lot to live up to. Bob Iger has not only lived up to ninety-six years of groundbreaking history but has moved the Disney brand far beyond anyone’s expectations, and he has done it with grace and audacity. This book shows you how that’s happened.”—Steven Spielberg

“People have been waiting years for Bob Iger to share his leadership secrets. Now he has, and they are utterly brilliant. The Ride of a Lifetime is not merely a memoir; it’s a personal, all-access session with the wisest CEO you’ve ever met and a playbook for handling the key challenges of our age: how to drive change, leverage technology, build an enduring culture, and empower people. It’s a rippingly good, revelatory read.”—Daniel Coyle, New York Times bestselling author of The Culture Code

The CEO of Disney, one of Time’s most influential people of 2019, shares the ideas and values he embraced to reinvent one of the most beloved companies in the world and inspire the people who bring the magic to life.

Robert Iger became CEO of The Walt Disney Company in 2005, during a difficult time. Morale had deteriorated, competition was intense, and technology was changing faster than at any time in the company’s history. His vision came down to three clear ideas: Recommit to the concept that quality matters, embrace technology instead of fighting it, and think bigger—think global—and turn Disney into a stronger brand in international markets.

Fourteen years later, Disney is the largest, most respected media company in the world, counting Pixar, Marvel, Lucasfilm and 21st Century Fox among its properties. Its value is nearly five times what it was when Iger took over, and he is recognized as one of the most innovative and successful CEOs of our era.

In The Ride of a Lifetime, Robert Iger shares the lessons he’s learned while running Disney and leading its 200,000 employees, and he explores the principles that are necessary for true leadership, including:

Optimism. Even in the face of difficulty, an optimistic leader will find the path toward the best possible outcome and focus on that, rather than give in to pessimism and blaming.
Courage. Leaders have to be willing to take risks and place big bets. Fear of failure destroys creativity.
Decisiveness. All decisions, no matter how difficult, can be made on a timely basis. Indecisiveness is both wasteful and destructive to morale.
Fairness. Treat people decently, with empathy, and be accessible to them.

This book is about the relentless curiosity that has driven Iger for forty-five years, since the day he started as the lowliest studio grunt at ABC. It’s also about thoughtfulness and respect, and a decency-over-dollars approach that has become the bedrock of every project and partnership Iger pursues, from a deep friendship with Steve Jobs in his final years to an abiding love of the Star Wars mythology.

“The ideas in this book strike me as universal” Iger writes. “Not just to the aspiring CEOs of the world, but to anyone wanting to feel less fearful, more confidently themselves, as they navigate their professional and even personal lives.”

Shawmit Choudhary
5.0 out of 5 stars Insightful and Compelling
21 October 2019
Format: PaperbackVerified Purchase
Such books dont come along very often. Robert Iger is a business legend after his performance as CEO of Disney and it was incredible reading about his rise from being a weatherman to the CEO of the largest entertainment company in the world. The book is insightful and theres a lot to learn from the experiences shared by Mr Iger. The only complain I would have from this book is that it was a little too brief at times and could have been more detailed. I felt under 300 pages did not do complete justice to his legendary career. Having said that, its still one of the best books ive read in a long time. A must read.
Read more
7 people found this helpful
Helpful
Comment Report abuse

Jaidev Shah
5.0 out of 5 stars Recommended for all working people - includes business owners
25 November 2019
Format: HardcoverVerified Purchase
humble honest and hard working - thats how i would describe Robert Iger and his account. At no point does he sound pompous. The book is not written in terms of lessons. Its more like he narrates the lessons he learnt as he grew older and mature. I would recommend this to almost any executive or business owner.
Read more
3 people found this helpful
Helpful
Comment Report abuse

Partho Banerjee
5.0 out of 5 stars Powerful Leadership Insights
31 October 2019
Format: PaperbackVerified Purchase
In this book, Bob Iger, a successful CEO himself, encapsulates 10 great leadership lessons that are applicable not just for the CXOs but for anyone who wants to add drive, focus and structure to their professional lives. It capture anecdotes by the author on how he traversed this journey to serve from entry level roles to the CEO for 15 years making key strategic acquisitions! Recommended reading.
Read more
2 people found this helpful
Helpful
Comment Report abuse

Amazon Customer
5.0 out of 5 stars An amazing book
15 February 2020
Format: Kindle EditionVerified Purchase
Couldn't put it down without finishing it. It was a compelling read. Thanks to the author for writing it. It is endearing & reassuring to learn that people with great values thrive in business world, where contrary seems to be the norm.
Read more
Helpful
Comment Report abuse

Aseem Juneja
5.0 out of 5 stars From of the Best CEOs in the world comes book of a lifetime !!
28 December 2019
Format: PaperbackVerified Purchase
My favourite genre of books is biographies/ autobiographies of business leaders ! This is one of the top 5 amongst nearly a 100 that I must have read ! This guy is so smart in the way he went on to acquire Pixar , marvel and Lucas film ! He’s one heck of a CEO ! One of the best ! Great book !
Read more
Helpful
Comment Report abuse

Majid Kazi
4.0 out of 5 stars Excellent Read!
15 November 2019
Format: Kindle EditionVerified Purchase
A very good read for leaders, especially those working with knowledge-driven/creative teams. Good lessons on people management, spotting opportunities, and respecting talent. Unlike the biographies of founders, this one is about someone who rose through the corporate ranks from bottom.
Read more
Helpful
Comment Report abuse

Smira Rao
5.0 out of 5 stars Must read - great book
2 February 2020
Format: Kindle EditionVerified Purchase
Truly an inspirational leader. Reading about the acquisitions was fascinating because all of us have seen how beautifully they have worked for Disney - the only constant is change and ability to welcome rather than be afraid of disruption.
Read more
Helpful
Comment Report abuse
There are 11 customer reviews and 27 customer ratings.
See all 11 customer reviews
Write a product review

Go to Amazon.com to see all 405 reviews 4.8 out of 5 stars
click to open popover
Unlimited FREE fast delivery, video streaming & more
Prime members enjoy unlimited free, fast delivery on eligible items, video streaming, ad-free music, exclusive access to deals & more.
> Get started
Back to top
Get to Know Us
Connect with Us
Make Money with Us
Let Us Help You
EnglishChoose a language for shopping.
© 1996-2020, Amazon.com, Inc. or its affiliates