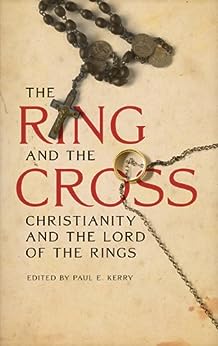 The Ring and the Cross: Christianity and the Lord of the Rings Kindle Edition

As a contribution to a―if not the―polemical area of Tolkien studies, The Ring and the Cross is commendable not only for looking at both sides, but also for reflecting those many shades in between where most opinions fall. The collection’s civility and single-volume format more than likely belie the true friction and disparity of opinions on its topic, but the willingness to publish together is at least a willingness to engage one another, and that can never be a bad thing. ― Mythlore

To a reader who is more a Tolkien fan than a Tolkien scholar, Kerry appears to have been successful in both his aims.... This book will be enjoyed by most of those who don't mind prospecting for literary nuggets in broad fields of scholarship. ― Touchstone: A Journal Of Mere Christianity

Not only does the collection capture the theological traditions and complexity of Tolkien’s written world, The Ring and the Cross further promotes the cross-pollination of religious studies and literary criticism, aptly showing both disciplines more than merely interrelated. Indeed, what The Ring and the Cross demonstrates is that the theological underpinnings of a literary work are indispensable to thoroughly responsible criticism. In the case of Tolkien’s chef-d’oeuvre, if Kerry’s diagnosis of contemporary Tolkien scholarship is correct― that ‘all signs seem to indicate that Tolkien’s writing will continue to provoke, inspire, and provide rich food for thought about its relation to religions and spirituality generally, and Christianity in particular.’―then The Ring and the Cross should continue to carry the Ring into even deeper recesses of religion-literary criticism. ― The Journal of the Fantastic in the Arts

Professor Paul E. Kerry’s ambitious project – to bring together leading academic voices in the burgeoning area of Tolkien Studies to debate and explore the influence of Christianity on Tolkien’s works is a success. Fourteen scholars of literature, theology, history, political science, and philosophy have contributed to Kerry’s volume, lending it an interdisciplinary (and inter-confessional) range and depth that is unique for a work dealing with these particular questions. It should be read by any fans or students of Tolkien – Christian or otherwise, from university professors to mature high schoolers seeking a rigorous gateway into a deeper grasp and appreciation of one of the greatest storytellers in the English language. . . .This collection of essays feature many other relevant debates and discussions that are well worth the time of a casual fan of Tolkien who seeks to learn more, or of a seasoned student or scholar deepening their knowledge and study of a profound corpus of writing. ― Journal of Inklings Studies

While the relationship between Tolkien's personal religious convictions and his fictional works has been explored in the past, this collection now brings together many of the common arguments and approaches, situating them in context with one another and offering the reader a. . .cohesive view of the conversation. . . .Christian readers and scholars interested in Tolkien's Middle-earth fictions, or of the relationship between myth-making and person religious faith in general, will find this anthology accessible, useful, and thought-provoking. ― Christianity and Literature --This text refers to the paperback edition.

Paul E. Kerry is an associate professor of history at Brigham Young University, research associate at Corpus Christi College and visiting fellow at the Woolf Institute, Cambridge. --This text refers to the paperback edition.

4.1 out of 5 stars
4.1 out of 5
4 global ratings
How are ratings calculated?
To calculate the overall star rating and percentage breakdown by star, we don’t use a simple average. Instead, our system considers things like how recent a review is and if the reviewer bought the item on Amazon. It also analyses reviews to verify trustworthiness.
Top reviews

G in Ohio
2.0 out of 5 stars very dull
Reviewed in the United States on 3 June 2019
Verified Purchase
I'm not saying individual essays aren't good. But these are veery academic. Some are abstruse and some focused on minute points. If you're interested in interpretations of LOTR, go for some of the popular books on the subject. If you're interested in some of the topics, it's a good reference. But to read through? Very dull.
Read more
2 people found this helpful
Report abuse