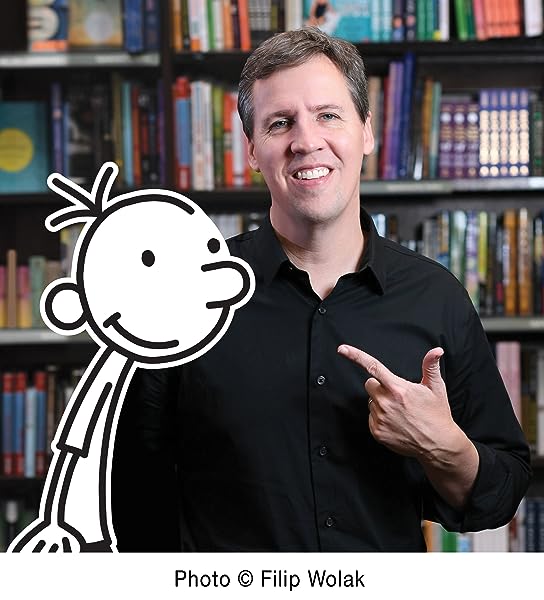 Bank Offer: 10% instant discount up to Rs. 1500 on minimum order of Rs. 5,000 with SBI Credit Card and Credit EMI Details
Cashback (2): Get 25% back* with Amazon Pay Later. Valid on 1st Pay Later transaction. Check eligibility here! See All
No Cost EMI: Avail No Cost EMI on select cards for orders above ₹3000 Details
Partner Offers (2): Buy 3, Get 8% extra off; Buy 4 or more, Get 10% extra off from this list Offered by Cloudtail India See All
See 2 more
10 Days Replacement Only
Amazon Delivered
No-Contact Delivery
Amazon Delivered
Amazon directly manages delivery for this product. Order delivery tracking to your doorstep is available.
No-Contact Delivery

The books contain meaty themes to do with family and friendship . . . more please -- The Telegraph

No-one does the straight to camera narrative style of the diary better than Kinney ... This is as authentic and funny as the original Wimpy Kid books and makes just as irresistible reading -- Andrea Reece ― LoveReading4Kids Reviewer

Jeff Kinney is the #1 USA Today, New York Times, and Wall Street Journal bestselling author of the Diary of a Wimpy Kid series and a six-time Nickelodeon Kids' Choice Award winner for Favourite Book. Wrecking Ball, book 14, was published in November 2019, and was an instant #1 global bestseller. Diary of an Awesome Friendly Kid: Rowley Jefferson's Journal was published in April 2019, was an instant #1 global bestseller. Jeff has been named one of Time magazine's 100 Most Influential People in the World. He is also the creator of Poptropica, which was named one of Time's 50 Best Websites. He spent his childhood in the Washington, D.C., area and moved to New England in 1995. Jeff lives with his wife and two sons in Massachusetts, where they own a bookstore, An Unlikely Story.

Start reading Rowley Jefferson's Awesome Friendly Adventure on your Kindle in under a minute.

4.7 out of 5 stars
4.7 out of 5
1,851 global ratings
How are ratings calculated?
To calculate the overall star rating and percentage breakdown by star, we don’t use a simple average. Instead, our system considers things like how recent a review is and if the reviewer bought the item on Amazon. It also analyses reviews to verify trustworthiness.

Amazon Customer
1.0 out of 5 stars Not worth it and much worse than the previous ones
Reviewed in India on 5 August 2020
Verified Purchase
the whole book is just about greg and rowley arguing about a book and the changes that greg tells rowley to add are raarely implemented also the book that they create is extremely boring. This was the worsw book i have read in the whole series and this is coming from a person who read all the wimpy kid books. The first book of rowley was much better.
Read more
12 people found this helpful
Helpful
Report abuse

Anonymous
5.0 out of 5 stars Wow
Reviewed in India on 5 August 2020
Verified Purchase
Great book funny and I so adore Jeff Kinney for eriting so funny books
Read more

vivek
5.0 out of 5 stars very good book
Reviewed in India on 4 August 2020
Verified Purchase
this book was much better than I expected . I especially liked the part where Roland and Garg the Bambarian have to go save his mom from the white wherlock

Justine Mathew
5.0 out of 5 stars A Great Read
Reviewed in India on 15 August 2020
Verified Purchase
The Book is absolutely amazing and my son just loves it...
Filled with the imagination of Rowley and also the help from Greg, this book is truly to be a good read...
It's like the fantasy novels, but a little childish and a touch from Rowley...
If you ask me, the break between the story and Rowley's time, was a bit of a problem, but the story does make up for it making it a must read...
Should read this if your a Wimpy Kid fan, or more, a Rowley Jefferson fan...
Read more

Amritesh Mukherjee
4.0 out of 5 stars A simple, fun read...
Reviewed in India on 11 January 2021
Verified Purchase
Sidekicks. I deeply despise this word.
As if the word itself reflects the neglect these secondary protagonists face.

Don't they deserve to be the face of the story too? Haven't they been sidelined because of some twist of fate or a required plot point? And more importantly, aren't they protagonists in their own story? So why should the story be all about the so called heroes or our protagonists?

Swarming flocks of soldiers standing on either side of the battlefield. Every single pair of eyes keen and aware and bloodshot. They were born for this. They will die for this. As Captain Samuel raised his sword, the soldiers charged. It was a battle for glory, for superiority, for the nation. Did you see? We don't give two cents about those millions of nameless soldiers. All we care about is that one man. Why is the lives of those soldiers expendable and not of that captain?

After all, what is Sherlock Holmes without John Watson, Frodo without Sam, Ram without Lakshman, Liesel without Rudy, Harry without Ron and Hermione, Han Solo without Chewbacca, Achilles without Patroclus, and Batman without Robin?

Or as in this context, what is Greg without Rowley? The latter, who mostly comes off as a stupid comic relief in the Wimpy Kid series, gets to share his own viewpoint via the Awesome Friendly Kid series.

Coming to the book now, while I preferred the first one, this is quite funny in a silly sort of way.

The book begins with Rowley writing a mediaeval fantasy story before, as usual, Greg jumps in the bandwagon and decides that he should turn it into a global phenomenon (the ever dreamer!). Book rights, movies, toys, merchandise: he brings it all in for a story Rowley intended to be read by his dad only.

"I said there aren't any seahorses in the story but Greg said that didn't MATTER because once someone buys the book you've got their money."

What ensues is a messy mashup of a story which is (largely) influenced by what's happening in Rowley's life. As always, the book is written in a way to be devoured in one sitting, rejuvenating you in the process.
Read more

Sibi
3.0 out of 5 stars Kiddish and not very good..
Reviewed in India on 2 September 2020
Verified Purchase
Never seen a dumb book like this before. The book is like there is a chapter in which rowley uses imagination and create a story up and at the end of every chapter Greg will tell him to make changes like how he can make it better then there comes another chapter and again again and again this is going on.. I almost gave up reading this book . 😑😕😕
Read more

MS
5.0 out of 5 stars The best book I have ever read
Reviewed in India on 21 August 2020
Verified Purchase
I like books with wizards and stuff. Congrats Jeff Kinney! You have used your imagination to write this book. I really loved the part where the One-Eyed Wizard told Roland the truth that Roland's mom wasn't kidnapped. And all the other parts were good too. Keep it up, Jeff! And write more books!
Read more
Helpful
Report abuse
See all reviews

Gergely Szilvasy
5.0 out of 5 stars Number 3! still on the podium!
Reviewed in the United Kingdom on 5 August 2020
Verified Purchase
third reviewer huh? deserves a bronze medal. No I'm only kidding, ha ha.

aaanyway, I would like to say how awesome this book was and how much I enjoyed it. here we go…
GOOD STUFF:
- creative ideas
- goofy illustrations
- quirky writing style
- great ending

BAD STUFF:
hmm where are all the bad stuff?
yep, looks like there's no bad stuff at all in this book…
welp, looks like i gotta get going then, see y'all later!
Read more
9 people found this helpful
Report abuse

B. A. Taylor
5.0 out of 5 stars Grandson loves these books
Reviewed in the United Kingdom on 7 September 2020
Verified Purchase
Bought as Christmas present for grandson, who loves reading this author.
He’ll love it.
Read more

5.0 out of 5 stars Grandson loves these books
Reviewed in the United Kingdom on 7 September 2020
Bought as Christmas present for grandson, who loves reading this author.
He’ll love it.

Mrs B
5.0 out of 5 stars Jeff kinney you are a genius! I want to be a author just like you!
Reviewed in the United Kingdom on 5 August 2020
Verified Purchase
I have read all your wimpy kid books and there AWESOME! I have also read Rowley Jefferson's books and there there I don't know how to describe it! Well I love, love , love it! And by the way, I am not Mrs B I am Rhema Benson .Anyway, I support you to carry on writing!Plus, I am really looking forward to the deep end!Bye!
Read more
2 people found this helpful
Report abuse

R-tron
5.0 out of 5 stars Great series of books for boys.
Reviewed in the United Kingdom on 15 November 2020
Verified Purchase
For my 9 year old son.
He is not a book worm and reading anything other than the Beano is a chore for him but he loved this and read if from cover to cover.
My older son, now 13 is a book worm and worked his way through the series a few years ago, he read this one in an an hour or so.
Both boys also enjoy the audio book versions which they have listened to time and time again.
Read more
One person found this helpful
Report abuse

Amazon Customer
5.0 out of 5 stars THIS BOOK IS AWESOME
Reviewed in the United Kingdom on 12 August 2020
Verified Purchase
I love the wimpy kid series but this is on a whole new LEVEL.