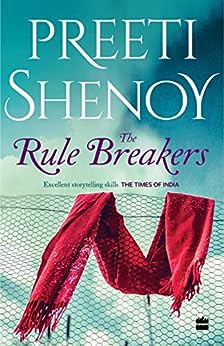 by Preeti Shenoy (Author) Format: Kindle Edition
See all formats and editions
Sorry, there was a problem loading this page. Try again.

There are two kinds of people in this world-those who follow the rules and those who do not think twice about breaking them. Studious, smart and sincere, Veda harbours big dreams for the future. But her parents arrange a marriage for her, and the twenty year old discovers that she has no say in the matter. Forced to leave behind an idyllic life in the hill town of Joshimath-filled with conversations and pleasurable times with her siblings, and her best friend, the handsome Suraj-she puts aside her ambitions and moves into a flat in Pune with an indifferent husband and a mother-in-law from hell. Though brought up to be quiet and obedient, Veda chafes at the meaninglessness of her existence and struggles to cope with the unexpected loneliness she is engulfed in. Then, amidst the dark clouds of stagnation and despondency, Veda carves out the unlikeliest of silver linings. How does she do this? By breaking the rules? Or by following them? In this emotional roller-coaster of a novel, Preeti Shenoy treads bold new ground yet again.

Preeti Shenoy, among the top five highest selling authors in India, is also on the Forbes longlist of the most influential celebrities in India.. Her work has been translated to many languages.She is India's most loved author, on life and relationships.

India Today has named her as being unique for being the only woman in the best-selling league. She has been awarded the ‘Indian of the Year’ award for 2017 by Brands Academy for her contribution to Literature. She has also received the Academia award for Business Excellence by the New Delhi Institute of Management. She has given talks in many premier educational institutions such as IITs and IIMs and corporate organisations like KPMG, Infosys and Accenture. She is also an artist specialising in portraiture and illustrated journalling.

Her short stories and poetry have been published in various magazines such as Conde Nast and Verve. She has been featured on BBC World, Cosmopolitan,The Hindu, Verve, Times of India and many more.

She has a very popular blog and also wrote a weekly column in The Financial Chronicle for many years. She has a massive online following. Her other interests are travel, photography and yoga. Her books include A Hundred Little Flames, It’s All In The Planets, Why We Love The Way We Do, The Secret Wish List, The One You Cannot Have and many others.

4.0 out of 5 stars
4 out of 5
1 global rating
How are ratings calculated?
To calculate the overall star rating and percentage breakdown by star, we don’t use a simple average. Instead, our system considers things like how recent a review is and if the reviewer bought the item on Amazon. It also analyses reviews to verify trustworthiness.