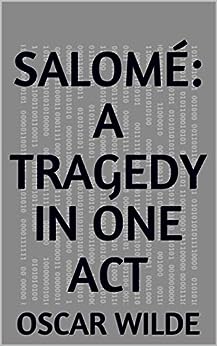 Salomé: A Tragedy in One Act Kindle Edition

by Oscar Wilde (Author) Format: Kindle Edition
See all formats and editions
Sorry, there was a problem loading this page. Try again.
Salomé: A Tragedy in One Act by Oscar Wilde
Read more
Previous page
Next page

Donohue has set himself the task of rendering Wilde's French tragedy in 'an up-to-date, colloquial yet spare English translation' that could be performed on stage today. His work reads smoothly, and he's breathed life back into the play... The ominous Barry Moser engravings also establish the time and place mercifully free of a single Beardsley peacock feather.Shelf Talker: A smooth, effective translation of the infamous 1893 Oscar Wilde play, accompanied by a fascinating essay on the play's history, its successes and scandals. --Shelf Awareness This is an impressive achievement, rendering into clear and effective modern English an important play not well served by the standard translation. The effect is not unlike that of seeing a painting that has been restored. In the words of Miss Prism, it has been a great inconvenience being without it all these years. --Russell Jackson, Allardyce Professor of Drama, University of Birmingham --This text refers to an alternate kindle_edition edition.

Few works in English literature have so peculiar a history as Oscar Wilde's play Salome. Written originally in French in 1892 and ridiculed on its publication, translated into English by Lord Alfred Douglas ("Bosie" himself) and again heaped with scorn, it has survived for 75 years, served as the text (in abridged form) for Richard Strauss' world-famous opera, and emerged as an acknowledged masterwork of the Aesthetic movement of fin de siecle England.
The illustrations that Aubrey Beardsley prepared for the first English edition have no less strange a story. Beardsley liked neither the play nor its author. Yet, it inspired some of his finest work. It is an open question as to how suited the drawings actually are to the text that Wilde wrote. Yet, the two, the play and the Beardsley illustrations, have nevertheless become so identified with each other as to be inseparable.
This edition reprints the first edition (1894) text, with "A Note on 'Salome'" by Robert Ross. The Beardsley drawings it superbly reproduces (mostly from a rare early portfolio) include not only the 10 full-page illustrations, the front and back cover designs, the title and List of Illustrations page decorations, and the cul de lampe from the original edition, but also three drawings that were not used, an alternate cover sketch, and the drawing entitled "J'ai baise ta bouche, Iokanaan, " which Beardsley did earlier for The Studio. Furthermore, all of the illustrations are reproduced in their original state, not as expurgated in the first and most subsequent editions. " --This text refers to an alternate kindle_edition edition.

Oscar Wilde (1854 1900) was born and raised in Dublin, Ireland. Wilde studied at Trinity College in Dublin and at Magdalen College in Oxford, England, before settling down in London and having a long, successful career as a poet, playwright, and author. Wilde is best known for his novel The Picture of Dorian Gray and for his satirical play The Importance of Being Earnest. --This text refers to an alternate kindle_edition edition.
Read more

4.4 out of 5 stars
4.4 out of 5
64 global ratings
How are ratings calculated?
To calculate the overall star rating and percentage breakdown by star, we don’t use a simple average. Instead, our system considers things like how recent a review is and if the reviewer bought the item on Amazon. It also analyses reviews to verify trustworthiness.
Top reviews

PJ
5.0 out of 5 stars very attractive edition
Reviewed in the United Kingdom on 22 February 2011
Verified Purchase
I went for this edition because I've always found Dover books attractive to look at and handle, which this certainly is. I also thought the larger size would be better for the Beardsley illustrations. It's spaciously laid out with cream pages and I think it's well worth paying a bit extra for. My interest in the play was because of Strauss's use of it as the libretto for his opera . I wasn't expecting much from the play itself and I was surprised how powerful it is. From the start there's an ominous feeling in the air and the atmosphere is heavy with obsession, lust and moral decay. The language is often beautiful and exotic. It gave me a much greater appreciation of Strauss's music and as a result I bought the CDs of the opera after reading this.
Read more
8 people found this helpful
Report abuse

Amazon Customer
1.0 out of 5 stars No illustration
Reviewed in the United Kingdom on 3 April 2020
Verified Purchase
Already had a copy of Salome
Most displeased
Advertised as having Beadsly illustrations
Nowt
Will complain
Falsely advertised

Mrs. Deborah O'Hara
5.0 out of 5 stars Five Stars
Reviewed in the United Kingdom on 8 February 2018
Verified Purchase
every civilised home should have one
Read more
2 people found this helpful
Report abuse